IT’S NEVER TOO LATE TO BE GREAT (GOLDEN TATE III)

Watching the Detroit Lions in London was like watching a Prison Football team. No concept of picking up blocks, Stafford running for his life, along with the Lions Defense allowing the Chiefs to convert every 3rd down. Defensive Holding, Roughing the Passer. It was a nightmare to watch.

The Lions offense was showing a lot of promise leading up to the firing of Joe Lombardi as Stafford was the best QB in Fantasy Football Week 6- (1 Quarter) Week 7. Since then everything has gone downhill. The Lions offense is getting sacked everytime Stafford drops back, and the defense cannot get off the field. Lions promoted QB coach Jim Bob to Offensive Coordinator, again Stafford continues to get sacked.

The Bye Week could not come at a more perfect time for the Lions. Yes, the Lions are done as far as making playoffs. It has been a disappointing season where a team went 11-5 with an injured Megatron in 2014, and are now 1-7 with Mega at Full Strength all year (up until the last drive for the Lions).

Injuries to the defense, forgetting how to block, and maybe losing Suh/Fairley has been the main reason this team cannot win games. Now the Lions are on Bye Week and they can decide from here what direction they want to go.

The Lions can either learn how to block, play smart as a team, and look to ruin other teams seasons. Or just throw in the towel and have all Lions fans jump on the Andre Drummond wagon before December.

Assuming that the Lions will play hard to close out the season because people have Contract Bonuses for hitting certain bench marks and Jim Caldwell may want to coach in the NFL again. The Lions will start playing better football. When Matt Stafford has time to throw, he can deliver some throws that remind you why he was on your roster in the first place.

The Lions have a very cupcake schedule the rest of the way as far as Defensive matchups. Including a Week 15 Playoff Game against the Saints on Monday Night Football, then a Home Game against Blaine Gabbert and the 49ers. 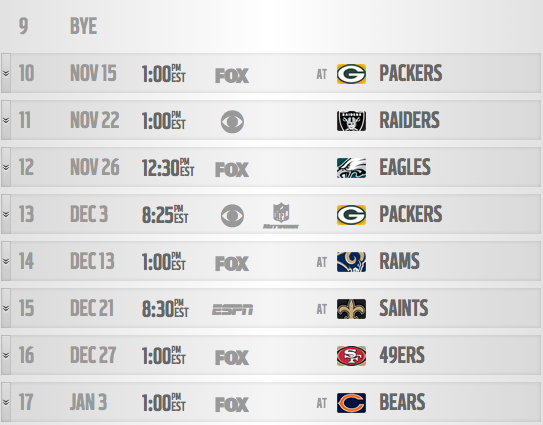 With a good showing in Week 10, win or lose, Stafford becomes nearly matchup proof the rest of the way. The Rams Secondary does not scare me when you have a QB like Stafford, what does scare me is the offensive line and not protecting Staff. Week 10 we will see if we can trust Stafford to be our BEAST to close out the season. No Place like Dome.

With all that lets talk about Golden Tate. Everyone who owns Golden Tate has no problem dropping him for the next big thing at WR if he is on the back of their bench. The Lions offense has looked horrible, and the only reason things are looking up is because of the potential of talent this Lions offense can produce.

Now is the time to swipe Golden Tate in all leagues for the price of very little. James Jones straight up is a good trade for Tate if you were not able to swap him for CJ Anderson like I suggested last Week.

With Davante Adams now healthy James Jones will be more hit or miss than usual. Yes his TDs have saved him, but now they have to really save him as there will be a few less targets heading his way to close the 2015 season. I have seen leagues where Golden Tate is a Free Agent, so his price cannot be too high. James Jones is close to a good MAX, Brandon LaFell is about as even as it gets in the Buyers Eyes.

You are reaching for some magic Bye Week lotion to cure Matt Stafford and the Lions. It cured the Dolphins, it has cured Jonathan Stewart, it has cured CJ Anderson, and now the Lions will have an extra week to figure out how to get Matt Stafford time to throw to all his options in the new and exciting Jim Bob Lions Offense.