The Bye Week (7) can do wonders for a Football team. A team that cannot win a game, will come out like the Miami Dolphins and blowout two squads like it is nothing. A player that is a little beat up or not playing great, can come out of the Bye Week looking like it is Week 1 and he is back to full strength, Jonathan Stewart.

Today we are going to talk about CJ Anderson. Anderson looked like a BEAST this preseason. Picking up 7+ yard gains whenever he wanted and had a burst that reminded us all why Montee Ball would never be the Broncos RB again. Then again, Montee reminded us all why Montee would never the Broncos RB again with his poor performance and afraid to make a big play because he was worried about fumbling.

Week 1 of the NFL season against Baltimore, CJ Anderson messed up his foot. He decided to play on a bad foot in Week 2 against a good Chiefs run defense, had a bad game. Decided to play again in Week 3 against a healthy Lions Defense at the time, had a bad game. Deemed himself near 100% against the Vikings in Week 4, watched Ronnie Hillman take a 72 yard TD to the house, which then started the 50/50 split. Did nothing Week 5 against the Raiders, then watched Ronnie Hillman take 7 more carries against the Browns while also rushing for over 100 Yards.

While CJ Anderson may have said his toe/foot was 100% early on in the season after getting injured. Truth is you have to rest your injuries in order to really heal them. CJ Anderson was wearing special shoes, and he never really looked explosive. He could of forced the issue to play a little injured because he knows if Ronnie Hillman really went off with Anderson on the sidelines, there would be no turning back.

The best part about CJ Anderson’s game was his role in the passing game. He often was the clear #3 option and made some very big catches to convert 3rd downs. While Ronnie Hillman has looked a little more explosive this season than CJ Anderson, the Broncos want CJ Anderson to be their #1 RB. He was a Pro-Bowl BEAST out of nowhere in the middle of last season, and they all know he has the ability to reach that level again. With a good schedule coming up, it is time for the Broncos to feed their BEAST and remind us all why CJ Anderson was a 1st Round Pick on Draft Day in most leagues. 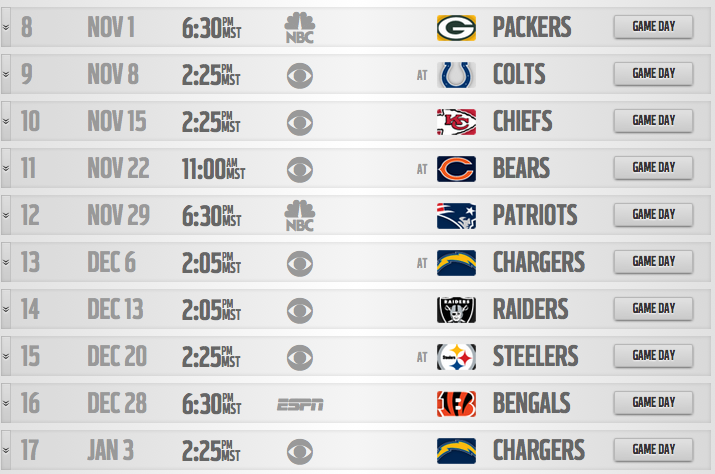 The best part about grabbing CJ Anderson in a trade is that his value is no longer anywhere near where it was in Week 1. If you want CJ Anderson is not going to cost you a BEAST. If you can get CJ Anderson straight up for James Jones, consider that a steal. If you need to throw in James Jones and a RB #3/#4 quality the trade is worth it.

If the CJ Anderson owner wants a RB like Eddie Lacy or another under performing star, the only way you make that trade is if he vastly improves the 2nd player in the trade. Example.

Point is, do not offer a BEAST. Offer a player that has performing very well above his expectations, James Jones/CJ2K/Carson Palmer, Etc. In return ask for the 1st Round BEAST who has been playing like a RB that is borderline Waiver Wire Quality.

In conclusion. You are buying a player with major upside and you are taking a chance, which has a high % of being correct, that CJ Anderson is going to be looking much more explosive than he had all season with the extra week of rest coming off the Bye Week.