We Must Protect This Forte (Matt Forte)

The Chicago Bears offense had a lot of promise heading into the 2015 Fantasy Football season. New Head Coach John Fox from Denver bringing in Offensive Coordinator aka Peyton Manning and Drew Brees call sheet holder, Adam Gase. Jay Cutler was ready to have a comeback of the year season, the team drafted Kevin White in the 1st Round.

Then things have gone from worse, to worst to start this 2015 season. Kevin White done for the year before it even started. Alshon Jeffery never recovered from his Hamstring injury during the preseason, and chances are he still may not be 100% even if he does play this Sunday. They just lost starting Tackle Jermon Bushrod which is a bad loss considering that this O-Line is definitely less than average in comparison to talent around the league. You also have Jay Cutler who has a bad hamstring and he may be out Week 4 and potentially longer. He could also return this week, more on that later.

With that being said, the Bears are officially in Fire Sale mode and it is only Week 4. With the Bears about ready to throw in the towel, there is a lot of speculation that Matt Forte will be moved to a contender as he is 30 Years Old and in a contract year. The only problem is the Bears want to get a lot of value, and teams usually don’t give up a lot of value for a mid-season trade. The Chicago Bears appear to be going with the strategy of auditioning Matt Forte this Sunday against the Raiders. It could lead to big fantasy success, but it could also be a situation where the Bears will pull Forte after he has shown his value to avoid injury.As a Matt Forte owner, you too have to be shopping him around. Only difference is, you should be shopping him around this week instead of waiting for Sunday.

The art of the Trade is everything in Fantasy Football, it is all about convincing the other owner that he/she is getting great value for a player that could potentially be a huge BUST, even if he is traded. How often do we see a player get traded to a team mid-season, and retain that same BEAST quality. Unless we are talking Fantasy Baseball or Fantasy Basketball, rarely ever. Most recent big names in Fantasy Football to be moved mid-season.

While Matt Forte is a much more talented player than T-Quizz and Carson Palmer. He will still likely be traded to a team that already has a RB since all the teams that are interested already have a RB they are comfortable with in their system. Let us say hypothetically Forte gets traded to the Dallas Cowboys.

Forte gets traded after Sunday.
Week 5 learning playbook. Joseph Randle has another week to gain momentum on job.
Forte gets some action.

If you are in this situation with Matt Forte, you could have up 3 unproductive weeks from Matt Forte. If your record is 1-2 or 0-3 heading into this Sunday, you cannot afford this downtime. Even if your record is 3-0, you are giving your opponents a chance to catch up as your top pick will not be the same BEAST you drafted and all watched during Week 1.

Now let us say hypothetically Matt Forte stays on the Bears for whatever reason since he will not re-sign and the Bears will likely not offer a 30 year old a big contract when the team is in rebuild mode. The Bears could finish this season with potentially 6 wins Max. If Jay Cutler returns this week and they pull off the mini upset against the Raiders, maybe 7. Still, not a great number but at least it will do, there is also a chance the Bears run Jeremy Langford a lot to see if he has long-term potential once Forte is gone. So here is the move and the strategy if I was a Matt Forte owner and I was talking to someone in my league making a trade.

Let us say the guy I am talking to is named Barry, he has Marshawn Lynch.

Munt: Barry, I got a trade offer for you. Matt Forte and James Jones for Marshawn Lynch.
Barry: I am going to hold onto Lynch.
Munt: Forte is going to blow up this week, Bears going to audition him and next thing you know it he will be on a contender team. Do I really need to say anything about James Jones? Clear #2 option in the Packers passing game.
Barry: It’s ok I am going to keep Lynch.

If Barry says that, say ok and does not want to trade, then try to propose the trade next week or one more time if there is any bad news about Lynch from this day forward.

Next, let us talk to Rachel who owns CJ Anderson and a superstar WR. In this case, Megatron.

Munt: Rachel, I got a trade offer for you. Matt Forte and James Jones for CJ Anderson and Calvin Johnson (do not call him Mega if you are trying to trade for him).
Rachel: I am not that high on Matt Forte.
Munt: The Bears are going to feed him the ball all day Sunday and next thing you know it he will be on a contender team. CJ Anderson just got his 2nd concussion and Ronnie Hillman will be an X-Factor all season long.
Rachel: Ok I want Steve Smith instead of James Jones.
Munt: Done.

There you have it. Anything less than those trading options, you are selling a little too high and it is best to cross your fingers for Week 4 like the Chicago Bears. 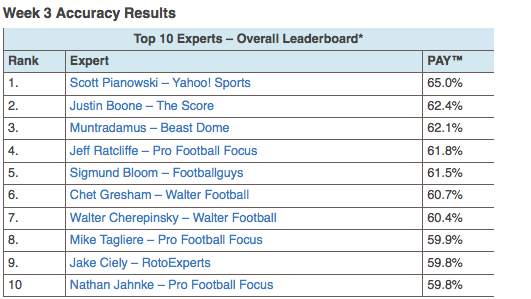 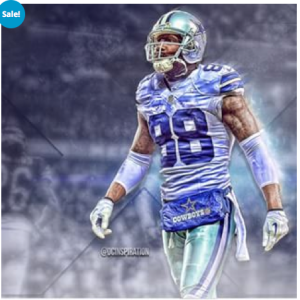 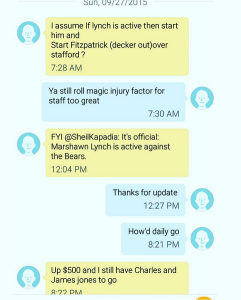