Drafts are still premature.  People are making mistakes and not thinking like they should.  Everything from superstar QBs dropping to the 3rd Round, to 1st Round Talent at other Positions Dropping to the 4th.  Below explains it all.

ARTICLES THAT WILL HELP YOU COME DRAFT DAY

SLEEPERS/BUSTS ACCORDING TO MY RANKINGS THROUGH
WEEK PRESEASON WEEK 2 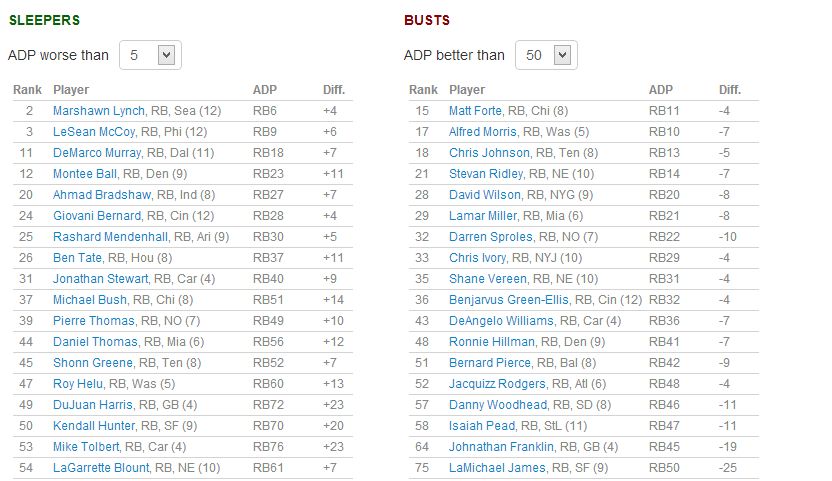 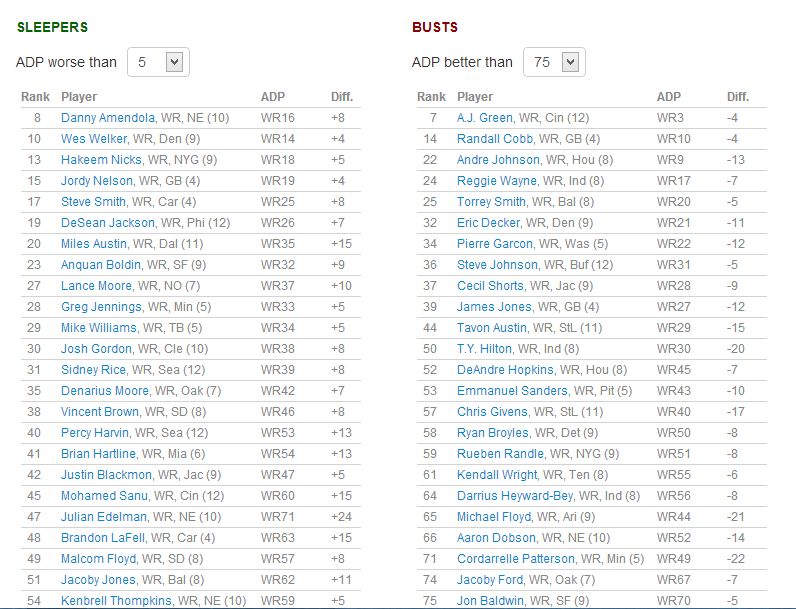 TIER 1 QBs Going in 3rd Round

Last season if you were able to get Aaron Rodgers outside of Round 1, you could possibly have the best steal of your draft.

This season Fantasy owners are going with the theory that the Tier 1 is not important and you can get good quality running QBs later on.  While I do agree with the potential being there for the Running QB, I would still take any of the star Tier 1 QBs in Round 2.  Peyton Manning/Aaron Rodgers/Drew Brees will be the highest scoring players in your league.

IF YOU MISS OUT ON TIER 1 QB

Your team is fine.  Depending on your league, there is still HUGE value late.

Eli Manning/Tony Romo go as the #10/#11/#12 QB Range in most leagues.  Both of these QBs have the weapons to dominate this season.  I would just wait and grab one of them.

Miles Austin/Dez Bryant/Jason Witten.  Besides Austin who is a low-end WR #2, Dez/Witten Must-Start every week.

Hakeem Nicks/Victor Cruz/Brandon Myers. Besides Myers who is a high-end TE #2, Nicks/Cruz borderline Must-Start every week.

D-Thomas/Welker/Decker. Besides Decker who is a high-end WR #3, Welker/D-Thomas Must-Start every week.

Nelson/Cobb/Jones/Finley.  Besides Jones who is a middle tier WR #3, Nelson/Cobb/Finley are Must-Start every week.

Colston/Moore/Graham. Besides Moore who is a low-end WR #2, Colston/Graham are Must-Start every week.

Jones/White/Gonzalez.  All are Must-Start for Matt Ryan.

Unless you want players like Christopher Ivory or Lamar Miller as your #2/#3 RB.  Do yourself a favor and draft RB/RB/RB/RB

Even if he starts the season on the PUP and misses the first 6 Weeks of the season.  DeAnglo Williams is not the RB he was back in 2003.  The Panthers allowed DeAnglo to walk after his contract expired so he can see the market.  The market was not giving DeAnglo anything, so he signed a contract with the Panthers that puts him in the backup price Range.

Now that the Panthers are not obliged to play DeAnglo because of his contract, you can expect Jonathan Stewart to be a full-time RB when healthy.  It is a long season, and for the past three seasons we have been waiting for this moment.  Draft him when everyone lets him off the board.

All of these players were boarderline WR #1 type players, and all of them are coming into 2013 with more hype than they have had the last couple of seasons.  No reason you should be drafting star WRs when you end up with Lamar Miller as a starting RB.  As oppposed to drafting star Running Backs and ending up with these great WRs.

MONTEE BALL GOING TO GO IN ROUND 3

If your draft is after Saturday, you will have to spend a 3rd Round Pick at the latest to get Montee Ball.  He is in prime position to take over the job, and all it takes is a few really impressive runs.  Ronnie Hillman fumbled away his opportunity, Knowshon Moreno is not better than Montee Ball no matter how you try to explain it.

ROB GRONKOWSKI WILL BE BACK BY WEEK 3

That is great news for Fantasy Football owners.  Gronk is a BEAST and should be drafted in the 3rd Round of every Fantasy Draft.  He is now currently being drafted in the 4th, which is a HUGE steal if that opportunity comes to you.  Come playoff time in Fantasy Football, the last thing you want to do is face a good team that also has Gronk at TE.  He will be a BEAST with no Aaron Hernandez.

IF YOU MISS OUT ON GRONK

Look at Fred Davis/Julius Thomas as a Late Combo.  Charles Clay is also an excellent sleeper.  I have both Ranked so much higher than the field, that the Sleeper/Bust Tool on FantasyPros cannot compute it.