The time is finally here.  The strategy I will be using on Draft Day has been figured out, and I am here to share it with you.  If you are a V.I.P member, you will have my official CHEAT SHEET which will be released on Muntradamus.NET this weekend. My Cheat Sheet has alternative Strategies and is tailor made to Rank every single player in Order as well as have the backups to select per player.

Coming Up This Weekend In The Dome

I used Munt for fantasy football and fresh off that amazing 9 game win streak. Seeing all the articles and the camaraderie on the site got me juiced for fantasy baseball season.  I selected the VIP Package and he laid out a draft plan, with specific players to target through the first 10 rounds, and alternate options if the plan went awry.  Luckily for me the plan did not go awry and I walked away from the draft with a large population of the Beastdome must haves for the year. And just as Munt predicted. My team has been dominant.  I have a 22 game lead in my division.  And it has been pretty much smooth sailing all year. As injuries have arisen, Munt has kept up to date with sometimes weekly check in’s on how our team is doing.  Also G-Chats for questions on pitching.  And the must important part is letting me know when to buy and sell on certain players has helped me play and keep our team as a front runner.  Given these results in baseball and the success I had with Munt in football last year. I am counting down the days to football season and ready to win a championship with my secret weapon by my side all year. Thanks Munt

To make a draft strategy, you first have to understand every position.  Follow along as I am giving you a Blueprint to win your Championship, even if you are not a V.I.P., you can still win your Fantasy Football League through BEAST DOME.

Being a V.I.P. makes it easier.

In Mock Drafts and ADP value, Aaron Rodgers and Drew Brees are taken in the 2nd Round of many 12 man Fantasy Football drafts.  Leaving Peyton Manning in the early 3rd Round.  While it might make sense to just grab Peyton, I would not do it.  QB is a position in Fantasy Football that goes deep.  If you can grab a TE BEAST in Rob Gronkowski or Jimmy Graham.  I would grab them to get the all-around team.

QBs like Russell Wilson/Colin Kaepernick/Robert Griffin III all go past the 6th-7th Round range in Fantasy Leagues.  The play here would to grab one of them as soon as that pick arrives.   There are only Two TEs who will put up consistent monstrous numbers at the position.  Make sure to grab the star TE with the 3rd Round Pick.

If you end up with one of those Speedy QBs in Round 6-7, it is important to go after a solid QB you can trust if your running QB has a tough matchup.  The QB to target is Eli Manning in Round 8-9.   With a healthy Hakeem Nicks and no consistent running game, Eli can put up low-end ELITE numbers.  If you miss on Eli, Josh Freeman will go very late and is going to be the Steal of your Draft.  ADP says 12th Round on Freeman.

This is the first season you can say there is some good depth at the RB position.  There are about 22 Running Backs you can almost count on every week.  After those 22 RBs, there are only about 12 more who can be considered RB #2 level, but mostly RB #3 quality. Outside of Montee Ball/Ryan Mathews/Ahmad Bradshaw, the other 19 RBs all usually go within the first three rounds.  The strategy here is obvious.

1st Round, you select a RB.  There is no doubting this rule.  If you go with a WR or a QB, and your 2nd Round RB gets injured.  You will be scrambling on the Waiver Wire all season just to hope you hit the right guy.  Since RB is the most scarce position year-after-year, it is important to be ROCK SOLID at it.

Unless Calvin Johnson falls to you in Round #2, there is no reason to look the other way and just grab the best RB on the board.  You can always find WR talent on the Waiver Wire, you can always draft Peyton Manning in Round 3 or get a great sleeper QB like Kaepernick in Round 7.  You should grab the RB to play it safe.  The key for all of your drafts, grab Montee Ball in Round 4 as your #3 RB.  If your league has a FLEX position, Ball will likely be one of the best FLEX players in your league.  Do not drop the Ball, Draft Ball.

After you draft Ball in Round #4 to be your #3 RB.  Look to grab Bradshaw later as he should have a solid season with that Colts offense.  Sleepers to target who could make ELITE RB #3 quality.

Remember, you take Montee Ball in Round 4.  You should go after Ahmad Bradshaw/Eddie Lacy/Rashard Mendenhall in Round 6.  Giovani Bernard does have the potential to be a game-changer.  If you see a value play on the board, and want to wait one more round for your RB#4.  Bernard is the guy to grab.   David Wilson/Lamar Miller/LE’Veon Bell go way too early.

Do yourself a favor and have 4 RBs you can trust this season.  Montee Ball being #3 RB will lead you to your championship.

HANDCUFFS.
Always draft your #1 RB handcuff.  The Golden Rule on when to draft is.
Arian Foster to Ben Tate after Round 8.  The rest can wait.
Tate can be instant Top 5 RB if Foster goes down.

If you are a V.I.P., then you are already covered at the WR position as that is my claim to fame.  I know what to look out for with WRs and that is why I was ranked #1 in-season for the WR position in 2012.

WRs will pop up on your waiver wire all season long, it is important not to draft this position high at all this season.

There are only two TEs this season who will dominate the game every week.

It is vital you take Rob Gronkowski in Round 4 of all Fantasy Football drafts this season.  His total points will likely classify him as a Top 10 WR when you compare his final numbers.  Tom Brady is going to throw to him every single week consistently.

But wait, isn’t that supposed to be the round you take Montee Ball??

Yes it is.  Which is why you grab Rob Gronkowski in Round #3 to secure the BEAST TE.

If you decide to wait on TE

Wait till the 8th Round to select Jared Cook.  He will be Sam Bradford’s main target this season.

Unless your team is completely filled out.  You have the ELITE backup RBs, you have the Speedy QB with a solid backup QB, you have 4 WRs you can play musical chairs with, you have the Kicker that goes with your QB.  Then it is time to draft your Defense.  D/ST is a position that will always have better options than your option on the Waiver Wire.  Since 85% of this position week-to-week is based on matchup, it is important to not rush this pick.  Even if it’s taking SF/SEA in Round 8-9.

You can still get 10 Points from your Waiver Wire Defense consistently if you make the right selections. 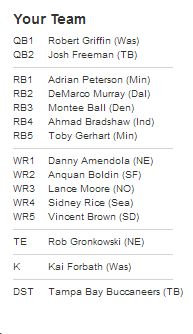