All the main positions are done, which means it is time for me to really sit down and come up with this years Fantasy Football strategy.  While many like to rush into what they want to do, I have broken everything down on multiple files which will help figure out the maximum team.  You will be surprised to see what I have in store for the Overall Draft Strategy.

Tonight we are going to analyze the TE position.  The TE position is one that is often forgotten in Fantasy Football.  Some teams like to pick up a new waiver wire player every week, while others consistently play disappointing big names like Vernon Davis/Antonio Gates.  The toughest teams in your league, are the teams that have the Superstars.

Usually in Fantasy Football, there are many BEASTS at each position, TE is a different story.  The industry is led by two players who define the word “BEAST.”  Rob Gronkowski is hands down the #1 option if he plays the entire season.  Word around the camp fire says there is a good chance he is fine for Week 1.  While many of you want Jimmy Graham who is part of a monsterous WR core, Rob Gronkowski is going to be the #1/#2 option for Brady.  Tell me with a straight face that you do not expect Gronk to get 12+ Targets a game.

The TEs in this Tier all once had their moment.  Tony Gonzalez used to be the best Fantasy TE in the game.  Jason Witten was one of the most consistent before the Patriot TEs arrived on the scene.  Vernon Davis used to be the most feared and would go in being drafted as a Top 5 Option.  JerMichael Finley has always had the potential to be a Tier 1 player.

The reason these players are Tier 2, is because of their consistency.  7 Points one week, 3 Points the next, 12 the week after that.  You will be riding a roller coaster with these options, but a steady one with little upside.

This Tier is going to leave you on the South Side of 10 Points more often than not.  All the options here can get you 50 Yards, or they can get you 50 Yards and 1 TD.  Jared Cook has the potential of this group to move to Tier 2, but consistency has always been his problem.  On St. Louis he will have more responsibility for Bradford.  Antonio Gates gets a small boost with the injury to Danario Alexander.  Martellus Bennett will have to be a RedZone Monster to save his season.  Greg Olsen, Brandon Myers and Owen Daniels both lack will not be seeing as many targets as you want to be overall consistent. 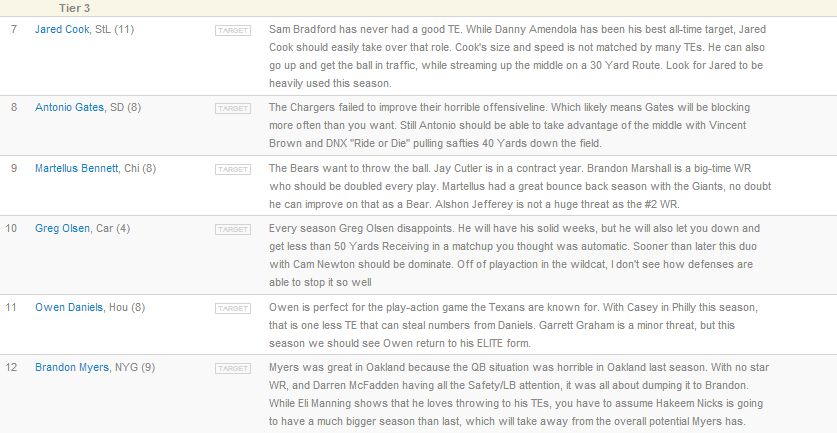 All of the players on this list make great backups, and shaky starters.  While there may be some controversy over my low-ranking on Kyle Rudolph, keep in mind his QB is Christian Ponder.  Keep in mind Christian Ponder fails to throw the ball over 20 Times consistently.  With the addition of Greg Jennings, Rudolph will be seeing less targets, which means those 6-8 he sees a game will have to count in the RedZone.  Jordan Cameron is the player who I liked consistently more than any every expert last season, maybe that is why me TE Ranking was so low.. Ben Watson is out of the picture now.  Brandon Pettigrew has to learn to catch the ball.  Brent Celek could be a huge sleeper with Maclin out for the year.  Dustin Keller finally has a legitimate QB.  Jake Ballard is the player everyone is sleeping on.  He was great with the Giants and Brady will definitely trust his big body over the middle when defenses double/triple Gronk.  Marcedes Lewis needs Chad Henne to win the QB job.  Fred Davis is healthy, but might take a year to become old Fred Davis after the Achilles injury.  Jermaine Gresham has been known to block a lot, but he is more athletic than most of the TEs in this league. 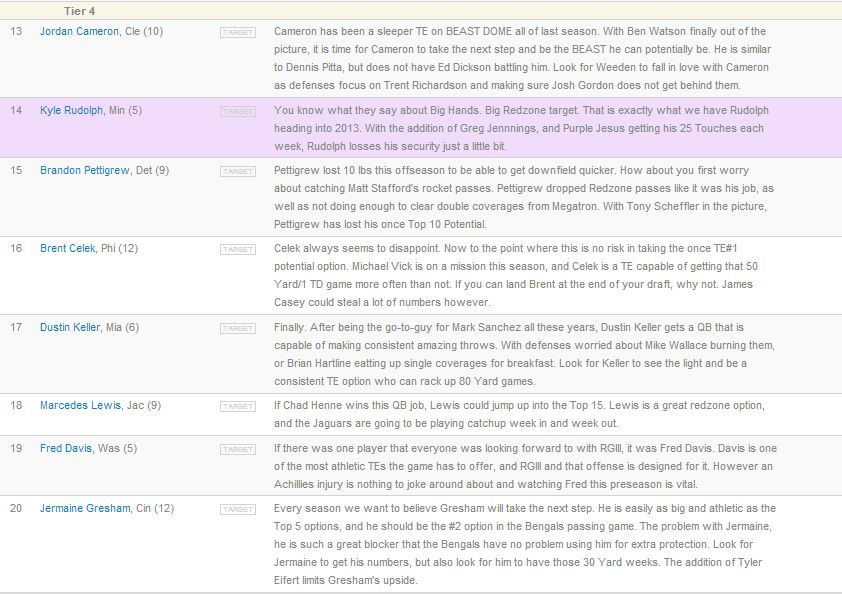 If you are using a TE from this section, you are obviously in a very deep league that requires multiple TEs.  None of these guys should be touched with a pole unless you are trying to play Roulette with your TE spot.  You will either get that 6 Yard TD from most of these guys, or less than 40 Yards.  Either way, you are looking at a headache with all of these players.  Heath Miller could emerge from this list, but he is only getting older somebody should of told him last seasons, that he was on one.

All of these players from Tyler Eifert to Zach Sudfeld all have some sort of potential this season.  While there is potential for some solid numbers, there is more potential to be an average option.  The TE position is dominated by two Players, these players do not come close to touching those players.  This group is the pure luck backup that turns into a good Plug-N-Play option. 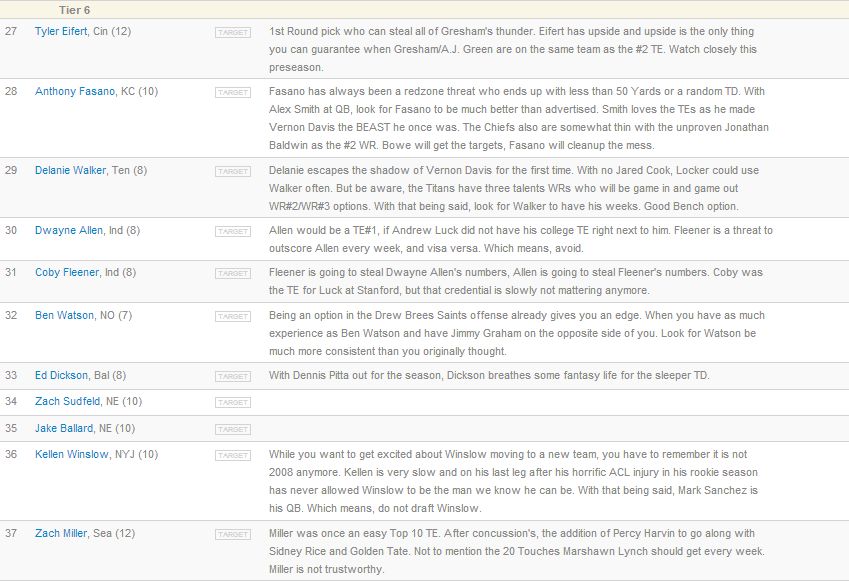 This TE group is for the extremely desperate.  Hoomanawanui, a name you will never get comfortable saying unless he scores a TD for you.  Is the only player you could consider to have a shot at making a Fantasy squad this season.  The others will all be there if the sky falls down and injuries occur.  No reason to go down this list.