Follow me in the DraftStreet Championship tomorrow as I fight and claw my way into the 2nd Round of the Tournament.  After the first night of action, I find myself in 13th Place.  Top 12 Advance after tomorrow.  I will be sending a bill to James Shields after pitching the worst performance I have gotten out of an Ace all-season.  Big Game James is now known as Big Game Bust after that performance.

Tonight we are going to analyze the WR position.   The WR Position is what put BEAST DOME on the board in the Fantasy Football Industry of 2012.  In my first year on the FantasyPros Expert Circut I was able to pull the down the overall #1 WR in-season Rankings.  WR to some is the most unpredictable position, I have my theories that I keep to myself. 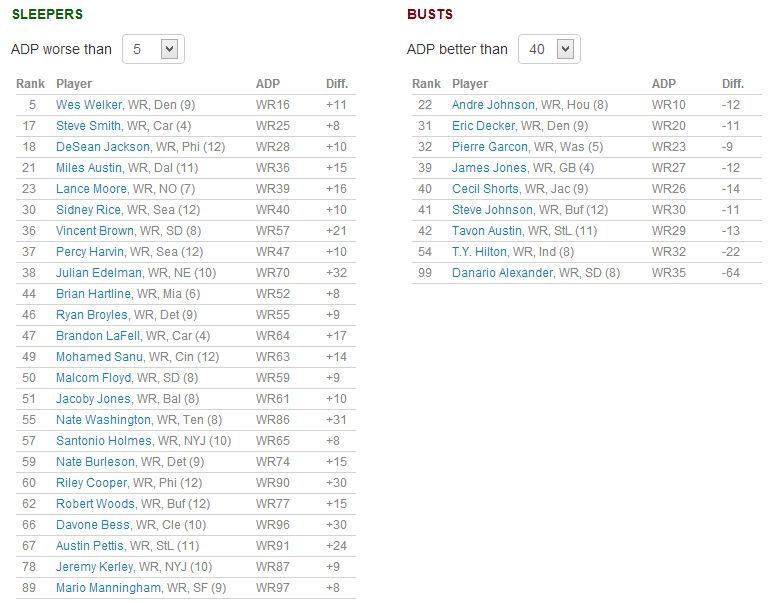 Every single week of the season, Brandon Marshall and Calvin Johnson will be rotating that #1 WR spot.  While that is exaggerating a little bit, it is pretty close to true.  Both of these WRs will make up more than 60% of the teams total receiving yards.  Both WRs have great QBs who are not shy in throwing them the ball consistently.

This is a great group of WRs below.  The only reason they are not in the Top Tier, is because they share responsibilities with someone else.  Everyone except Larry Fitzgerald and A.J. Green.  If Giovani Bernard is the starting RB, A.J. Green can get a Boost to Tier #1 as the Bengals offense would have constant excitement.  Teams don’t have any reason to not double team him every snap.  Larry Fitzgerald on the other hand finally has a QB, which should lead to a breakout season.  Breakout meaning, first dominant season since Kurt Warner left.  Will age be a factor?  Likely not as he keeps himself in better shape than any player.

I have Wes Welker ranked higher than every Fantasy Football Website.  I think they are all BLIND if they do not see the potential Wes Welker has in a Peyton Manning offense.  Peyton Manning made Brandon Stokley look good, imagine what he can do with Wes.  Welker also does not have to deal with big TEs in Gronk/Hernandez anymore, which is huge for a player that runs more quick routes than deep routes.  HUGE season coming for Welker, one where he could have over 1,600 Yards easily. 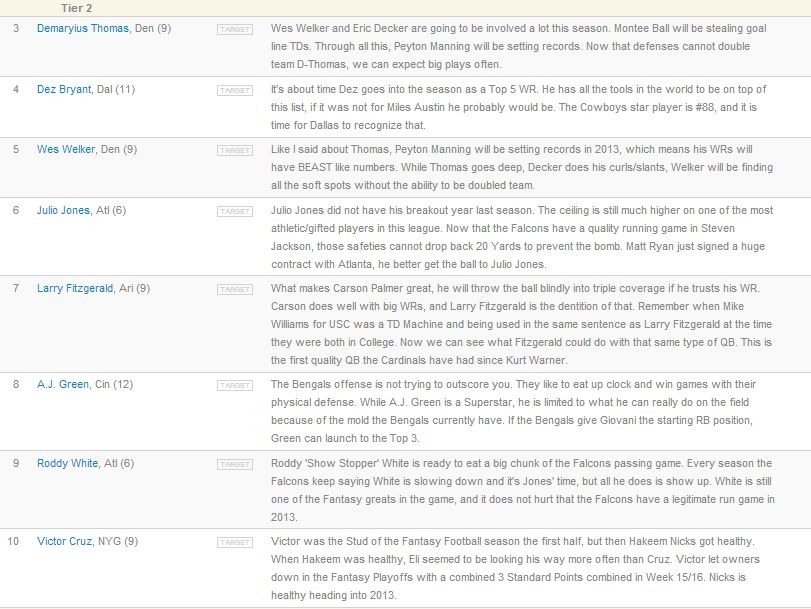 Drafting any of these WRs should give you WR#1 numbers fairly consistently.  Some of these players can even break into the Top 10 without breaking a sweat.  Danny Amendola will be the go-to-guy whenever Gronk is out, and that situation is looking worse by the week.  Vincent Jackson will get plenty of deep balls from Josh Freeman who is in a contract year.  Hakeem Nicks is reportedly 100% healthy, Eli Manning throws to him more than Cruz.  I wish I was making that statistic up, but it is the truth when you watch Giant games.  Jordy Nelson should be fine this season, could even play Week 1.  Randall Cobb is the healthier, less injury risk, WR which pushes him above Nelson on the list.   Colston still has Drew Brees.  Steve Smith is the only thing Cam Newton can trust in the passing game.  Steve could easily have a breakout year and is a MUST-TARGET player this season.  Desean Jackson has the WR situation to himself with Jeremy Maclin out for the year.  Desean has to step up in this situation, and he is being drafted low-enough where he is worth the risk.

Mike Wallace and Dwayne Bowe are both clear #1 WRs on their teams, I think both QBs are able to get their Superstars the ball.  In the mean time, Miles Austin is the Sleeper of the Year as he is the best open field WR in the NFL.  Dallas knows this and they will exploit it.

Andre Johnson is a BUST in my eyes as he is only getting older, and the team does not throw enough as is.  Add in the fact this team took Hopkins in Round #1 to play the opposite WR, and we could be seeing the last great Fantasy season of Andre.  This preseason will show a lot. 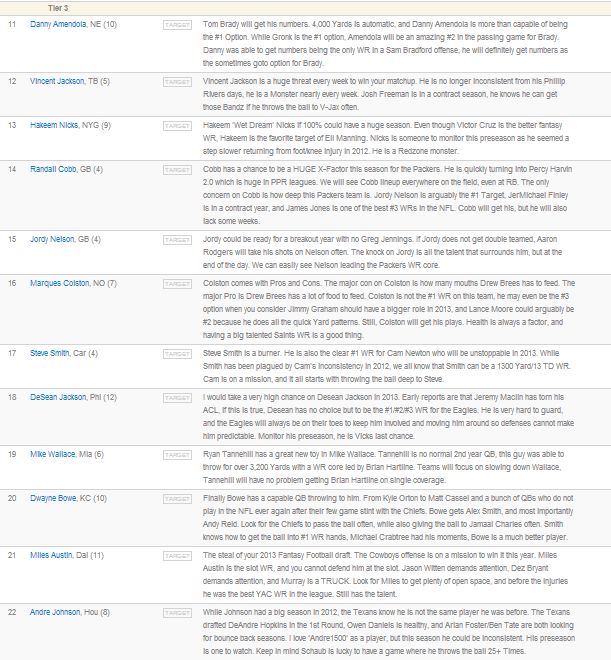 All of these players can play like WR #2 quality for Fantasy Football, maybe even WR #1.  If you can grab these guys as your #3 WR, you will be in a very comfortable position this Fantasy Football season.

All of these players should deliver 8 Points consistently in standard leagues.  Everyone from Lance Moore being the go-to-slot guy for Brees.  Greg Jennings being the only option for “The Horrible Wonderful Christian Ponder.”  Torrey Smith now going to see constant double-teams.  Antonio Brown will be a solid go-to player for Big Ben who has a plethora of options to throw to.  Mike Williams will make the TDs Dance for Freeman as he enters a contract year.  Anquan Boldin will likely be a steal with Colin Kaepernick.  Sidney Rice is back to being the go-to-guy with Seattle.  He looked great doing it last season, just not very explosive at times.  Eric Decker will be sharing Targets with too many studs, some weeks forgotten.  Pierre Garcon has a lot of competition for Targets, while he should remain #1, his consistency may not come like it did last season when healthy.  Britt is in a contract year and ready to earn some money, will Jake Locker make it possible? 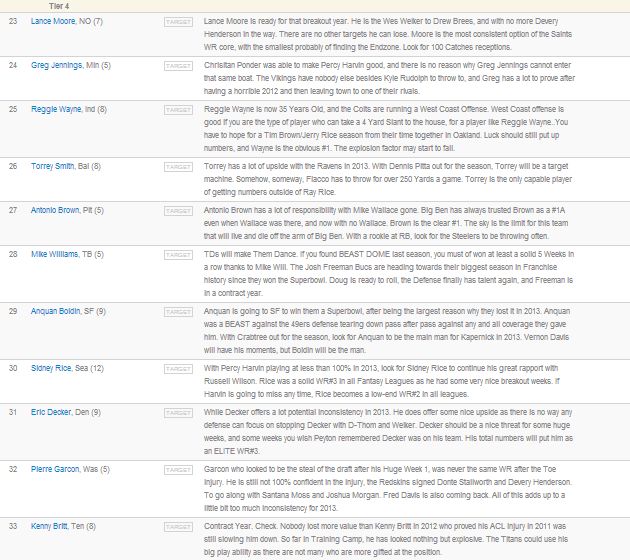 These players have breakout potential.  The type of potential where one catch can make up their whole day.  Players like Denarius Moore/Josh Gordon/Vincent Brown are the type who can catch a 76 Yard TD.  Julian Edelman/James Jones can catch a Redzone TD.  Percy Harvin has the chance to be a Playoff MVP as he will be healthy just in time.  BEAST player to stash on your bench as the Seahawks get him ready for a Superbowl run.  Cecil Shorts and Justin Blackmon need Chad Henne to be the QB.  Early reports out of camp say, Tavon Austin may not be getting enough action as a rookie.   Golden Tate will have some solid weeks, and some horrible ones.  Stevie Johnson needs a QB, while Brian Hartline will see single coverage every play.  Something he tears apart when it is a bad matchup.

These WRs will likely have as many Bad weeks as they have amazing. 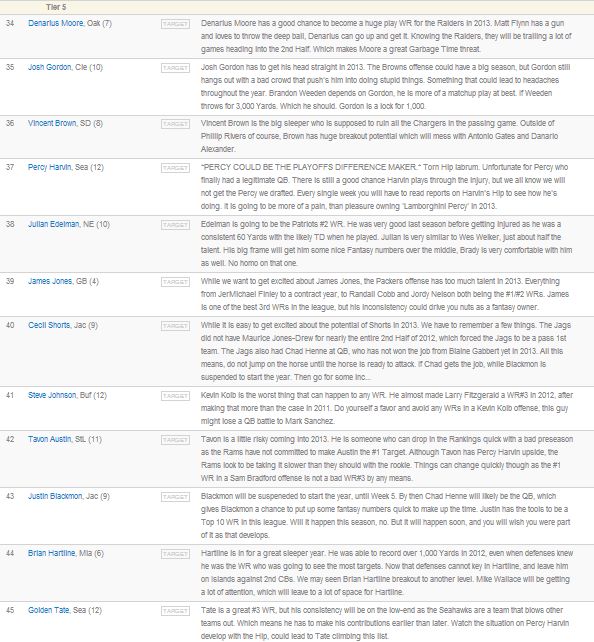 The WRs on this list will not be options to play consistently.  Maybe once a month if they are lucky.  The WRs on this list are players that will have a good matchup, and you will want to roll the dice on them.  They will also have weeks where they fail to record 40+ Yards, three weeks in a row.

WRs like Ryan Broyles could lose snaps to Nate Burelson.  Brandon LaFell does not get enough targets, Panthers passing game will likely remain on the ground.  Jeffery has potential, but now has Martellus Bennett joining the party.  Malcolm Floyd can be interesting now that Danario Alexander is out for the season.

All of these players have a level of talent, the opportunities to be a consistent Fantasy Option are not there yet. 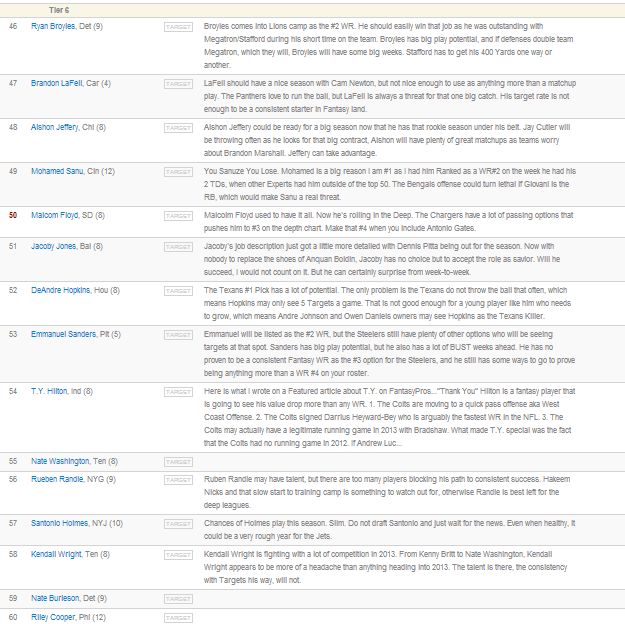 All of these players will have their moments.  Before you get too comfortable with any of them, they will flop on you.  Which likely means you will recycle them on the wire.  Robert Woods could be special if he had a legitimate QB.  All of those Arizona WRs could lose snaps to Patrick Peterson.  Aaron Dobson will try to beat Edelman.  Rookies usually never win with Belichick.  Harry Douglas would be a WR #2 if anything happens to Roddy White/Julio Jones. 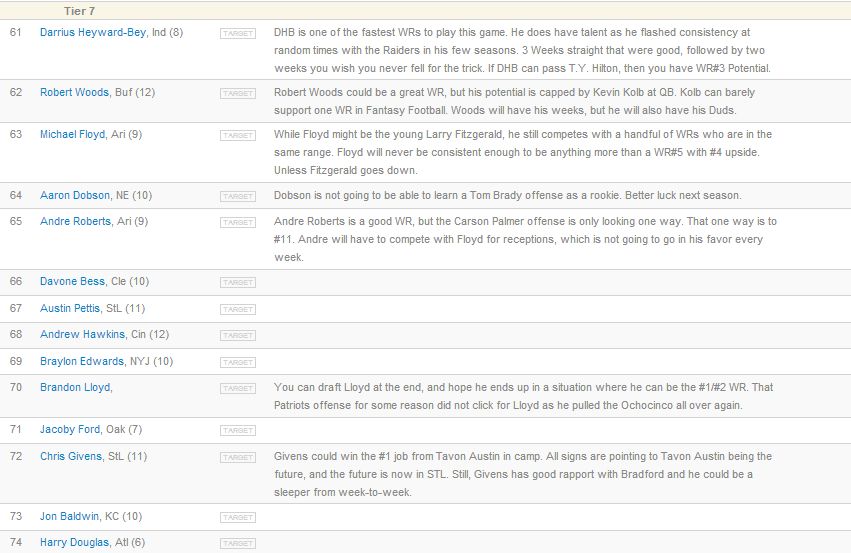 These are WRs that should never see the light of day on your fantasy roster.  While it is possible players get injured and things change, there is no reason to go into your draft thinking about Jerricho Cotchery, Plaxico Burress or Santana Moss.  This is not 2008. 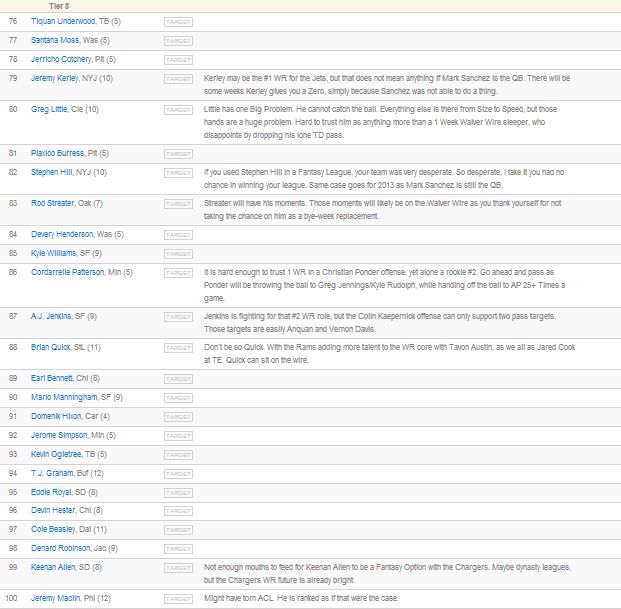