We are approaching draft day for many of you.  While you are all anxious for the moment, it is important to scout the Preseason games to watch your players in action.  Luckily for all of you, I will be your eyes and Fantasy Voice.

Tonight we are going to analyze the RB position.   If you do not have strong RBs, you are in for a rough season.  If you face a team who is getting a combined 40 Points with their RBs, and you can barely string together 20 if you are lucky, there is no chance you win your matchup.  RB is also the hardest position to find on the Waiver Wire, which means it is good to stack up on these guys and get 4 Great quality RBs.  You never know what’s going to happen with the health of these players, the NFL is a vicious game.

Adrian Peterson is that dominant.  He gets his own Tier as he can consistently be the #1 RB week-after-week no matter the matchup.  If he runs for over 150 Yards in Week 1 against the Lions (which he should), then you can lick your chops as you are in for a season to remember.

While this group is not Adrian Peterson good, they still can outperform the Vikings RB every now and then.  All of these players are Top 5 RBs consistently week-after-week.  Drafting any of these RBs is a great way to start your 2013 Fantasy Football season.  100 Yards/1 TD should be the norm of this group, at least.

TIER 3 – BEAUTY AND THE BEAST

All of these RBs are going to give you rock solid weeks very consistently.  The reason these are not Tier 2 RBs is because of they each have a concern heading into the season.

McCoy has Bryce Brown as well as an inconsistent offense to work with.  Trent Richardson is on the Browns, too many blowouts.  Ray Rice has to deal with Bernard Pierce as well as more defensive attention with no Boldin/Pitta.  Steven Jackson is on a pass 1st/pass 2nd team.  Darren McFadden is a Raider, too many blowouts as well as being injury prone.  Alfred Morris is a Rock, just not very explosive.  DeMarco Murray is injury prone, the Cowboys do tend to fall in love with the pass even though they “say” they want to run the ball more.  Montee Ball will be moved up to #5 ahead of Jamaal Charles come my final Rankings, just don’t want to tip him off to the FantasyPros Experts.  Montee is in a class of his own and should dominate like a BEAST being in this Broncos offense.  Maurice Jones-Drew could be in for a bad season if Blaine Gabbertt is his QB.  C.J. Spiller has Fred Jackson as well as a horrible offense with Kevin Kolb. 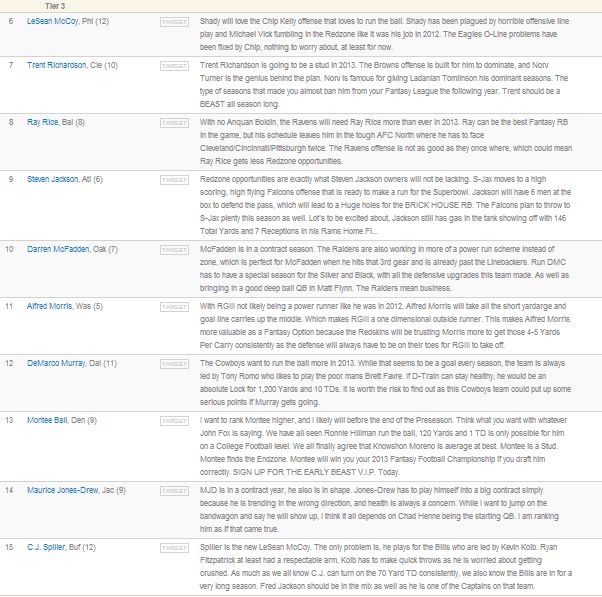 TIER 4 – BEAUTY AND THE BUST

If you do not have  RB#2 by the time you get to Tier 4.  You have to draft two of these guys as this is the platoon group.  All of these players can put up HUGE numbers one week, and average numbers the next.

CJ2K is about as BEAST or BUST as it gets.  Ridley has to deal with Vereen and the inconsistent mind of Bill Belichick.  Frank Gore does not catch the ball, how many more 250+ carry seasons can he take?  Matt Forte loses goal-line touches to Michael Bush.  Reggie Bush loses goal line touches to Mikel Leshoure.  Ryan Mathews is as fragile as it gets at RB, the offensive line has problems as well.  Ahmad Bradshaw never stays healthy, Vick Ballard is a semi-threat. 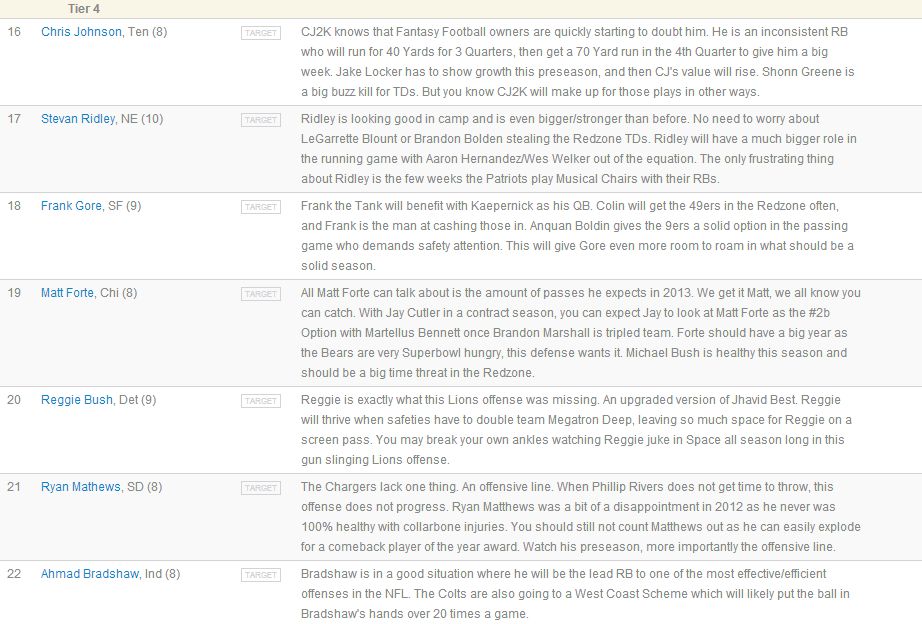 This is the group where you should have your #4 and or #5 RB come draft day.  While they all have upside, they all have something to worry about.

Eddie Lacy has every chance to succeed with that high scoring Packers offense.  Le’Veon Bell has the chance to be the everydown RB for the Steelers.  David Wilson loses touches to Andre Brown, can he even stay healthy a full season?  Rashard Mendenhall looked a step slower last season, the Cardinals offense may not be that great.  Lamar Miller is prone to mistakes, can he even stay healthy all season. 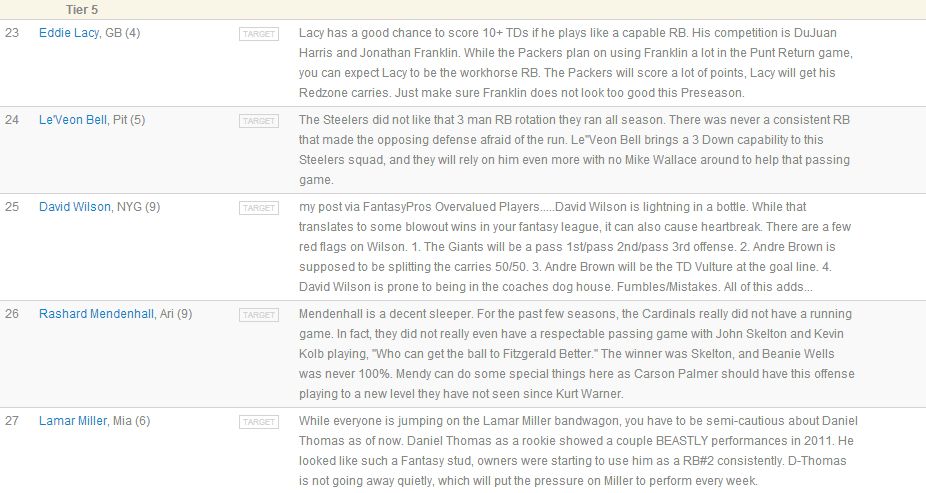 TIER 6A – Depth with Upside

All of these players have potential, but all of them also have plenty of single digit scoring weeks in their future.  Most of these players are handcuffs that are playable such as Ben Tate/Andre Brown, but Giovani Bernard is the player who can really emerge from this group.  His overall skill is exactly what the Bengals offense is missing. 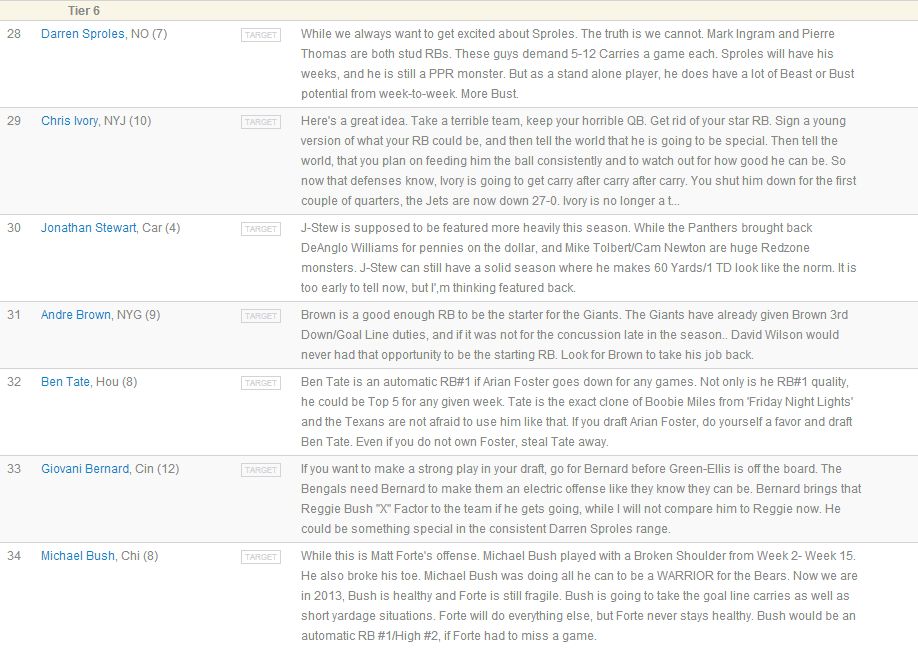 TIER 6B – Depth with Downside

This group is the opposite of Tier 6A.  While Tier 6A players have more potential, Tier 6B are the players who can start out the season with better numbers than their counterpart.  Such as Benjarvus Green-Ellis, while others like Vereen and Vick Ballard may never get enough consistent touches. 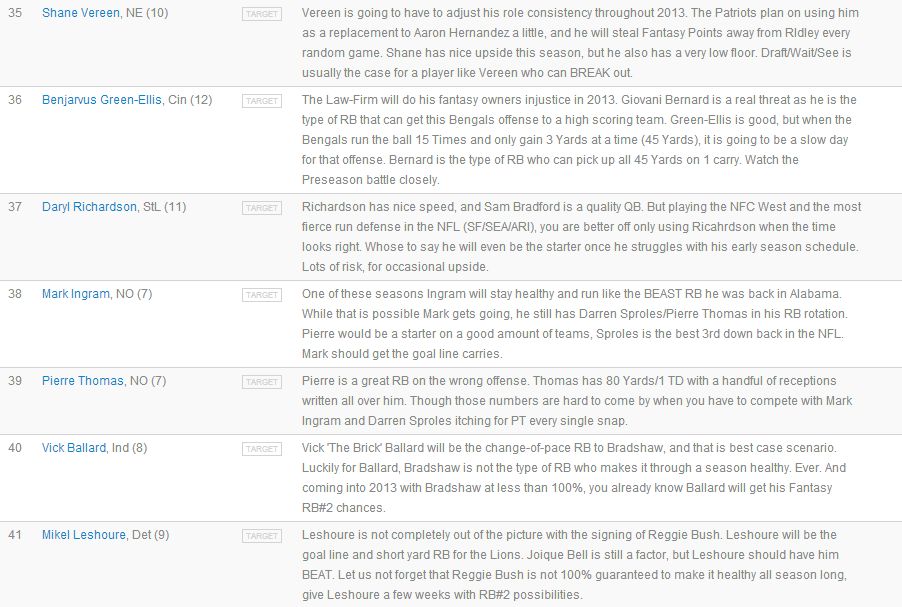 Strict Handcuff players, or deep league options who could perform like studs if players get injured.  Most of these RBs should remain on your Waiver Wire, but lookout for Jonathan Franklin to be the potential HUGE sleeper of this group.  Eddie Lacey is no lock to keep the job all season, he is also no lock to stay healthy.  Jonathan Franklin is a poor-mans Maurice Jones-Drew.  Watch out for that game changing potential. 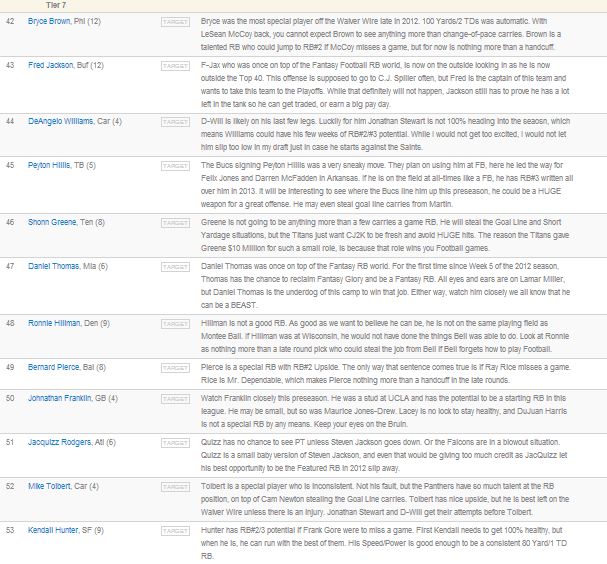 More handcuffs, and more Waiver Wire options to play with.  The player of this group that must be drafted is Toby Gerhart.  Even though Toby is a RB#3 at best if Adrian Peterson goes down, you still want to have his backup since you will never be benching him (unless Bye week).  Having Toby saves you the grief of the what could be, all the other players need a few injuries to happen.  If you own Marshawn Lynch, grab Robert Turbin. 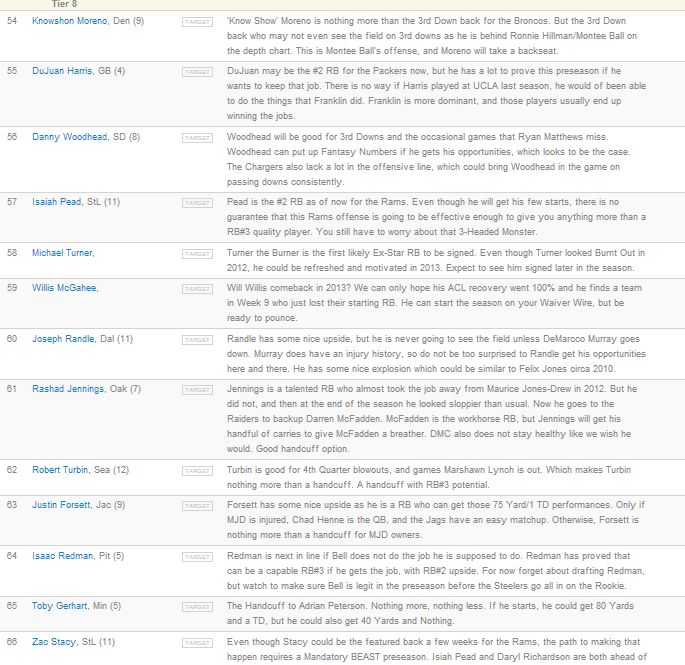 Waiver Wire.  There is no reason any of these players should be on your draft day roster. 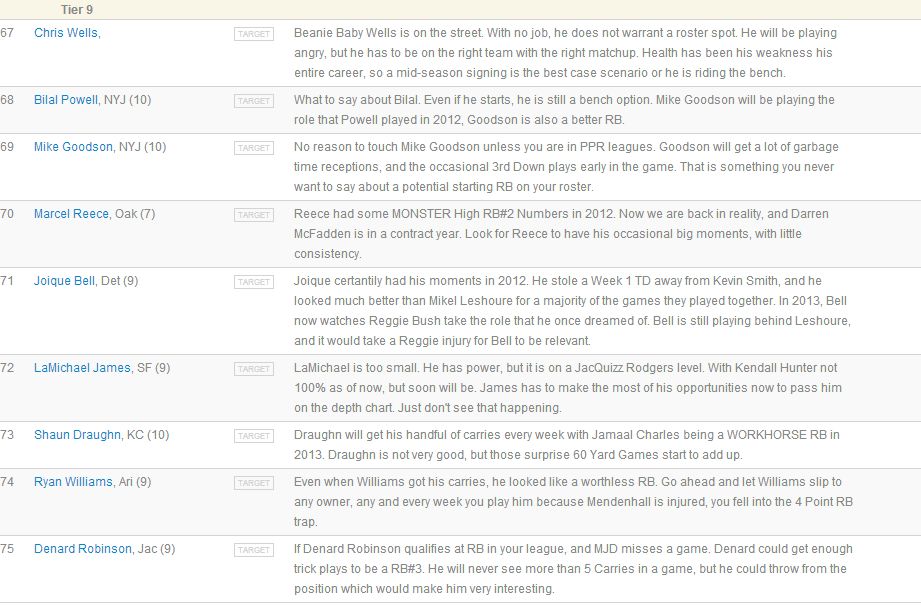