This article is a short preview of what V.I.P.s see in the official Extended Cheat Sheet/Strategy Guide.  It’s going to be a season to remember here on BEAST DOME in the Fantasy Football world.  Signing up to be a V.I.P. will bring you into a whole new world of Fantasy Football.

Coming Up This Weekend In The Dome

Had to give a shout out to Muntra!! Beast all of last season. I jump quickly on the special early beast VIP package! Do yourself a favor and go ahead and get it or else you will kick yourself later in the season. With the help of Muntra I went from 0-2 first 2 weeks to 9-4 end of the season and brought home the Championship first time playing Fantasy Football last year! With his insider knowledge and tips you too can bring home the bragging rights and $$$. As long as I play FF then I will always need Muntra to guide the way. Thanks bro!!
LV – Swat-A-Nut

There are 7/8 QBs that are taken in the first 4 Rounds of Fantasy Football Drafts this season.

Andrew Luck is the *Variable #8* (He goes Round 4/5)  Let that owner have him in the very unexciting West Coast Offense.  He will be very similar to the QB he was at Stanford.  That will not translate to HUGE Fantasy Numbers.

QBS LEFT THAT YOU CAN COUNT ON

So now there are 4 Teams that need QBs.

1. Colin Kaepernick – He’s going to be dangerous this season.  Could finish with Cam Newton.

2. Russell Wilson – The loss of Percy Harvin hurts what could of been.

3. RGIII – Looking good, still not a believer in his passing numbers.  Can still win you a week by himself.

4. Eli Manning – Could easily throw for as many yards as the QBs like Ryan/Brady/Stafford.
*Does blow big games consistently*

6. Tony Romo – Maybe this will be the season.  Either way, you can grab him as the #13 QB off the board.  Once it is only him and Eli Manning left, as soon as Eli is taken, go after Romo.

You already know you can get Josh Freeman Late.  If you are selecting a QB from this list. JOSH FREEMAN IS MUST-OWN.

If you are one of those 4 Teams that needs one of these QBs.  The strategy is simple.

Go ahead and take a Gamble on Colin Kapernick being the Man.  He can jump to Tier 2.

Now there are 3 Teams that need a QB

Then once someone takes Russell Wilson.

It is time to jump on the RGIII ship.  RGIII can single handily win you weeks.

Now there is only 1 Teams that need a QB

3.  So now Kaepernick/Wilson/RGIII are gone.  The WRs on that list above are gone.  Only 1 More Teams need a QB, Eli Manning and Tony Romo are left.

The difference in my simulated scoring between the two is 15 Points.

You can keep building depth until someone takes Eli Manning.  But once Eli is gone, it is time to stop playing Chicken.

Grab Tony Romo Stands with your next pick.

Do not wait too Long.  Round 9 is the latest you should grab your QB.  By then, you should have.

As long as nobody in your draft room knows about BEASTDOME.com, you will be able to get Josh Freeman a few rounds later and all is saved.

OTHER TOP BACKUP QBS TO SHUFFLE WITH

Jay Cutler and Michael Vick can sneak into Tier 3 above.  The other QBs, I would not draft unless I was going after a Bye Week Replacement.  Josh Freeman should be drafted above all the Players on this list.  The number next to the player signifies their current Ranking at the QB position.

These are the QBs to target if you have any of the following Starting QBs.  If you do not have any of these players in a 12 Team League, your backup QB has to be Josh Freeman.  Freeman will be outscoring Eli/Romo multiple times this season.  He will outscore Kapernick/Wilson/RGIII a few times as well.

Jay Cutler would be the most ideal Bye-Week Replacement.  Chicago @ GB (Week 9)

Philip Rivers is the player you can draft late. San Diego @ Washington (Week 9)

Ryan Tannehill is the player you can grab at the end of your draft.  Miami @ New Orleans (Week 4)

Jay Cutler is the backup to spend a high pick on. Chicago @ Det (Week 4)

Andy Dalton has a juicy matchup in a dome. Cincy @ Detroit (Week 7)

Philip Rivers can throw us back to 2009. San Diego @ Jacksonville (Week 7)

Brandon Weeden you do not even have to draft as the Browns play from Behind.  Cleveland @ GB (Week 7)

Joe Flacco should get his passing yards against a soft Packers defense. Baltimore @ GB (Week 6)

Brandon Weeden can be snagged at the end of your draft. Cleveland vs. Detroit (Week 6)

Assuming he still has the job.  Michael Vick has a vintage matchup against the Packers.  PHI @ GB (Week 10)

Matt Schaub takes on the Jaguars.  A team he always tears apart.  Houston vs. Jacksonville (Week 12)

Sam Bradford will not be a playable option many times, but this is one.  STL vs. Jacksonville (Week 5)

Christian Ponder is Home on Sunday Night Football with a good match up.  Minnesota vs. GB (Week 8)
*Make sure you follow QB/K on that one to win the week*

MOCK DRAFT OF THE DAY 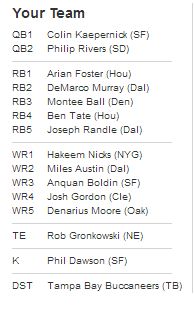