First of all, thank you. Thank you for continuing to believe despite what FantasyPros Ranks me week in and week out. The purpose of this article is to prove to you that not only was BEAST DOME the #1 Fantasy Football Site in 2014 with Pre-Draft Rankings, but no site came even close. There is a reason BEAST DOME is the most expensive Preseason Package than any Fantasy Football Advice site, and there is a reason why the BEAST VIP NATION has returning clients every single season. I will go position by position. Before we start, here is all of the All-BEAST DOME TEAMS of 2014 with Top 5 BEAST CALLS.

Below you will see I was higher on 3/5 players that made this Expert win, BEST DRAFT GUIDE aka Most Accurate Preseason Advice. I do not even consider these 3 Players as my 3 BEST PREDICTIONS of the 2014 season. 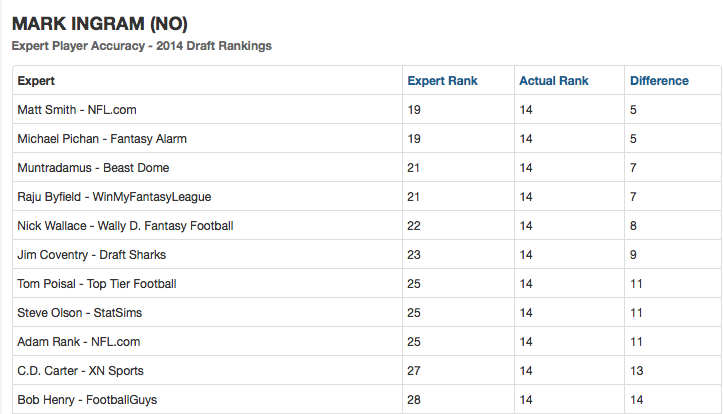 NO Steve Smith Sr. even though that was one of the few good picks by the guy who won?

Regardless, Jeremy Maclin/Mike Evans/Golden Tate. All three of these players were heavily promoted in the BEAST preseason Package for 2014. I was the only Expert to rank all three of these WR options in the 99.99%tile, when you add Steve Smith Sr. I am in a class of my own. You can see the evidence below.

My WR Bust Collection was so great, I did not even consider Keenan Allen as one of my top WR Busts of 2014. Not mentioned is Michael Crabtree/Michael Floyd who I had way below the field who had an ECR higher than both Welker (Concussion during Preseason, everyone dropped him) and Percy Harvin (Traded, then BUST). Regardless the pick of Cordarrelle Patterson as a BUST stands out by itself. No player was drafted so high at the WR position that became an instant Waiver Wire Player so quickly in the history of Fantasy Football. Jamey Eisenberg, “The Next Josh Gordon.”

Regardless of being the only Expert to call the most BEAST picks at WR, as well as the most AVOID picks at WR. Here is how FantasyPros Ranked me for my Draft Guide.

All of them Ranked Cord Patterson as a Top 20 WR.

All the Rest Were High on all the BUST Picks

No Mention of Arian Foster or Marshawn Lynch who both fell to 2nd Round? No Mark Ingram either?

The two mentions below are excuse me mentions. Aka the expert just had them highest without any intent of saying he is a MUST-DRAFT.

Justin Forsett was not even Ranked as someone to draft. But when Ray Rice did his elevator thing (BEAST DOME RANKED RAY RICE HIGHEST 2014). I told everyone to add Justin Forsett the first day. In Fact only your Top 50 RBs you Rank count, so not sure why he even was included.

C.J. Anderson, not even ranked as someone to target. The second Montee got injured and everyone rushed for Ronnie Hillman. I told everyone to add C.J. Anderson. 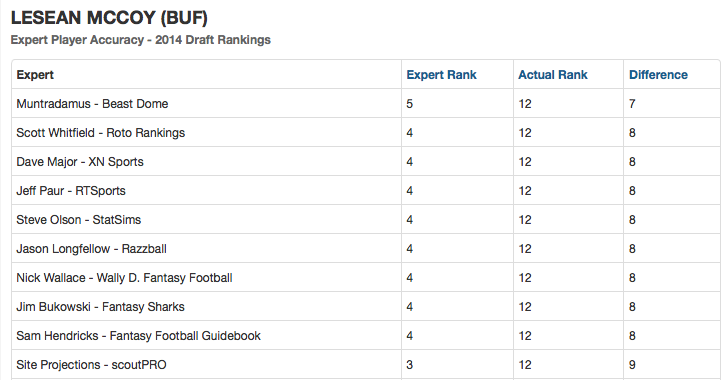 The real call was Toby Gerhart. Every Expert Ranked him Top 20 as a great steal in the 2nd/3rd Round. If you drafted Toby Gerhart, chances are the people in your league will never let that down. Better chance is that everyone expected him to do well to begin with as other owners in your league follow the sheep.

I was also able to dig up this list. 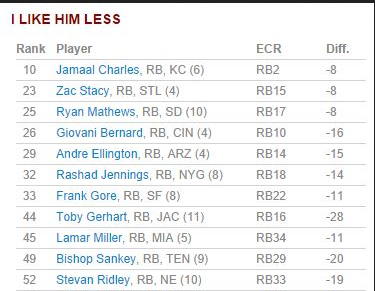 Only RB I was wrong on from this list is Lamar Miller who got a nice path paved for him when Knowshon Moreno got injured in Week 2. 10/11 Correct.

Also note I was the only Expert who Ranked Arian Foster/Marshawn Lynch as my Top 2 RBs. Those two both finished Top 5. While Charles and McCoy finished bottom 5. Easily the difference in winning/losing your league.

That’s the only pick they can come up with? No love for Joe Flacco who was the RGIII Savior who I ranked Top 12 and ended up outperforming QBs like Matt Stafford?

No Cam Newton, another great Avoid Call by myself. Regardless, I listed Nick Foles as a BUST and had him at the 99.99%tile. Of Course RGIII was a BUST, of course he got injured. But how can you take another cheap shot on an injured player instead of Cam Newton who had less excuses (14 Games) and a higher rank ECR #10 to not finish on course while RGIII (ECR was #13) missed nearly the entire season after getting injured in Week 2 and was never the same as he was playing on one leg when he came back.

I did not expect a high QB Rating this year because of RGIII, but nearly dead last again?

Only Expert to Rank a WR Cast of (Jeremy Maclin/Golden Tate/Mike Evans/Steve Smith Sr) in the Top 99.99%tile.

Only Expert to Rank Arian Foster/Marshawn Lynch/Mark Ingram in the Top 99.99%tile.

Only Expert to Rank both the BUST of the year at RB (Toby Gerhart) & WR (Cord Patterson) by a HUGE margin.

Only Expert to have more correct AVOID Picks at RB/WR than any Expert by a long shot when looking at Top 99.99%tile.

Yet I finish near Dead Last.

They both ranked Arian Foster in double digit range at RB & Marshawn Lynch #7.

Yet I finish near Dead Last.

Feel free to debate. I will approve/respond to all comments as long as you respond with maturity.