We are going to turn back the clock all through the weekend with Throw BACK BEAST WEEK.

Finding Sleeper WRs is what I do year in and year out. When I claimed James Jones to be a Sleeper WR, everyone thought I was nuts. 890 Yards/8 TD later, that is a way to end a career.

This article above should show you how BEAST I can be when predicting the outlook of an NFL Season. Not only was the Super Bowl prediction correct from Day 1, but just about all the analysis all season long continues to show why BEAST DOME is the only Fantasy Football Site you need to depend on.

Let us not forget the Record Season by MVP Peyton Manning that nobody predicted besides myself. 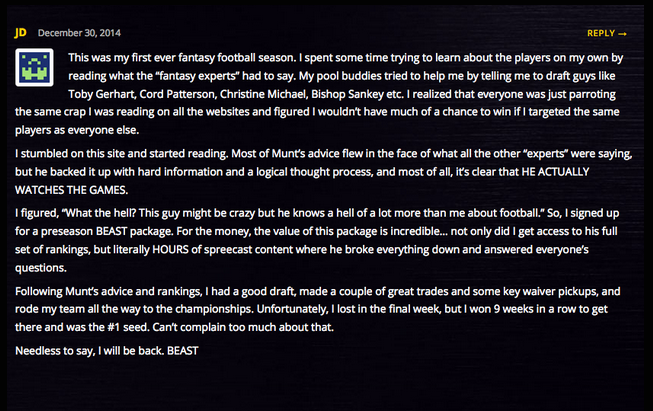 Jamaal Charles was the Sheep Cover man for so many years as the #1 RB. Last season they passed the torch to Todd Gurley who was as SHEEP as it gets.

This year the #1 ECR RB is David Johnson, and of course David Johnson is going to finish in the Top Class. But is he really #1?

This is an article that is a Must-READ for all BEAST DOME users. If you take the time to check BEAST DOME even without being a MVP, I want you to know how vital it is to draft the QB/K Combo. I almost guarantee you, you will lose multiple games in your regular season and potentially your Playoffs, because you did not follow the QB/K Combo Strategy. 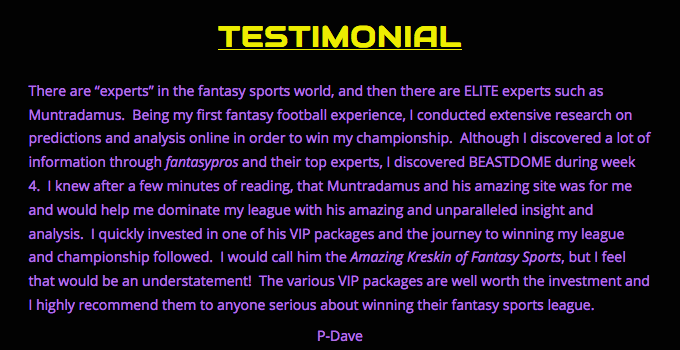 BEFORE I WAS MUNTRADAMUS 5 YEARS AGO

THEN I BECAME MUNTRADAMUS

COMING DAY & NIGHT THROUGHOUT THE WEEKEND