I GOT THE WAIVER WIRE GOING UP. ON A TUESDAY

Week 1 in the books. We learned a lot during the first week of the NFL action, there were a lot of injuries, but the VIPs prevailed. 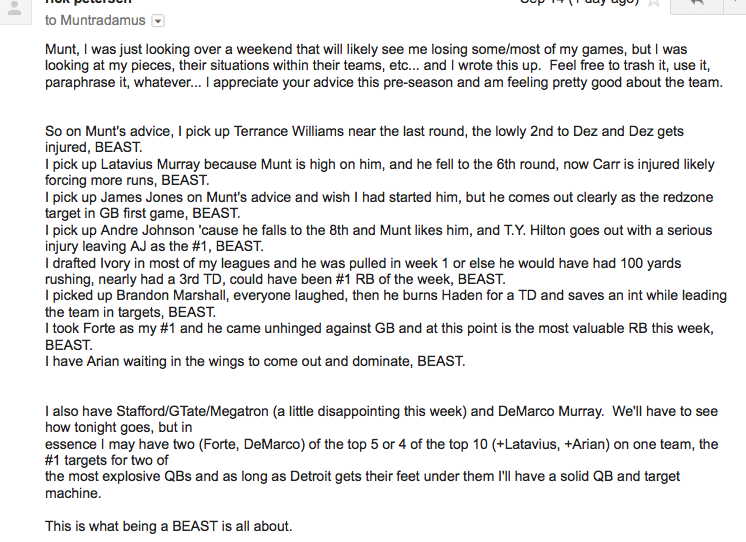 MUNTRADAMUS RANT OF THE WEEK

The Seahawks had the ball inside the Rams 10, 8 plays on Sunday. Do you know how many carries Marshawn Lynch had inside the 10 yard line? 1!

What the *** is Pete Carroll thinking not giving the ball to his BEAST. Most important, what the ***?! is this Shotgun QB Option Draw every single play. Even on 4th and 1 for the very last play of the game, they run the stupid Shotgun QB Option Draw. If you have ever seen me call a Live BEASTcast TV game with Pete Carroll and the Seahawks, you know I believe Pete is absolute garbage. Just lineup in the I-Formation, and run a plunge with Marshawn Lynch. It is nearly automatic every single time.

With that being said, Marshawn still looks like a BEAST on the field and it was encouraging to see the Seahawks run 79 plays on Sunday as oppose to 63.5 on average last year. Seahawks are going to be fine as a team, and the rest of the NFC West has no chance in taking a playoff spot away from them. Unless Hyde & GO BEAST turns into the next Adrian Peterson.

BUST OF THE WEEK RECAP

Haters going to Hate. Despite Jamaal Charles ending with a rock solid 16 Points in Standard Leagues, the journey to that 16 was a tricky one. Having less than 10 Yards Rushing in the first half, and a gift TD thanks to a Brian Hoyer fumble inside Houston’s own 10 yard line. Jamaal Charles was able to churn out three nice runs in the 2nd half between 11-16 yards which made up for all of his no gain carries. He finished with 57 on the ground which is hardly enough to be excited about. Was I wrong, statistically yes, but as far as what I expected, no. 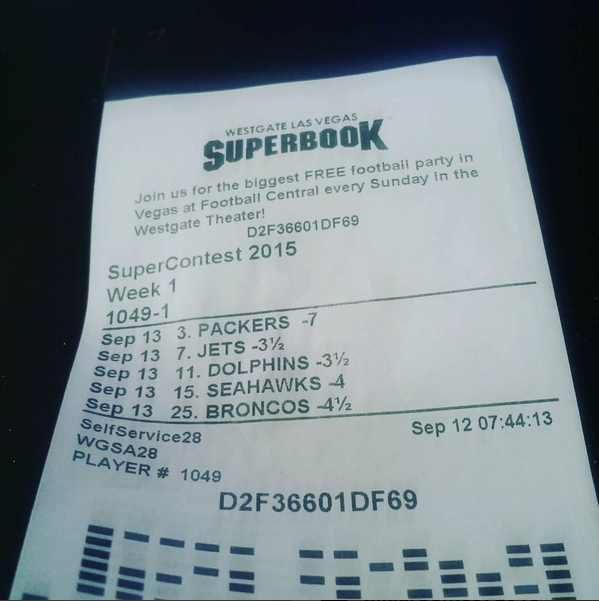 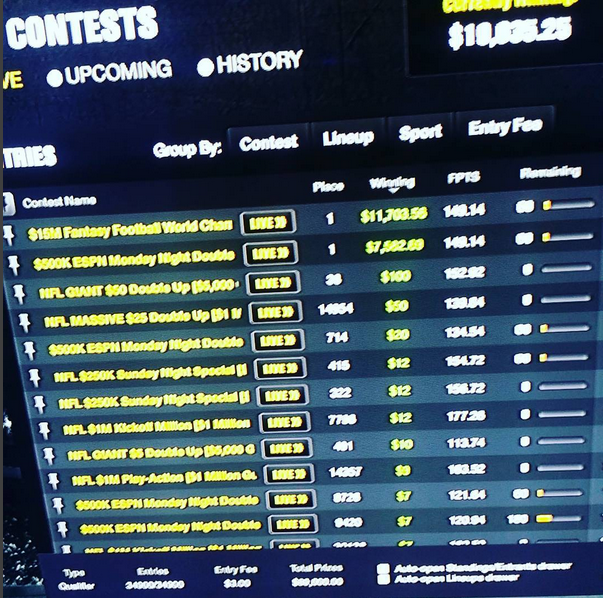 Was sitting pretty before the last game of the night between MIN @ SF. Hyde & Go BEAST ended up hitting me back in the face in the end, but it was still a good momentum builder for me to see and something to strive for as we hit Week 2. First week of BEASTHEDGE.com will be open this week, more on Daily Fantasy Packages tomorrow.

It obviously pays to be a VIP as many of the Free Agent options I love will either be taken right away from your league, or were already drafted. You would of overpaid for them on Draft Day had you followed the strategy.

I was all over T-Will since June when I did my first rankings holding him inside the Top 30. He was drafted on just about every VIP’s league as no Expert had him ranked higher than myself, and he was a crucial part of the Draft Strategy with the ability to get Great WRs late. He is also a member of TEAM BEAST DOME.

With Dez Bryant out for at least 4-7 Weeks, Terrance Williams will take over as the #1 WR for the Cowboys, which will make my Miles Austin comparison all preseason an automatic slam dunk.

If you follow me on Instagram @BEASTDOME, I put all the haters to shame when I came out with a piece about James Jones being a BEAST and a MUST-ADD. He is not only the clear goal line WR for the Packers, but he was inches away from a 3rd Touchdown which would of set the roof on fire. I made sure all VIPs owned him instantly, and even the BEAST DOME Nation. got a freebie with my article about James Jones last week.

My very first Fantasy Football article of the 2015 season was about ASJ and how he would breakout with the Bucs drafting Jameis Winston. You can read that article here.

ASJ is ready to have a BEAST season and fufill the prophecy that he will be a BEAST top 10 TE by the end of the season no questions asked. Mike Evans is only going to make things easier for ASJ as the season rolls on as defenses will not be able to guard everyone. In the end I am not worried about Jameis Winston, he is going to have a rough season with ups and downs, but in the end he is the second coming of Daunte Culpepper.

Want to re-build your team, make it stronger, be ready to BEAST and win your Championship? Signup for the Muntradamus Experience and I will make your team better. Muntradamus Guarantee included, read Package Description clicking the image below. 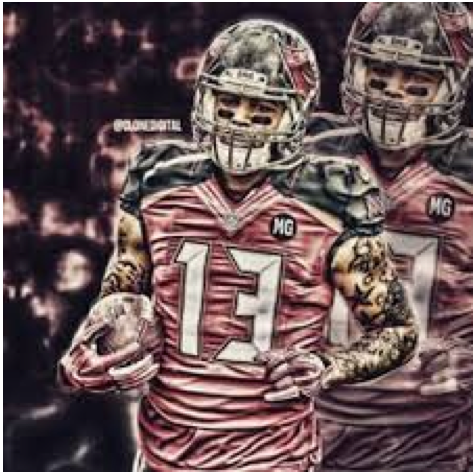