The BEAST BROS in Marshawn Lynch and Arian Foster are together for another season. No Mike Evans on the squad, but an improved core roster with more stars should lead to a big season. This is the biggest Fantasy Football Tournament available to the Public, $150K is up for grabs whoever has the ultimate team, over $6,500 for just winning the league. Without further to do. With the #1 pick in the NFFC PRIMETIME League. TEAM BEAST DOME selects.

Hard to argue going with any other pick. Sure Eddie Lacy could have the biggest season of them all, but I like Lynch to be the man and is in a much improved offense heading into 2015. I am excited for Fred Jackson to be another tool that will make this Seahawks team that much better. I am fine giving up a few receptions a game to Jackson which will lead to more goal line Touchdowns. 20+ TD is automatic for BEAST MODE in 2015.

This was the strategy for all VIPs this season. Grab Lynch, pair him up with Graham. If people are afraid of Jimmy being successful with Russell Wilson they are kidding themselves. With Russell’s ability to buy time in the pocket, Graham will be able to buy time to get wide open. Defenses cannot double Graham, otherwise Lynch will have some big running lanes.

So excited Arian was able to fall back to me. All preseason I was having VIPS snipe him in Round 5, eventually Round 4, then Round 3, and now it is at the point where he is an automatic 2nd round pick. Lucky for me, other teams preferred Lamar Miller and Mark Ingram ahead of Foster in Round 3.

Brandon Marshall is unguardable. I have never seen him look so dominant during the preseason wide open with not a soul around him. Fitzmagic is going to love Brandon Marshall and make him his Calvin Johnson. I expect B-Marsh to have a memorable season which will lead to BEAST numbers and a huge steal.

Stafford is the face of the BEAST DOME NATION as far as QB goes. Stafford looked automatic all preseason with every throw right on the money. He put up MONSTER numbers all without Calvin Johnson. With Mega 100% ready to go, expect this Lions offense to BEAST in 2015.

Really wanted Chris Ivory who went two picks ahead of me. I am in love with Ivory’s strength reminding me of poor man’s Marshawn Lynch. I ended up getting Gordon instead who has all the tools and potential to be a Top 15 RB. All depends on if his O-Line can block as there was nowhere for him to run all preseason. I also need Woodhead to sprain an ankle.

Blount is an automatic 10 TD with 1,000 Yards on the ground this season. Brady not being suspended was huge as the Patriots offense looks like they can score on every possession. Blount is in fantastic shape and should even catch more passes this season as they threw to him a lot during the preseason. Really excited I got Blount for the Buck.

For all the people that are scared about Brandon Coleman. That was sheep news as Coleman did nothing to impress besides in training camp. Colston is Mr. Reliable for Drew Brees and he is lining up where Jimmy Graham would lineup for the Saints. I expect Colston to revitalize his career and be ready to put up a solid 10+ TD season with near 1,000 Yards as well.

Never did I plan on going after Russell in this draft, but Round 9?? Had to make the move, especially owning Graham and Lynch. Two other teams had not selected a QB and I wanted them to pay for waiting so long, one of the teams ended up with Cam Newton as their starter.

T-Will should have his breakout Miles Austin season. He looks much bigger and stronger in 2015, and I expect him to get a lot of targets as teams double Dez often. T-Will was a TD or nothing type of guy in the past, this is the season that changes as Dallas cannot rely on their running game or even throwing to their RB’s like they did in the past with Murray.

Really wanted Crabtree or James Jones to fall my way, neither did. LaFell will be a good option for my team, when he returns after Week 8. Patriots offense is flawless and fun fact, LaFell outscored Edelman last season in Fantasy. I do not expect that again in 2015, but if I can get 70 Yards with the potential TD, I will be happy.

Perfect insurance plan for Graham and Lynch. Unless Wilson runs, I should get every Seattle yard possible. While people are high on Tyler Lockett, he is not the reliable Doug Baldwin that Wilson looks at his true #1 WR.

Texans D is better than ever. Had to take them with my team basically filled out at this point.

Decided to go Back-2-Back on my D/ST after everyone stole my WRs. I wanted to steal the #4 Defense in Fantasy Football. When the matchup is right, I will play them. They are definitely behind the Texans on my depth chart.

The one we call Lorenzo T. is going to have a giant role with the Ravens when healthy. My injury pick of the year is Justin Forsett due to his very small frame, along with factors like how many touches he went through last season and the amount of work the Ravens are planning for him. I do not see him being able to take on so many hits, when the time comes, Lorenzo T. will be the man for Baltimore. It is very possible they go Thunder/Lightning as well every game when Lorenzo T. is healthy.

Need to take a risk on a superstar emerging for my squad. My WR core is not that strong, but Latimer offers the upside if he can do the things he needs to do to gain Peyton’s trust. Sanders has a bad hammy, someone else needs to step up.

If Latimer does not work out, which may be the case. Caldwell can certainly run away with that WR #3 position as he has a lot of NFL experience. He is most likely the first guy on my team to be waived if Latimer does do his thing.

Fitzmagic as my 3rd string QB. Look at Fitz as my Joe Flacco pick of 2015, looks really comfortable with Brandon Marshall and glad to have Chain Gailey as his OC this year. Gailey was the HC for the Bills during Magic’s glory days.

How the mighty have fallen. We will see where Montee signs, I may give him 2 Weeks on my roster before he gets cut if he cannot decide where to go. Turning down contracts is the last thing you want, but at least he remains confident. 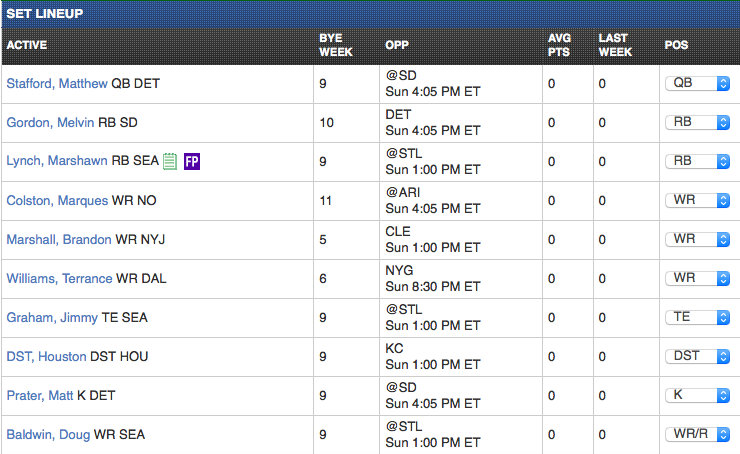 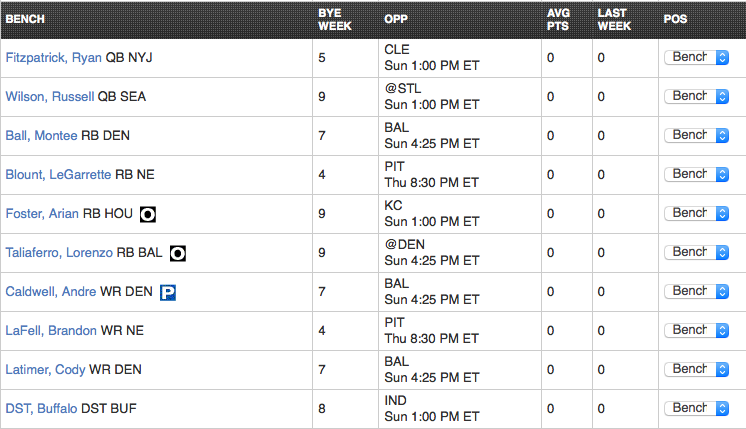