Throughout the career of Tom Brady, the Patriots have had a laundry list of RBs. Kevin Faulk, Dion Lewis, Danny Woodhead, Stevan Ridley, Laurence Maroney, Brandon Bolden, the list goes on and on. The reason why the list goes on and on, and there are so many RBs who have any reputation at all, is because they all played next to Tom Brady. They also had to deal with Belichick who would put RBs in Dog Houses quicker than they were stars.

Over the last couple of seasons, one RB semi-paved a way to getting consistent touches and that was Dion Lewis. The Patriots only lost 1 Game in the last two years when Dion Lewis started, still he was never guaranteed the most Fantasy Production. 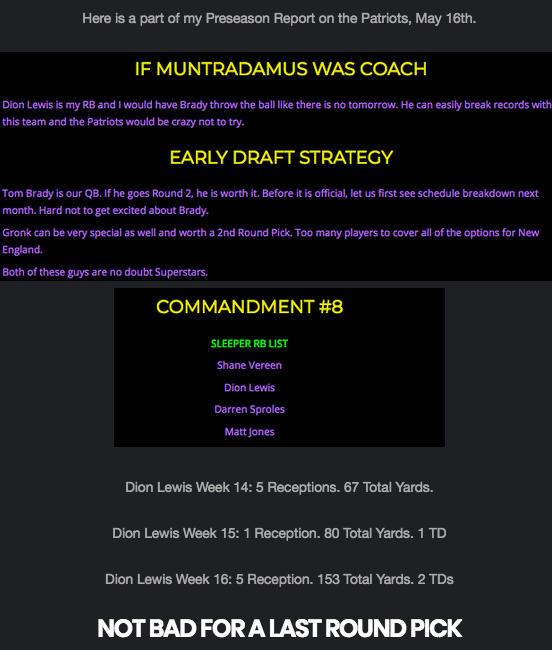 Every RB in the Patriots system over the years has their moments, even Mike Gillislee was a stud last season. With Dion Lewis gone, is there going to be a Patriots RB option that finally stands out?

THE FAST ANSWER IS NO..

One of the best 3rd Down RBs in the NFL, Super Bowl MVP a couple years ago. He will always be the 3rd Down RB to take value away from the starter.

Arguably the one guy who can take a lot of carries as well as catch the ball. Regardless of his position on the squad, the Patriots are ultra deep at RB.

Superstar only a couple years ago. Toe injuries have slowed him down, he was once ahead of Burkhead on the Bengals Depth Chart. Fresh start on a Championship Team, Hill can finally be the BEAST we have expected.

The likely guy who will fall out of the RB rotation all together and could find himself on a new team. Jeremy Hill is a much stronger RB and brings the exact same skill set.

Regardless of what the Patriots offense becomes in 2018. You can guarantee that none of the Patriots RBs will be on the Draft Radar unless an injury occurs. Rex Burkhead has the skillset to make noise and could be a HUGE factor if James White goes down. However if James White is healthy, Burkhead will always be limited to rotating with either Jeremy Hill or Mike Gillislee, then losing snaps on 3rd down to White. Also a high probability that Burkhead losses goal line chances to Hill at the very least who has potential to be the next LeGarrette Blount in that offense.