2020 PRESEASON BEAST IS FREE THIS YEAR!

Before we focus on this years Draft Guide, let us look back at me calling everyone out this Preseason and leading people down the right path if they listened.

*Everyone was telling people to waste a 3rd/4th Round pick on Ekeler who was a RB3 at best once Gordon returned. Tony Pollard who they said take in Round 8 instead of some of the great BEAST Dome Values below, we know how that ended up.

THEN MY HARLEM GLOBE TROTTER TOUR

A MAN WHO WAS PASSIONATE ABOUT DARRELL HENDERSON

3 WRS THAT WILL BUST YOUR DRAFT

3 RBS THAT WILL BUST YOUR DRAFT

3 QBS THAT WILL BUST YOUR DRAFT

Josh Allen, Cam Newton, and Kyler Murray. Did not turn out well for those calls from my guest.

I PRESENT TO YOU.. THE BEAST DOME STRATEGY

The strategy this season was loaded and simple. Go after Drew Brees. Everyone was undervaluing him as he was on the board as the #9 QB available in the 6th or 7th Round of every Draft. Target Acquired. Kirk Cousins and Tom Brady were the backups, and Jacoby Brisset was the QB who all the MVPs added when Brees went down.

Drew Brees averaged over 300 Yards and 2.5 TDs/Game had he been healthy. His stats would have been better than Tom Brady’s most recent MVP season averaged out to a full season. Brady was key to start the year when he was needed with Brees down, then Brady lost his weapons. Kirk Cousins picked up the slack to hand it off to Brees in the end.

RB was an interesting position for the BEAST DOME strategy. Round 1 it was to get either Kamara or Lev’Bell, neither worked out really but at least were manageable RB2, not exactly what we drafted them to be. However all the RBs Round 3+, those RBs I slipped out were the difference especially drafting Carlos Hyde & Go BEAST with no resistence. How many 1,000 Yard Rushers do you count? 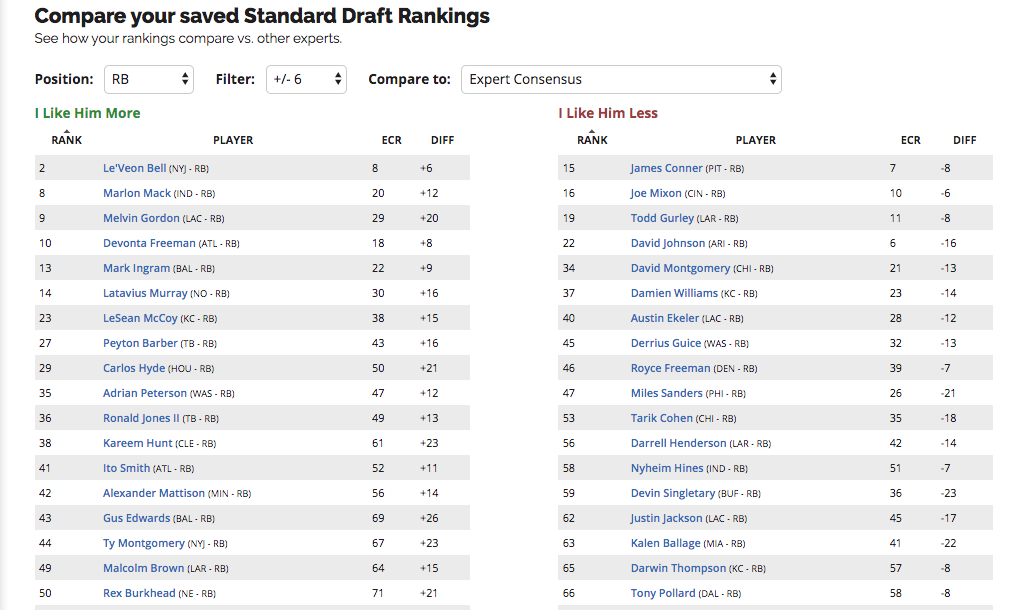 Had everyone draft Melvin Gordon no problem easy snag. Marlon Mack was an easy steal, Devonta was great when healthy, Mark Ingram was a BEAST. All amazing values at the point they were drafted.

Than the late guys, Latavius was a RB1 for 2 weeks when Kamara was out, the reason we drafted him. Hyde is the best RB call of anyone as he is on pace for a potential 1,200 Rushing Yards. Will be updated Sunday. Then you got, AP + Jones + Hunt + Edwards + Burkhead all great deep sleepers.

Most noteable on the BUST side.

Nearly every pick was a BUST including Hendy + Darwin + Damien Williams + David Montgomery, the whole Motley crew. Drafting Conner or David Johnson in Round 1/2 ended your season. Some experts had David Johnson as the #1 Pick.

Year after year, the WR strategy always comes clutch. Mike Thomas was the #1 WR on my rankings as was nothing short of a BEAST. Later round WR sleepers always come in hand, and this year was no exception to the rule. 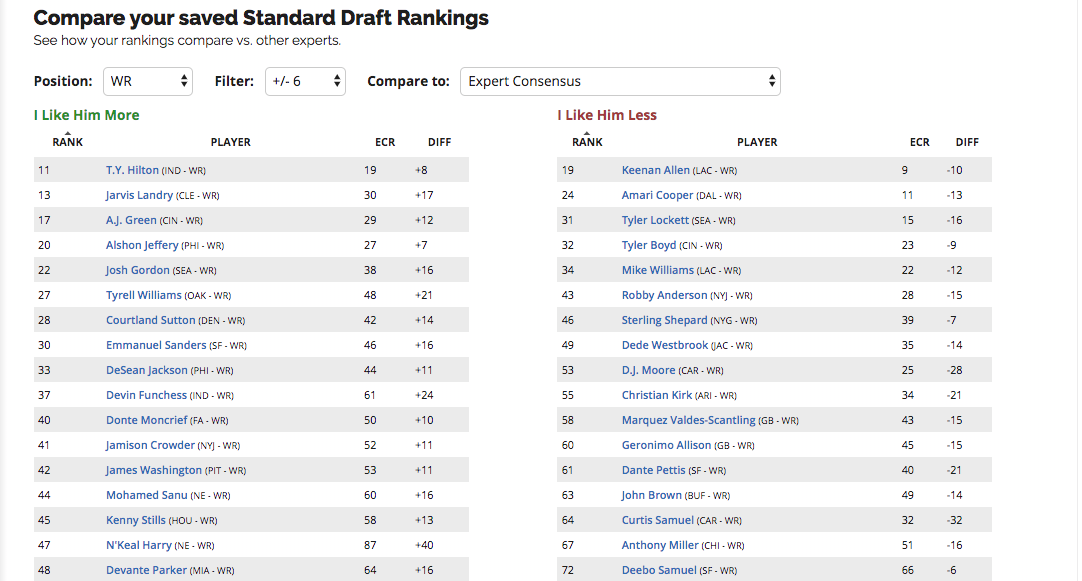 Landry was great the 2nd half of the year and was a vital part of the Draft Strategy the round before you drafted Jared Cook. Alshon was good when healthy, Sutton and Sanders were both great values. The rest were a lot of injuries. Happens, but there was enough value around to bang out a good team. Most important we avoided all the BUSTS. Not shown is Edelman who was also a featured WR in the Draft Guide in Round 4 if he fell, which he did. That is if Marlon Mack was not on the board, which he was.

The Jared Cook strategy, everyone was told they must draft Jared Cook. He was the First Commandement in my Draft Day Commandments. How did his season turn out? Did nothing Week 1, Drew Brees got hurt Week 2. Everyone was getting frustfrated and wanted to get rid of him by Week 4, but I started to yell at people to keep him and hold on. Season started to turn around with a couple TDs, then he got injured, then people were asking if they should waive him. Annoyed the fuck out of me.

Cook finishes the regular season as the #6 TE, (#1 overall PPG Week 5 – END) only played 13 games, 2nd in TDs for the entire position, however most important of all. The #1 TE in Week 16 of the Fantasy Football Championship with 84 Yards and 2 TDs. Not to be outshined by his other 2 TD game in Week 14 making him the highest scoring TE during the Fantasy Playoffs.

I think this says it all right here. 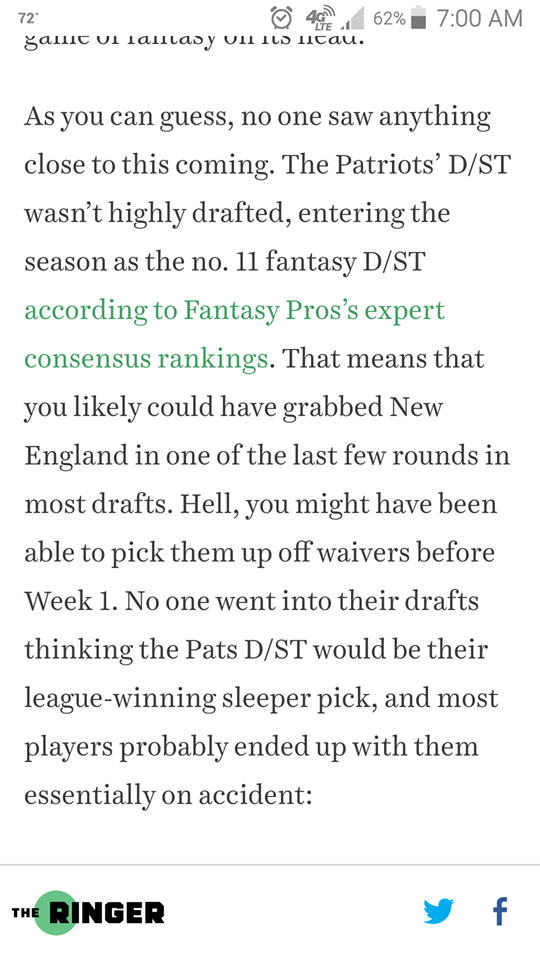 I see the trends before the other sites do. Check out the Rankings above, find me a site that can show you better. I love them all and wish them all the success, but there is a difference between a sheep and a BEAST. I want to help you all and that is why I am making my programs Free in the Future with Deposits on Fantasy Sports sites.

LEAVE TESTIMONIALS ON THE BOTTOM IN COMMENTS 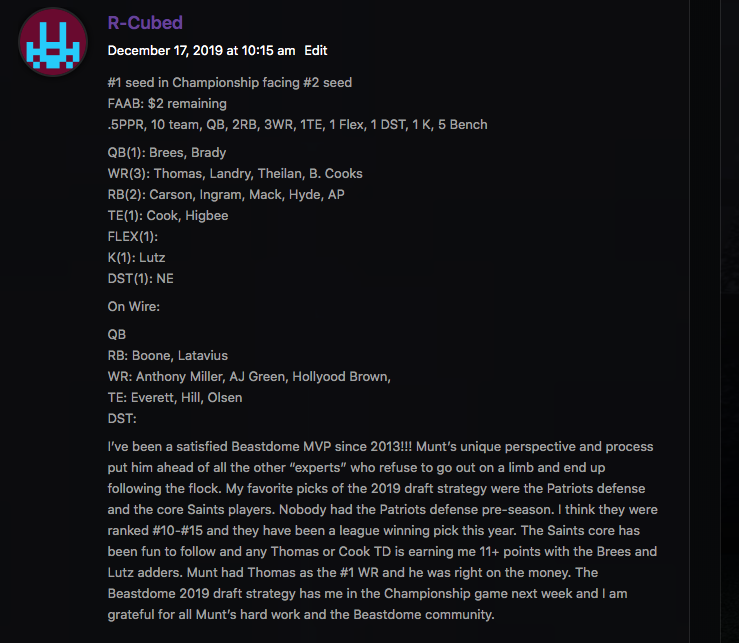 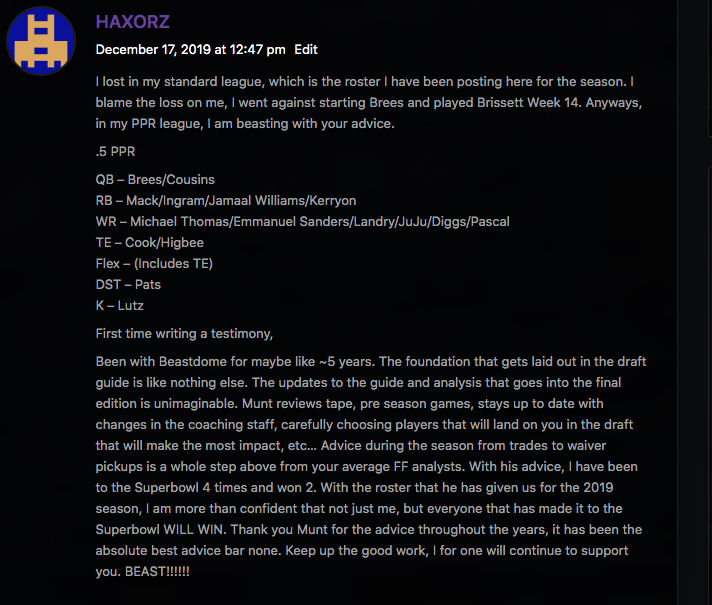 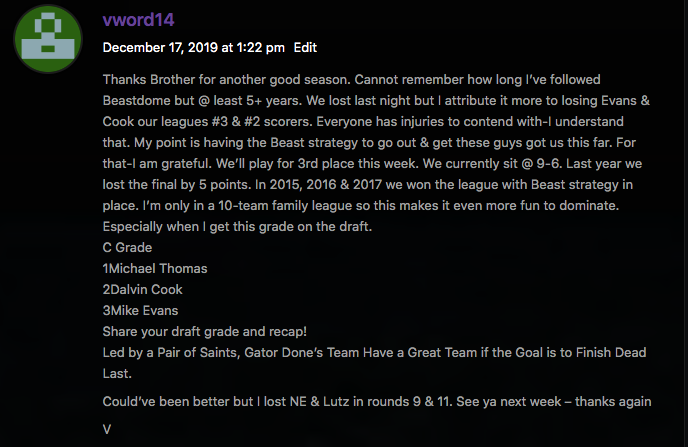 2020 PRESEASON BEAST IS FREE THIS YEAR!