When you hear the term. “The Groin was torn from the bone.” You automatically think the absolute worst and that Arian Foster is all but done for the 2015 season. While every Fantasy Expert in the Industry is screaming, “The sky is falling!” I am here to tell you with confidence that Arian Foster will win you your Championship, at a discount price. 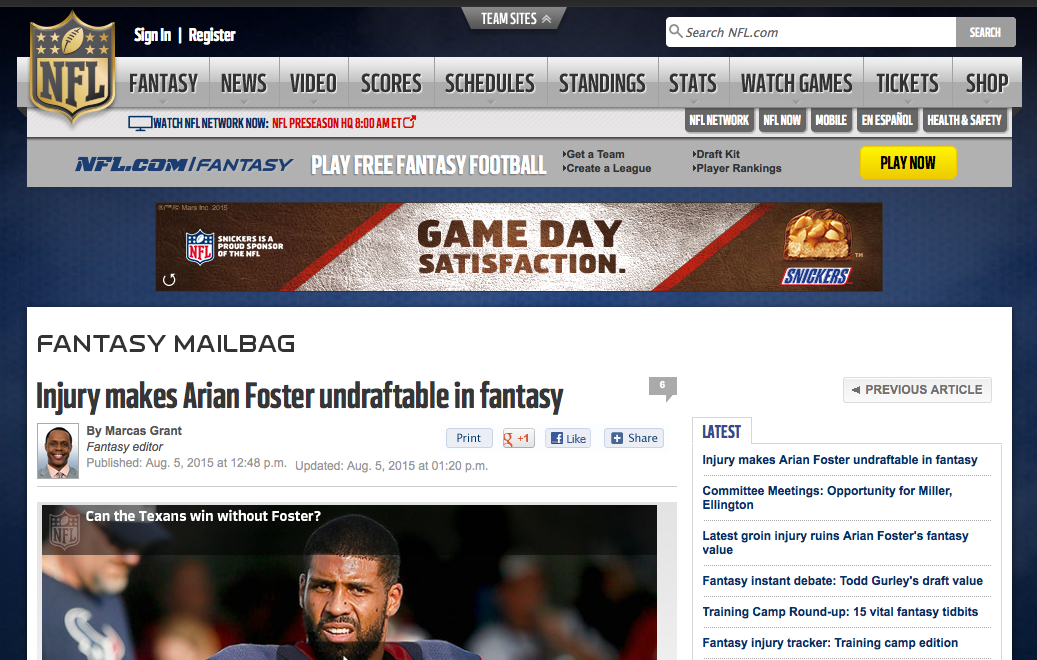 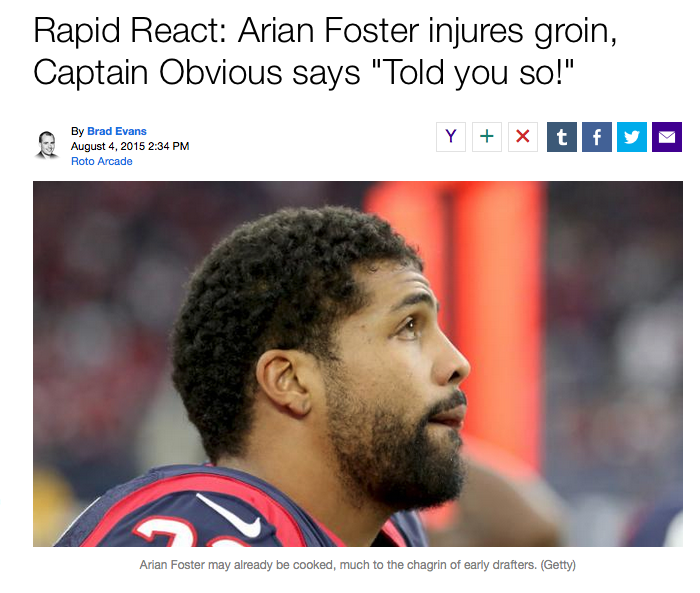 Arian at the earliest will return to the Texans on Week 6. He is not eligible to return until after Week 8, Texans on Bye Week 9, so the earliest return is against an improved Bengals Run Defense on Monday Night Football, Week 10. That is 8 of 16 games missed, at the very least.

The fact that Arian Foster has 3-4 Weeks (Week 6-Week 10) to return to Football shape should have nobody worried about conditioning. While it is unfortunate he is missing half of the Football Season, if not a little longer. You still will get the luxury of Arian Foster having a Fresh Body as far as amount of damage from all the hits. If Arian was healthy in Week 1, he would probably have accumulated over 160 Hits through the first half of the season.

The fact that the Texans did not sign Pierre Thomas, and appear likely to head into the 2015 season with a RBBC featuring; Alfred Blue, Christian Polk, and Jonathan Grimes. Shows that the Texans are confident that Arian will be able to return this season.

Now a lot of skeptical experts will say, “BUT HE TORE THE GROIN OFF THE BONE!” While it is no doubt a gruesome injury, surgery is a whole new animal compared to what it used to be. Every year we see players get injured in all sports, every year we see these players return to form. The fact that Arian has the luxury of going under the knife this early before the season starts, as opposed to trying to play it out, will have Arian returning to his vintage self sooner than later.

A lot of skeptical experts will also say, “The Texans cannot win without Arian. By the time that Arian returns, the Texans will be out of the playoff race.”

To that I respond with, the Texans Defense is so ELITE with the addition of Vince Wilfork/Rahim Moore and a healthy Clowney putting pressure on the QB with JJ Watt; The Texans Defense can win games by themselves. While the running game does take a hit, and they do lose their best offensive player.

Brian Hoyer is coming over as the new QB who worked under Bill O’Brien when he first came into the league, Hoyer was a Patriot from 2009-2011. Hoyer knows the system the Patriots ran, and it is the same system when Bill O’Brien was the Offensive Coordinator that led the Historic Tom Brady season (2011). Where Brady threw for over 5,235 Yards and 39 TDs, while Hoyer in Year 3 of his young career was watching from the sidelines learning what Brady was doing in the same offense the Texans will run today.

The Texans Passing game is in a better position this season than it was last. Yes they did lose Andre Johnson, but the addition of Nate Washington and Cecil Shorts III, who both never had strong QBs, are now in a vertical offensive system that is much quicker heading into the 2015. DeAndre Hopkins is the young star of the group, but Cecil and Nate Washington are two veterans that have been very successful on horrible teams.

Before you start bashing Brian Hoyer. Many of you who followed my Draft Strategy in 2013 were told to draft Josh Gordon. Gordon was the #1 WR in Fantasy Football that season, and Brian Hoyer was the QB who made it all come true. Now Hoyer goes to the Houston Texans who are in one of the worst divisions in the NFL with the re-building Titans and Jaguars (Nate Washington and Cecil Shorts III, ex-Teams). The Texans will remain competitive for that Wildcard spot and should be at least an arm length or two away from the Indianapolis Colts before Arian returns.

The Texans Passing Game will prevail.

Back to the man of the hour. Arian Foster.

I preach this every year for all Fantasy Sports.

“ALL YOU HAVE TO DO IS MAKE THE PLAYOFFS”

Does not matter what your record is, once Week 14-Week 17 hit. Everything goes out the window and it is all about winning now.

If you make the Playoffs starting on Week 14, you have yourself a very nice end of the season for easily the most talented RB in the NFL. Arian Foster will score Touchdowns in every game Week 14-Week 17, he will also throw in BEAST numbers that most other RBs cannot touch.

You do not have to spend a high draft pick on Arian Foster. It is very clear Experts are leading the Sheep to not take him in general.

I am telling you that not only should you draft him, but that you NEED to draft him. You all have zero excuses not to have Arian Foster on your Fantasy Football team this season who is free falling in Fantasy Football Drafts.

If you want the strategy on how to build your team this season so that you can include Arian Foster, and still have the confidence that you will not skip a BEA’S’T all season long. The WR Rankings this season is like taking candy from a Baby. There are Mid-Round RB Sleepers, there are Early-Round RB Sleepers. Of course there is Matt Stafford sitting in all of your laps.

This is the year where it is easier than ever to take home that Championship Trophy. Unless you want to be a Chicken Little screaming that the Sky is Falling, continue to keep up with the BEAST DOME DRAFT GUIDE (Located on the right side of your page). Or take it one step further and just get all of my Rankings/Predictions/Analysis (All from Scratch) with Draft Strategy (All From Scratch) with Nightly BEASTcast Episodes (To Keep you up to Date on Training Camps and Preseason Football with my Fantasy Perspective).

Then signup for a VIP Package.