THE BALLAD OF JAMAAL CHARLES

For those that are rocking like true BEAST DOME G’s. You will remember my constant predictions of telling people that Jamaal Charles will ruin your season when everyone was all over Jamaal Charles like a teenager at a Justin Beiber concert in 2010. 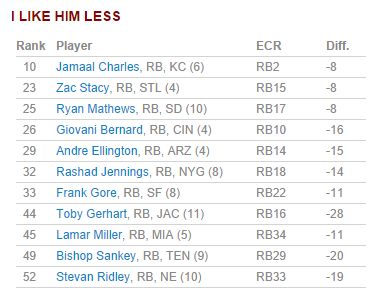 As you can see, I called the regress of Jamaal Charles’ tipping point in his career. He was a Top 2 Pick in 2014 and 2015, both years he ended up digressing. I am not afraid to point out the obvious when I see a Red Flag at RB, and you will see many more articles throughout the preseason that show I was spot on this through players’ careers.

Here is a  BUST Jamaal Charles video I made in 2014

Is there another Jamaal Charles among this year’s Fantasy Football Field?

ONLY ONE WAY TO FIND OUT