If there is anything you take away from BEAST DOME.

This is the strategy of all Fantasy Football strategies.

This is a strategy that I have been preaching to BEAST DOME users from day 1 of BEAST DOME being alive.

Any and every BEAST DOME NATION VETERAN will tell you they follow this strategy religiously.

They will tell you it has led them to many Championships. 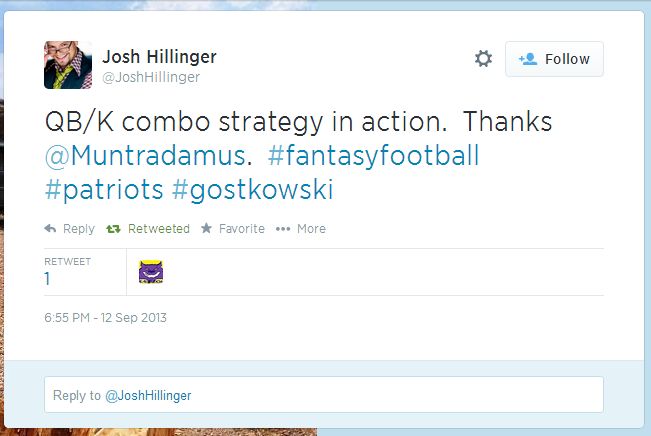 & Many More Testimonials on the Strategy that can be found throughout the site.

Let me paint you a picture. You own Tom Brady on your Fantasy Football team.

Tom Brady drives down the field, he is stopped short of a 1st down, Patriots have to settle for a FG.  Next possession, Brady does the same thing.  He is stopped short of the end zone, another FG.  This goes on at least 4 different times throughout the game.  You think your week is ruined, because Brady ended up with the yards, but not the TD’s.

The Kicker position is not about getting someone who will get you double digit points every week, it is about having a good insurance play to make sure your 30+ Point QB, ends up with 30 total points, at least.

You want a kicker who is going to be part of a high-scoring offense, but you want your kicker to be the insurance play for your QB.

Here’s another example: Tony Romo played with a Broken Rib in Week 3 against the Redskins (2011).

By having Bailey that week, the Tony Romo owners were saved from what could have been a complete goose egg, near automatic loss.
Fantasy Football is all about having a strong QB. If your best QB has a bad week, your whole team could be in for a big downfall.

DRAFT THE KICKER FOR YOUR STAR QB.

This 2015 season your QB/K Combo is Matt Stafford and Matt Prater. Matt Prater is kicking in a Dome Week 10 – Week 16. It is already a huge advantage to be kicking in doors once we hit November, Prater will be doing it all throughout the Fantasy Football Playoffs. He is also has one of the strongest legs in the NFL. If you own Matt Stafford, which you all should. Then you..

MUST OWN MATT PRATER

Make sure to read.

If you want more strategy and more BEAST picks to give you a leg up not only in Season Long Fantasy, but Daily Fantasy Football as well.

SIGNUP FOR A BEAST VIP PACKAGE