I PITY THE FOOL (NFFC PRIMETIME)

First and foremost we have to talk about Matt Stafford. While many people are nervous from last Sunday with his average 246 Yards/2 TD/2 INT. You first have to look at the big picture before you examine the stat line. Something all the Sheep sites never do.

First let us look at the good. 1st Drive of the game, he marched the Lions down the field only to see Ameer Abdullah vulture the easiest TD of his career as it was a 1 on 1 easy cutback. 7-0 Lions. Then to make matters worse, the Lions got a pick 6 TD, up 14-3. Usually when a team is up 14-3 they are already in kill the clock mode and escape a road game with the victory. Stafford was able to get a TD on the very next drive and made it 21-3.

After the Lions were up 21-3 they started going more and more run heavy. They were not converting 3rd Downs, and Matt Stafford was twice intercepted. The Lions weren’t going for the kill anymore, they were playing things safe. Eventually playing things safe put them in a situation to lose and luckily for all us Stafford owners what was almost an INT on the final drive, was reversed and led to a Theo Riddick TD reception.

Like the Detroit Lions, Team BEAST DOME started out their season (0-1). 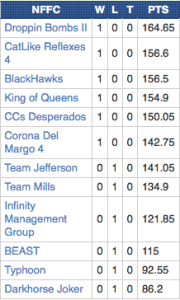 While a loss is a loss, there are plenty of wins for Team BEAST DOME moving forward.

With T-Will now basically the man in the Cowboys passing game to for at least 6 Weeks, this is going to turn my WR corpse from average, to Rock Solid. T-Will was featured heavily to close out the Giants/Cowboys game and you can say with no hesitation, things are going to be good for Terrance Williams moving forward as he is an automatic Top 20 WR Option.

Arian is already back practicing with the team, which nearly guarantees he will be back by Week 3 to face Tampa Bay. I was nervous about Arian falling back to me in Round 3 as I was heavily contemplating taking him in Round 2, since I would have to wait 12 picks. Luckily he fell back to me, and my team is a Week away from reuniting the BEAST BROs in Lynch/Foster.

While Blount returns this week to face the Bills. Blount will sit on my bench for this matchup as the Patriots are nearly guaranteed to be in Shotgun the entire game against the Bills Pass Rush. When the Patriots go in Shotgun, Dion Lewis will more likely than not be the RB. While Blount will probably get his 10+ Carries this week, I do not have enough confidence in playing him against the Bills, especially with the starting Center out this week. I expect quick throw after quick throw from New England, which means Blount will be on my bench.

Still I highly recommend you Buy him.

Lorenzo T. Zo Taliferro. The nicknames add up for this guy, but I am going to stick with Mr. T as the final nickname for my guy as he returns for the Ravens. The matchup is nice against the Raiders who are without starting DT, Justin Ellis. With Ellis out, the middle of the Raiders core will be a bit exposed, and the strength of the Raiders Defense is the speed on the edges with Khalil Mack and Aldon Smith.

With Justin Forsett nursing a bad shoulder, even though he will play, there is a good chance he is not the goal line back for the Ravens this week. Even when healthy Mr. T is the Power back and there were a lot of talks this preseason in having Forsett and T combine for a Thunder/Lightning tandem. Watching Buck Allen take 10 carries last week, I am confident that the Ravens will give at least that to Mr. T in Week 2 against the Raiders. Especially if the game gets out of hand.

With all that, I am going to bench Melvin Gordon this week who has a tough matchup against the Bengals on the road, and even though he was explosive. I was getting Woodhead too often and if the Chargers go Pass Heavy which is always possible, there will be more Woodhead in Week 2. Even though I read a report he will get his redzone work this week, that being Melvin Gordon.

I expect the Ravens to be in the Redzone more than the Chargers, and I expect Mr. T to find the endzone.

Between Andre Caldwell and Cody Latimer, they are both garbage and will likely never play for me. Latimer is the #5 WR and Andre Caldwell is the #4. Still I decided to waive only Caldwell this week in an effort to play some defense.

Not just any Defense, but to grab the Ravens D/ST off the Wire since they have a nice middle of the schedule shaping up.

The budget for NFFC is $1,000. I just wanted to guarantee I grabbed the Ravens even though they will never see my lineup as I have the best group of D/ST in the land. I was playing Defense by grabbing the best Waiver Wire Defense.

The start this week at D/ST is going to be the Texans. Brian Hoyer did a nice job of setting up the Chiefs with 2 easy TD’s thanks to turnovers inside his own 20. The Texans really only had one bad play on Defense and shutdown the Chiefs the entire 2nd half. Plus J.J. Watt is already in the Hall of Fame.

The Texans travel to the Panthers to face Cam Newton who gets sacked more than any QB. I don’t have stats to back that up, but he is literally a standing statue. The Panthers also have no options in the passing game besides Greg Olsen who can hardly stretch a field. The running game of J-Stew has no chance to do anything this week, and Cam Newton is going to be making bad throws all game.

Texans will be my starting D/ST this week, I’ll let the Bills do damage on my bench once again. I would be impressed with any damage they do to Brady.

This is the big decision TEAM BEAST DOME needs to make. Do I roll with Matt Stafford against a Vikings Defense that is not bad, but not great either. Every year in the Draft it seems like they always have a focus on getting big DBs so they can slowdown Megatron, still he is Megatron. The Lions are going to make sure Mega gets his 10+ Targets this week and infact anything less than 12 would be semi-shocking. The Lions will also likely own T.O.P as the Vikings offense is really no threat at all, and you can guarantee the Lions will stack the box to force Teddy Bridgewater to beat them.

Or do I start Russell Wilson. The Seahawks offense ran over 70 plays in Week 1, and you can guarantee they will continue to do damage, especially against a Packers Defense that really lacks talent and let Jay Cuter/Matt Forte drive down the field at ease against them. Russell Wilson looked decent at QB last week, but never took any shots down the field, it was all dinking and dunking, though the same could be said for Stafford.

While I expect them both to do well according to my Week 2 Rankings (Matt Stafford #5 QB) and Russell Wilson (#4 QB). Barring any weather, I know in my heart that the best answer is Russell Wilson this week.

The Seahawks are going to need to put up more points than the Lions, I also have the insurance with Matt Prater so in a way I am getting a piece of Stafford in my action. It kills me to make the decision, but I am sure you all understand it is the smart one. Russell Wilson had no intention of being on my team until he fell to me in the 10th Round.

In the end that pick cost me James Jones who went Round 11, and this is the way I can get some revenge on that pick by getting Russell Wilson in my lineup now. While this is not a pick of emotion, it is a pick of being non-biased and Russell Wilson is the better starting option this week.

Like I said, Stafford is still #5 in my Rankings for Week 2. 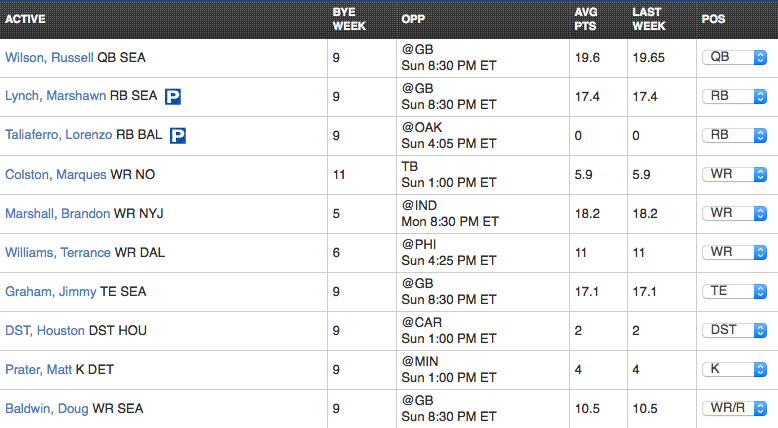 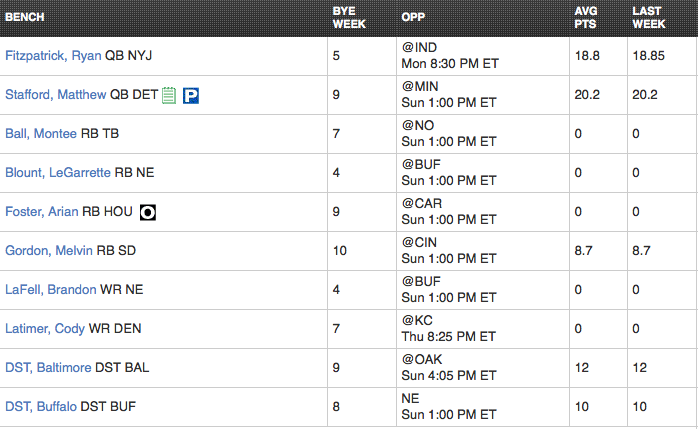