THE HILLMAN’S HAVE EYES

If you know anything about me as a Fantasy Football Expert. I am in love with whoever the starting RB is in Denver with the most potential. In 2012 I ranked Willis McGahee higher than every expert as he was the BEAST of all BEASTS.

Now we come to a new level of the Denver Broncos RB situation. After watching Montee Ball run with less than half the aggression he was running with last season. His job is slowly starting to fade away. Ronnie Hillman is looking explosive and hitting the hole as hard as Adrian Peterson would on a handoff up the middle.

Last week on FantasyPros I ranked Ronnie Hillman the highest of any expert, as well as winning the #1 overall RB Expert for Week 7. I found my own system that will work within the FantasyPros system and I will be using it the majority of the year. Regardless, Ronnie Hillman has made a huge impact on the running game since Montee has been out. 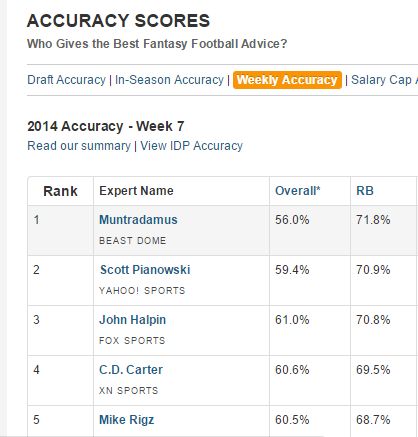 Moving forward the Broncos RB situation is tricky. Ronnie Hillman has done too many good things to go back to the bench and stay on the bench. On the other hand, the Broncos really want Montee Ball to be their BEAST RB of the future, even though he is not showing it in 2014. The Broncos are still committed to Montee Ball in the long run, which means when Montee Ball comes back. He will have his chance to show the Broncos what type of RB he can be. With some competition, Montee will have to be a BEAST and fight off the groin injury which is sure to limit the rest of his 2014.

If you are a Montee Ball owner. Hold on tight or try to pull off a trade for a Vincent Jackson type of WR. If you do not own Montee and have WR depth, do not be afraid to throw a nice name to get this superstar at a premium buy-low. While Ronnie Hillman is exploding away with the job, Montee Ball is the future of this team and he will get every shot to show he is the guy when he returns.

In the end, you are probably looking at a 50/50 split that will limit both of their fantasy potential to a even lesser form of Trent Richardson/Ahmad Bradshaw. Montee will get his shot, but the only way Montee Ball returns to the 2nd Round draft value that you took him at is…A Ronnie Hillman fumble, just like how Montee Ball lost his job to Knowshon Moreno in 2013.