FANTASY NBA BEAST OF THE NIGHT

There are times in your life where you will walk by a Basketball court and see one giant dominating. A boy or a Man who towers over the competition and seems like he is playing with a bunch of children no matter his age.

Tonight is one of those nights you will see that in an NBA game when Andre Drummond and his dominant BEAST frame. Goes up against a trio of undersized Centers in Indiana. An Indiana team that also likes to play small ball and push the tempo. Which leads to more rebounds for Drummond who will have nobody in his way.

If you remember TEAM BEAST DOME has Andre Drummond, he has helped lead the way to 1st in Rebounding for my squad. UPDATE on Team coming later this week.

11/3 MUNTRADAMUS PLAY OF THE DAY 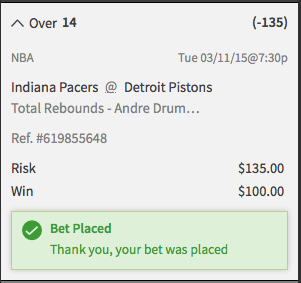