TROLLS CALLING ME OUT?

There are a few people in the chat room who have been calling me out.

Someone even said have fun chasing John Paulsen, who ranked Cord Patterson and Toby Gerhart as Top 15 options at their position last season.

Someone even said I am wrong more than 50% of the time..

So with every team now playing 1/4 of their games, let us see how my preseason BUST picks are doing so far. Or I like to call them, “Sheep Picks” because these are the players you would be drafting if you had gone to a John Paulson, or Yahoo, or ESPN, or CBS, or basically any other site.

I feel telling people to avoid these guys at all costs, is just as important as having you draft the players you want to draft.

Outside of Cam Newton, this list is perfect. Before anyone says anything about an injury to Tony Romo, let me remind you how much I was penalized because of an injury to RG3 last season. I wrote an article about Tony Romo being a BUST this preseason, and age/broken down body had a lot to do with it. 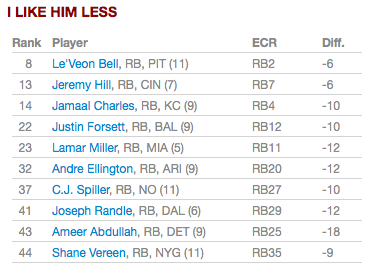 Once again, I never want to root for injuries, and I never like it when I am right about a player being injured. It’s just a factor I have to weigh in when analyzing a player. Besides being a smaller RB, I did not like that Jamaal was taking less than 15 carries a game last season towards the stretch run, which showed he was not a durable BEAST. You can say it was a freak accident, but after 71 carries he is now done. I took a ton of heat on Montee Ball last season being injured and watching CJ Anderson blow up, who I made the target pickup instead of Ronnie Hillman last year, but Charles is now done and it will be interesting to see how the Preseason Results tally up.

This list is 100% correct, outside of Le’Veon Bell who no doubt takes a hit with Big Ben injured, still not Top 10 in production at the RB spot yet. If you think Joseph Randle will remain “Thee Guy” for Dallas, you can watch and see how that develops. 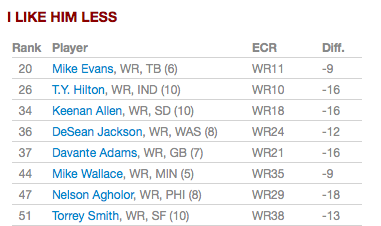 Nelson Agholor, pretty sure that was a John Paulson guy. All of those who jumped on the Davante Adams train better find the next stop, last season my ranking was destroyed because of my Ranking of Jarrett Boykin and was 98% accurate on every other play including being in the Top 99%tile of having Mike Evans Ranked the Highest, Jeremy Maclin, Golden Tate, and Steve Smith Sr. This season my BUST list is almost 100% accurate.

Keenan Allen is the only player I am wrong about on this list, but with the return of Antonio Gates and with Stevie Johnson likely healthy next week. Keenan Allen will not be the consistent #1 WR you have been leaning on early on.

It is unfortunate I had my Draft two days after the season started instead of taking advantage of my Pre Preseason Rankings that were dead on accurate before the Preseason Started.

I can guarantee you most of the VIPs, if not all of them are very happy with their team and still remain confident with their squad no matter where they are in the Standings.

With Arian Foster now back, and Marshawn Lynch coming back for Week 6. Everyone is excited what those two can put together, and Matt Stafford finally has an easy matchup this upcoming Sunday. It is unfortunate Stafford was benched as the Lions threw the ball 37 Times with Dan Orlovsky, could have been Fantasy Garbage Time Gold for Stafford.

Also know, the Trolls are three people on this site. There are two unregistered users and one registered user, all Non-VIPs who are spamming the Chat and writing the 1-2 Comments a Week my IT guy deletes as soon as he reads their first sentence.

Season is a long one, yes Week 5 was not pretty for most who were really leaning on Chris Ivory and Brandon Marshall early on this season, only to have them sit on the bench during their bye (No expert Ranked them higher). There is still plenty of Football left.