Sorry for the delay on TEAM BEAST this week. Having some site issues but we are back at full strength, similar to TEAM BEAST after a HUGE week from the Squad with the highest score of any team and pulling ourselves right back into the scoring race of the NFFC Primetime $1600 League Entry Fee.

Sunday Week 7 could not come soon enough, and luckily that day is now here.

The weakest part of TEAM BEAST has always been WR. I have started players like Jeremy Kerley when they scored a Touchdown, I have also been riding players like Doug Baldwin/Marques Colston/Terrance Williams who put up games that resemble a backup TE.

I may not have found my prayer, but I do believe I found my answer.

After 4 receptions for 84 Yards in Week 1, nobody thought twice that Roddy White was about to go through the worst stretch of his NFL Career. Even Leonard Hankerson was a more productive player than Roddy White Week 2-5, and it appeared evident that White fell to #3 on the depth chart. The team that owned him in my league dropped him before the Thursday Night game last week against the Saints, which led to Roddy scoring his 1st TD of the season.

They always say the 1st time for anything is always the hardest, but once you get through it the first time, the rest will start to flow. I decided to go all-in as my team is desperate for a WR option and now I have another veteran to add to my squad. The schedule is not tough for Roddy, and two weeks in a row Roddy has seen more targets than Hankerson. Now that he is with me, it is his time to shine. 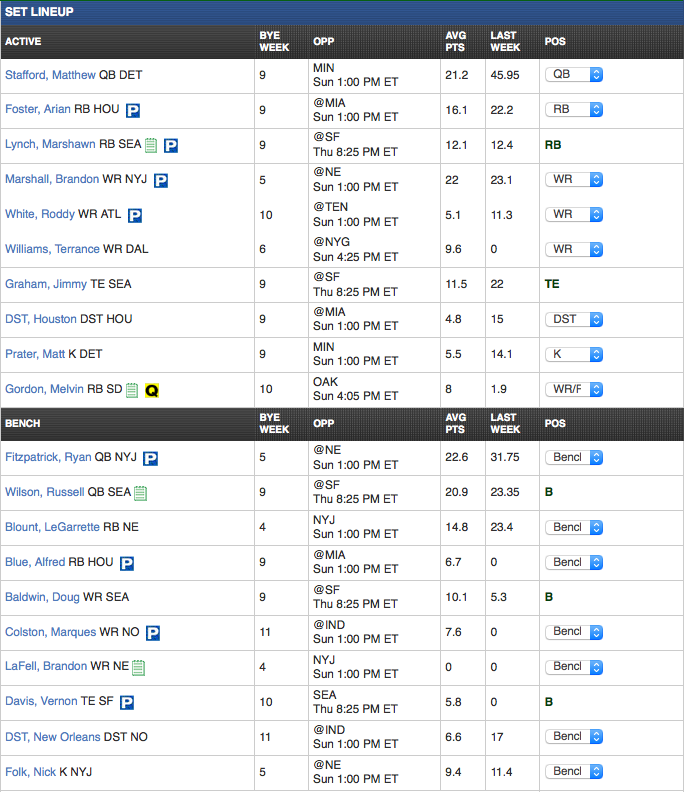 I still have Brandon LaFell coming back possibly this week. He will stay on my bench regardless as I would just be happy if he played a majority of snaps against the Jets. When LaFell is back he will be my every-week WR#2 and then Roddy will battle with Marques Colston/Terrance Williams for that WR #3 spot while Doug Baldwin is a desperate play. Not holding my breath on Marques, but Terrance Williams could return to the numbers I was expecting when Dez and Romo return.

I pulled out the Waiver Wire Moves early for the Week 9 that is going to put everyone’s team in some sort of Matrix where all of their players are on Bye Week. At QB/K you will want to go with Fitzmagic/Folk who are home against the Jaguars. I dropped Rawls to add Folk before the Thursday Night Football game, it is clear with Fred Jackson back Rawls is worthless.

For D/ST the Saints go up against the Titans Week 9, in New Orleans. Marcus Mariota will make mistakes when the pass rush gets to him, and that Saints Pass Rush is a different animal at Home. You could even play the Saints in Week 10 against the Redskins. Game is on the Road so the Saints D/ST will need to build momentum in Week 9 to make that the clear cut start.

Big decision as GM of what RB to start this week. I see the Jets playing this game 100mph which means it is not going to be a Patriots Blowout with Blount seeing all those goal line carries to save his day. More of the Dion Lewis type of matchup as Brady will not have Edelman being Edelman with Revis Island holding him in Jail.

Melvin Gordon coming off the most embarrassing game of his career fumbling twice in GB miles away from his Alma Mater Wisconsin where he had a boat load of people in the stands. The matchup against the Raiders is a good one as this team cannot stop a lot of offenses and Melvin Gordon is angry and has a lot to prove. I expect him to be heavily involved in the game plan and make his statement of why he is the Chargers RB of the future. He also needs to score his first TD of his career on top of that. 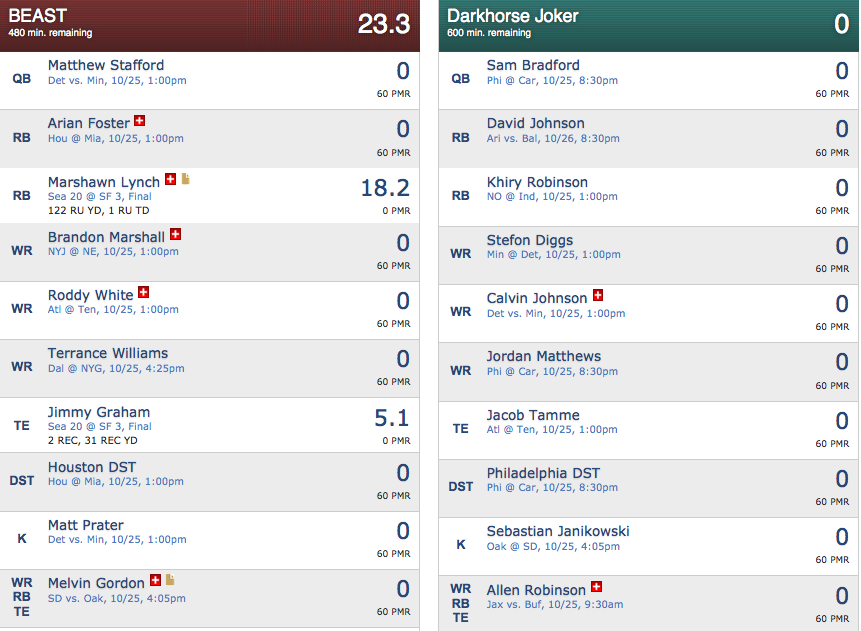 This is why you do not go with the strategy of WR/WR in Round 1 and Round 2. This team selected Jordan Matthews in Round 2, Alshon Jeffery in Round 3, Sammy Watkins in Round 4, Allen Robinson in Round 5. His Top 2 RBs are Ryan Mathews and Tevin Coleman. Now he stands with this team.

Silence of the Graham killed my team once again, the horror movie continues. Season on the BEAST had a monster Thursday Night. Time for the rest of my team to step up and win this cupcake matchup. Megatron will probably cancel out Stafford, but then he has nothing else after that as long as Carolina shuts down Jordan Matthews and Allen Robinson does not go off in London.