The consolation Playoffs Begin for TEAM BEAST DOME. My only chance to salvage what has been an injury riddled season where my 1st/2nd/3rd round picks have all gone down.

No need to dwell in the past. I have new life coming off of a 2 game winning Streak. I now have a strong enough WR core where there is plenty of upside, and a RB core that is less to be desired. Funny how things can flip around.

My first debate that many of you are wondering is..

While Stafford has looked really good as of late, despite not throwing the ball much in the 2nd half of the Packers Thursday Night game due to lead. Things are going to be a little tricky on the road as they face a Rams Defense that always plays better at home. This week though, things are different for the Rams Defense. Robert Quinn who was out last week, is now done for the season. Throw in safety TJ McDonald sitting this game out, and you barely have the same Rams Defense. Throw in Janoris Jenkins missing this game, and the Lions actually have a very good matchup.

Stafford should be right around Top 10 QB production and is a solid start in most leagues this week despite how it sounds out loud. “Stafford @ STL where the Rams Defense always plays stronger.” This is a Rams Team that has thrown in the towel.

Fitzmagic has become a house hold name to to the BEAST DOME NATION. The guy simply gets it done, and gets it done at such a comfortable rate you never have to worry about him. If it was not for a game against Oakland where he hurt his thumb in the 1st Quarter, we are talking about a Top 5 QB overall stat wise.

This week the Jets play the Titans. In New York. Fitzmagic is coming off of a 390 Yard passing performance which lead to a victory over their cross town rivals in the Giants. Brandon Marshall has been playing MVP football all season giving brand new life to the passing game, and Eric Decker has been tough to stop with so much attention on Brandon Marshall. Also important to note that Ryan Fitzmagic used to play for the Tennessee Titans. He is the type of QB who likes to get revenge against his old teams that throw in the towel against him early. While his games against Houston and Buffalo have been less than average this season, the Titans Defense does not compare in talent.

Go with Fitzmagic who realistically could finish as the #1 Passing QB this week in Fantasy Football. Chan Gailey and Todd Bowles will make sure Fitzmagic wins the game for the Jets, BEAST DOME superstar Chris Ivory will get his in the process as well. 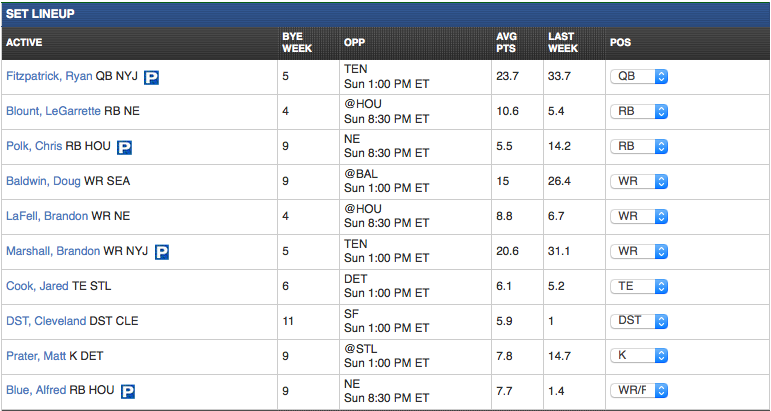 While NFFC does not allow pickups after Week 13, it is important to go with the QB/K Combo. How many times have you been thankful that you had Matt Prater in your lineup when Stafford was stopped short of the endzone. Randy Bullock is a great Kicker and was part of the BEAST DOME strategy last season with Arian Foster/Ryan Fitzpatrick “PLAN B.EAST”

Chris Polk will get a lot of action on Sunday Night Football and could easily be a Must-Add player with a TD. If you have the roster space, make the add.