I told everyone on Rotoworld Forums and all different Viral ways, to add Detroit Lions Backup RB Kevin Smith if you needed a ticket into the playoffs. There are some people on this website to this day because of that call.

He was owned in only 5% of Sportsline Leagues, it was the furthest thing from expected as Maurice Morris was the starter everyone owned/started.

That Sunday Kevin Smith blew up for 200+ Yards and 3 TDs. 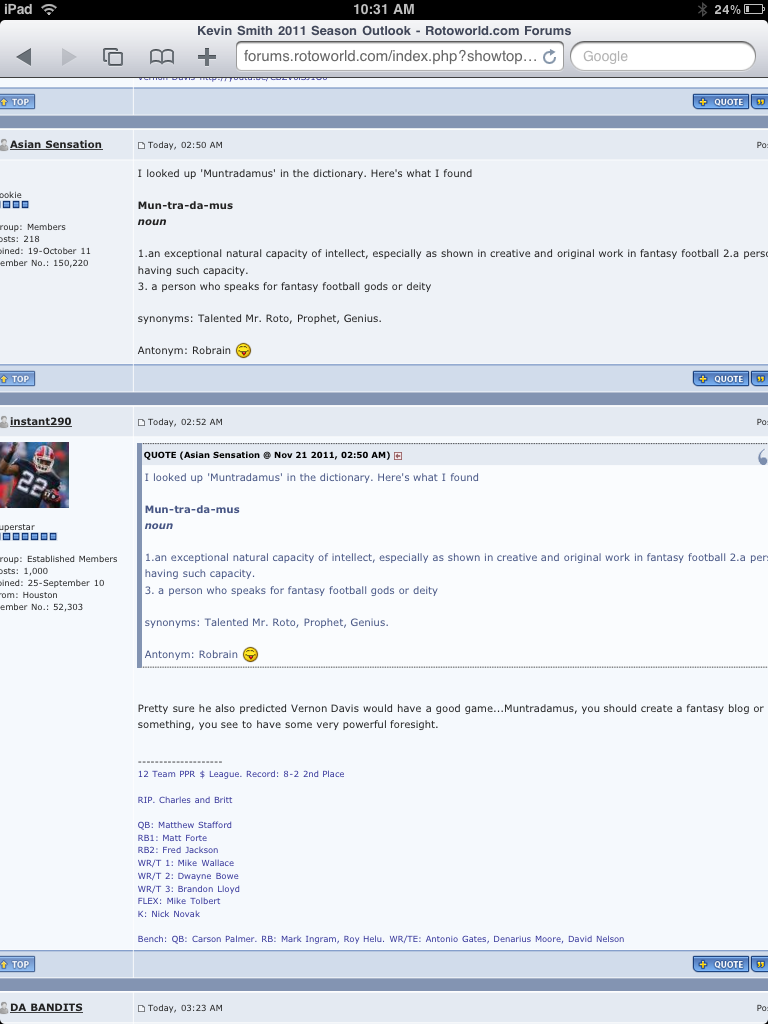 It bleed right into Basketball not skipping a beat.  It then went straight into Baseball. Not missing One Day.

Now we have made Full Circle, and this article I am going to Feature 3 RBs who I told you all to grab over the other popular choice this season.

These are players that can carry you into the Playoffs.  KAMIKAZE RBS.

KAMIKAZE RBS = Player That Will Get You Into The Playoffs.

*Then Likely be destroyed when the original Starter comes back.

When Cedric Benson went down.  Every website told you jump on Alex Green as if the Gold Mine of all Gold Mines just ended up on the Waiver Wire. *FANTASYPROS ARTICLE

BEAST DOME told you to go after James Starks.

While there is no doubt Alex Green has been the better RB to own up to this point, he likely hurt you more than helping as he failed to score a TD or rush for over 70 Yards as a starter.  He has no big play ability and averaged less than 3.0 YPC against the Jaguars of all teams.

While Starks does not have the best matchups.  He should start to see enough carries to the point where he could give you low-end RB#2 numbers with upside.  STARKS IS MUST-OWN.

Marcel Reece was always a player that I watched closely.  Even before the McFadden injury he was one of the featured players in my Week 9 Picks of the Week.

As soon as McFadden was injured, I told everyone to immediately add Reece over Goodson before the high-ankle sprain was reported.

When it was between Reece and Jones for Week 10.  I gave Reece a good sized cushion favoring him.

Now with McFadden injured missing a great matchup against the Saints, Marcel Reece can easily be your one-week savior.  As long as he gets 20 Touches against the Saints defense, good things can happen.  Keep in mind the Saints D is a bit improved with Jonathan Vilma back as the MLB.

*Darren McFadden’s injury is a 2-4 Week injury.  With Run DMC’s injury history, a 4 Week injury is possible. Reece offers RB#1 quality potential, but is more of a solid RB#2.

That is Michael Turner’s conversation rate from inside the 10 Yard Line scoring TDs.

JacQuizz is not a great RB. If he was half-way decent, he would have the job by now.  But he is good in space, and in this matchup the Falcons will be much more dangerous if JacQuizz is featured more than Turner.

Of course Turner can turn back the clock on the most random weeks, but chances are Quizz will start seeing more consistent touches.

JacQuizz is one of the cover boy sleepers for BEAST DOME.  His season is not over yet.

*Michael Turner has to start being more consistent if the Falcons are going to trust him full-time. Look for Quizz to start inching more and more into the starting role and Quietly move his way into Low-End RB#2 quality.