Everyone has their draft season coming up. If you do not have the BEAST DOME Draft Guide, then you simply already lost your league. No Fantasy Sports site does more research and spends more time on Preseason Football than BEAST DOME. You will see why below.

If you are part of Preseason BEAST, you have all my rankings and team by team breakdown of what they will do on offense. Last season I was one of the few experts who was a non-believer in JK Dobbins (LORD OF THE BUST). Heading into this season I was definitely not a believer.

There is no doubt that BEAST DOME had JK Dobbins ranked lower than any Fantasy Site prior to the injury. The truth is, Gus Edwards is a better RB than JK Dobbins ever was. I was so confident in Gus Edwards having a 1,000 Yard season that I went ahead and bought one of his most valuable National Treasures Cards.

Even though it is not his rookie season, it is his first and only National Treasures card making it very valuable. Easily made 4x the money on this card and the season has not even started. The Sportscard program comes included in Package 2 Preseason BEAST.

*PRIOR TO DOBBINS INJURY

Now with Dobbins injured, Gus Edwards is no longer a player you can steal after the 10th Round, he is a player that is being drafted in the early-mid rounds. Does his new ADP warrant the high selection? There is only one way to find out. *DRAFT GUIDE BELOW*

Gave time for “Experts” to change their Ranking.

Some “Experts” were touting JK Dobbins as a Top 10 RB! If you listened to any Fantasy site that promoted Dobbins, you put yourself in a bad position. 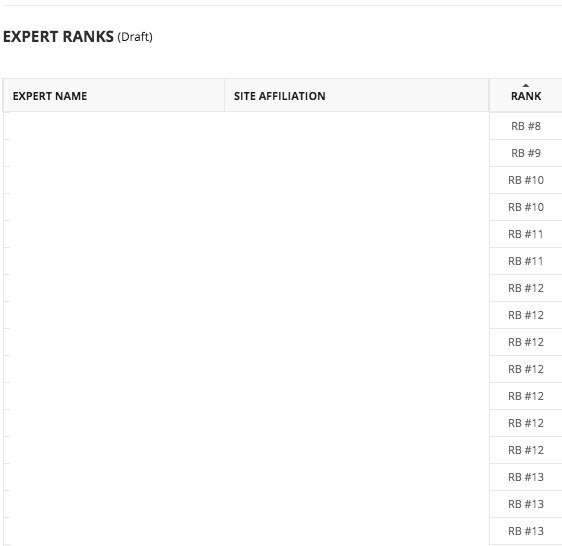 Either win your league or not.