Eddie Lacy has eaten all the candy in the Halloween bowl and now we have to decide if the tow truck BEAST has what it takes to BEAST the rest of the season.

Before we do that, let us recap what we have seen so far. Week 1 Lacy was typical Lacy running for 80+ yards and a TD. Everything seemed like it would be fine and we were going to get the 1st Round Pick we all thought we were going to get. Then Week 2 happened. On the first possession of the game, Lacy rolled his ankle so bad it seemed like he was going to have 2-3 Week injury. After only seeing 3 carries, James Starks ran the Packers to a victory against the Hawks rushing for 95 yards on 20 carries.

After Starks had his breakout game, Eddie Lacy decided to quickly return in Week 3 against the Chiefs. Starks saw 17 Carries, Lacy only saw 10 as Lacy clearly looked less than 100%. Lacy bounced back Week 4 with 18 Carries for 90 yards against the 49ers, which is not enough for the 1st round BEAST. Then Week 5 and Week 6 we saw James Starks clearly out play Lacy, including 112 Yards for Starks in Week 6 right before the Bye Week, on only 10 carries.

Now we come out of the Bye Week. The Packers offense is clearly struggling and not the dominant 30+ Point Per Game Packers offense of old. Eddie Lacy should be a lot healthier moving forward, but James Starks who has won a Superbowl for this team back in 2010 is looking like that RB. The Packers still want Lacy to be the guy, but he has to earn it. The way he has to earn it is performing. Let us look at the remaining schedule. 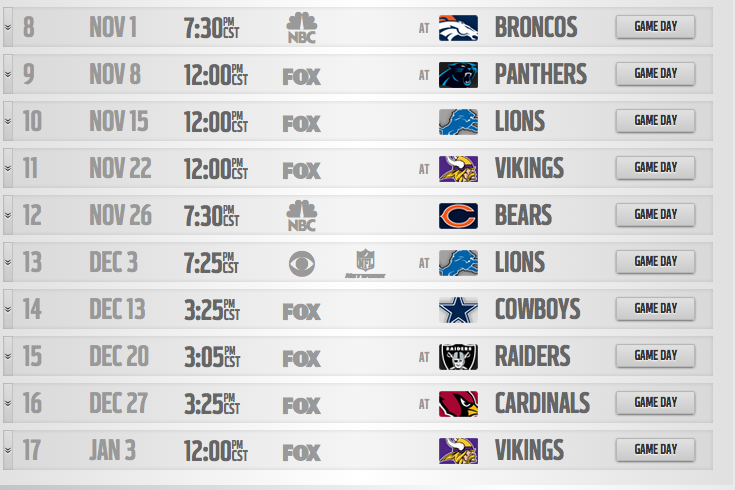 Week 8 and Week 9 have BUST games written all over it for Lacy. Week 10 against the Detroit Lions is the make or break game for Eddie Lacy. If he can BEAST that game, he should have enough momentum to roll through the rest of the season.

The Packers need Lacy to be Lacy to keep defenses modest against the pass instead of game planning to prevent Rodgers from beating them. Eddie Lacy should get his carries in the 15 range right away starting this week. It is up to Lacy to increase his production and those carries will get in the mid 20s. Lacy has to convert the 1st downs to get the extra carries and the extra plays for the Packers offense.

In the end, I feel Eddie Lacy ate too many treats and it appears his BEAST season is heading in the wrong direction. The Packers offense is not the same of the past without Jordy Nelson to stretch the field, and Eddie Lacy looks straight up fat and slow, while James Starks looks like he turned back the clock to 2010. The key is how Lacy responds with the extra week of rest from the ankle.

The difference between Eddie Lacy foot injury vs. CJ Anderson foot injury is that CJ did not turn his ankle so bad that it looked like he had a multi-week injury. CJ Anderson was just dealing with a toe injury. While Hillman is arguably better than James Starks on pure talent, Ronnie Hillman never carried this Broncos team through the playoffs like Starks did during the Packers 2010 Superbowl run.

NBA BEAST of the NIGHT continues on MONDAY