FANTASY FOOTBALL BEAST OF THE NIGHT

As we all traded for CJ Anderson last week for peanuts such as James Jones straight up. It is now time to place some action on a RB that is going through the same transition as CJ Anderson, ‘looking like a sharp RB coming out of the Bye.’ Only difference is Jonathan Stewart is now in game 3 from his bye Week, and his first two showed him going BEAST MODE rushing for a combined 200+ Yards, and 2 TDs (Both against Seattle).

The Carolina Panthers are playing great football right now and it all starts with Cam Newton keeping opposing defenses on their toes. The Colts are very small upfront and run a base 3-4, which will keep the linebackers more staying at home trying to contain up the middle, but not ready for the new gash of speed Jonathan Stewart has been displaying lately. With the Colts offense likely to go 3 and out more than usual now that we know Andrew Luck is playing with broken ribs and going up against arguably the best defense in the NFC. Chances are this is not going to be a pretty game for the offense as the Running game should be in stalemate with Frank Gore going up against that Panthers LB core.

11/2 MUNTRADAMUS PLAY OF THE DAY 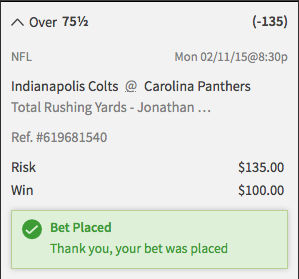