ATTACK OF THE SHEEP (DARRELL HENDERSON)

Committee, a word you never want to see associated with a RB you spend a draft pick on. If you see this word with an early draft pick, you really messed up.

Is it a surprise (rhetorical question) that the Sheep went all in on Darrell Henderson when Cam Akers went down, pushing Henderson as early as late 2nd Round RB. While I went the other way and said it was all hype and Henderson has zero part of the BEAST DOME Draft Strategy, and I was correct.

Two Weeks. That is how long it took for every Fantasy Website (outside of BEAST DOME) to look like a fool before the season even started. Henderson still does have a little bit of value as of today, only because he is the vet of a very young RB crew. Though the preseason can easily show us that one of these Rookies behind him is a better option. Not to mention the Rams can easily go to Free Agency and pick up a stud RB.

Darrell Henderson is a classic point and case how you will be light years ahead of your competition if you signup for the BEAST DOME Draft Package this year. You will avoid all the BUSTS. You will have a Draft Strategy where you will have a BEAST squad feeling amazing going into your Fantasy Football Season. 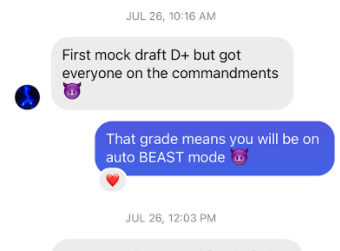