I stayed At A Hilton Last Night

Andrew Luck is definitely the #1 Fantasy QB of the Future. He is the debatable #1 of today, but when the generation QBs of Rodgers/Brady/Peyton/Brees retire, which is probably less than 5 years away, Andrew Luck will be the #1 QB by a long shot.

With that said, Andrew Luck has always been given a lot of presents in his young Colts Career. This year is no different as the Colts brought in Andre Johnson to replace Reggie Wayne, TY Hilton is a burner, Donte Moncrief is an underrated #3 WR, and their #1 Pick in the NFL Draft is a WR by Phillip Dorsett who has the body of a Greek God.

I did not even mention the TE combo of Dwayne Allen and Coby Fleener who both demand their fair share of targets. Now there is no doubt the Colts will be throwing the ball 35+ Times a game, but there is a doubt on who is going to be consistent in this offense besides Andre Johnson in the passing game. Here is why you should worry about TY Hilton. 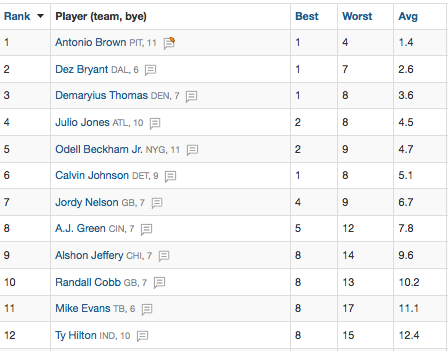 There are a few things off with this list presented by FantasyPros. Besides Odell Beckham Jr. (who now has James Jones added to the list) and an article coming later this week on another BEAST on the list above. TY Hilton is by far the worst advice of all the players on this list.

First let us look at how Hilton performed game-by-game in 2014. 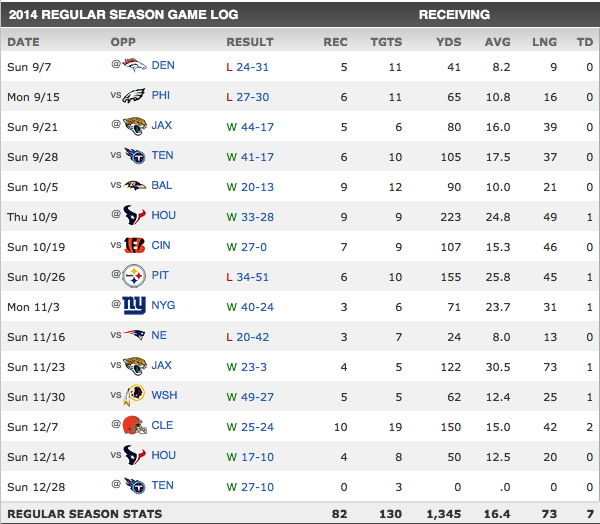 Reggie Wayne hurt his elbow on Week 7 against the Bengals

The interesting stat is that Hilton’s numbers did not increase that much in the yardage department when Reggie Wayne was injured. While Reggie did stay on the field, he was just a shadow of himself.

The most disturbing fact about TY Hilton is that he failed to reach 100+ Yards in 10 of his 16 Games.

While he did save his season in Week 14 against the Cleveland Browns with 150+ Yards and 2 TDs, Joe Haden was not guarding him. Even with a banged up Reggie Wayne in 2014, Hilton only had 6 Games of 10+ Targets.

All of this is very disturbing especially after I show you this. 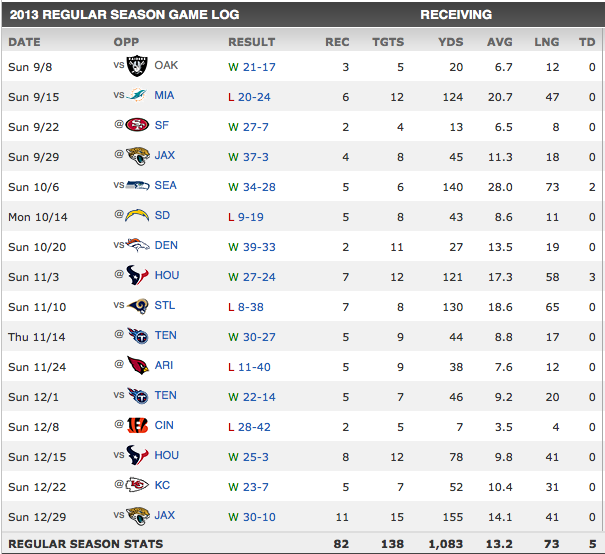 Reggie Wayne tore his ACL Week 7 against the Broncos.

Once again, TY Hilton failed to dominate when Reggie Wayne was injured in 2013. He only saw 10+ Targets in 5 games that season, and only recorded Touchdowns in 2 Games. The game against the Seahawks with 2 TDs is as flukey as it gets, and there is no way he was in anybodys lineup heading into that game as he still was not a Fantasy Factor.

The fact he did not score a TD in 8 of the 9 Games without Reggie Wayne in the lineup is a clear case that this guy is a HR TD or nothing. Not the type of player I like to draft or own on my Fantasy Football Team.

Andre Johnson is a much improved aging Reggie Wayne. Andre still has plenty left in the Tank at 34 Years Old as he combined for over 3,000 Yards in 2012-2013. Last season Fitzmagic and Andre were not on the same page often enough, and when Fitzmagic got injured, Andre Johnson coasted to under 1,000 Yards in 15 games to close out the season.

Regardless, this is a new time in Andre’s career. He is playing with the best QB he has ever played with in his NFL Career. The system in Indy has worked for the last few seasons making Andrew Luck a BEAST in the Fantasy Football community, and Andre Johnson will fit into the system like a Glove.

TY Hilton has a lot of competition for the #2/#3 spot. There is no doubt he will have the #2 Spot, but there is doubt if he is the #2 Target on a lot of pass plays. Like I mentioned above. Dwayne Allen/Coby Fleener need their targets. Moncrief has thrived with Luck when he gets his targets. Dorsett could be special.

All of this says that TY Hilton is going to be as BOOM or BUST as it gets. History shows that he is far often more BUST than BOOM, and the addition of Andre Johnson will only make that statement more true as we head into a new season. Not to mention that TY Hilton is the size of a tooth pick and one big shot and he is OUT.

There are plenty of other WRs you should Draft on Draft Day, as TY Hilton is my #31 WR in my Rankings.

See all of my Rankings and Analysis by signing up for a VIP Package Today. 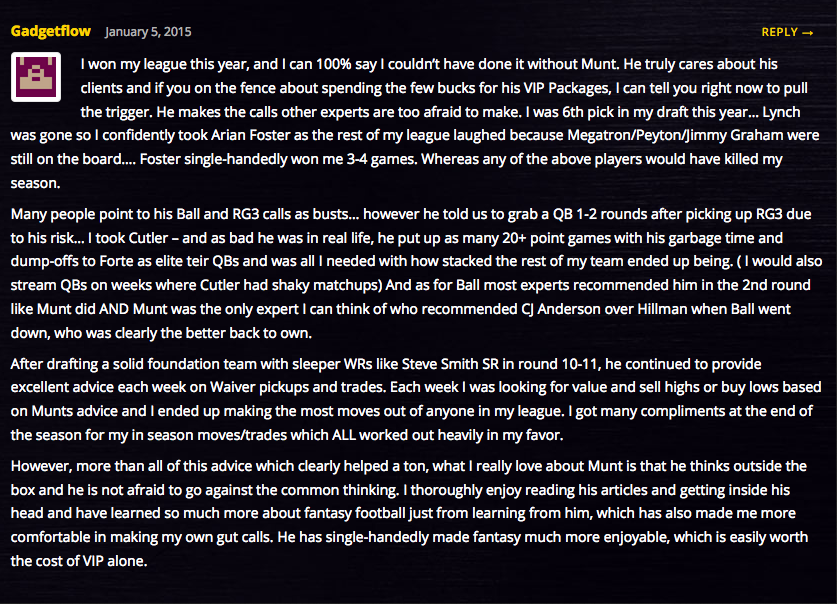