The IDP Ward Is In The House (TJ WARD)

While my FantasyPros Ranks for 2014 were nothing I expected. I was still recognized as the #4 IDP DB Expert of 2014. With that, let us celebrate by announcing my 2015 IDP DB BEAST. TJ WARD.

The Broncos have a very dynamic Defense behind Defensive Coordinator Wade Phillips. They have easily the two best blitzing LB’s in the NFL with Demarcus Ware and Von Miller. They have Aqib Talib who is arguably the #1 CB in the NFL, while Chris Harris Jr. may be one of the more underrated Corners in the game. With all the Blitzing, and man-to-man coverage. The Broncos often leave things wide open in the middle of the field, which means it is TJ Ward territory to make the tackles.

TJ Ward calculated over 100+ Total Tackles twice (only two seasons he played 16 games) with his time with the Cleveland Browns. His first season with the Broncos, not a lot of plays made its way to him as he combined for less than 80 Tackles in 2014. This year things are different. The most important thing that is different is the Broncos lost their star Defensive Tackle, Terrance Knighton to the Redskins. With the loss of Terrance Knighton, Running Backs will now be able to break to that 2nd level of defense without being met head on by a 320+ DT truck in the middle clogging the paint. With all the talent the Broncos have on their defenses, TJ Ward is really the guy to make sure no short yardage plays turn into 15+ Yard Gains.

In the past TJ has been known as one of the best cover SS in the NFL, often shutting down teams opposing TE’s, like it was nothing. This season TJ Ward will have to do a lot more in stopping the run because as good as Danny T. and the other Brandon Marshall may be, their job was a lot easier when the Running Back had enough trouble just breaking past that Defensive Line.

TJ Ward will not only go back to his vintage 100+ Tackles in 2015. He will rack up a few more INTs than he did in 2014 (2). He will also be in a position to record a lot more sacks as he plays way closer to the line of scrimmage than he did in 2014. With the loss of Terrance Knighton, TJ Ward is the Bronco that will step up the most in 2015. I have him Ranked as my #2 IDP DB. Other Fantasy Experts are afraid to see past his 2014 season, his first season adjusting to the Denver Broncos. 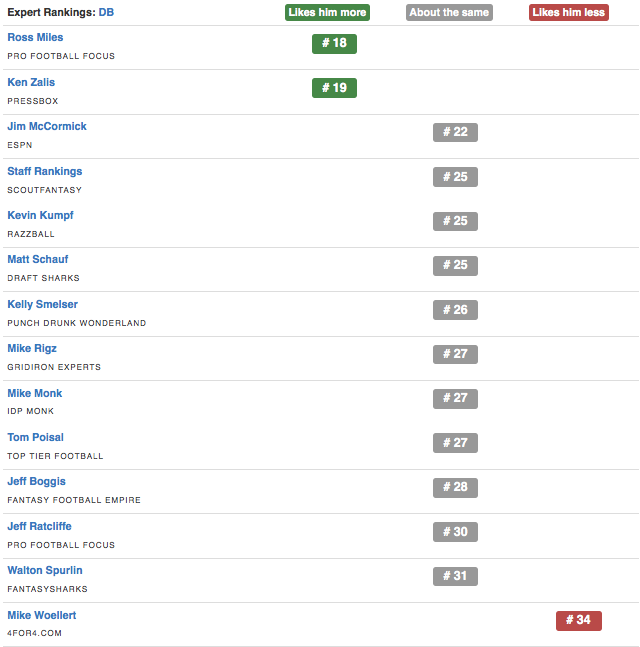 Get all my 2015 Rankings with Analysis. Signup for a VIP Package Today.