It is important to make big moves down the stretch to win your leagues. Here is the story of my Fantasy Basketball Season as we head down the home stretch.

Best Draft Picks had to be

Jrue had a career year with no Tyreke Evans or Eric Gordon no longer in his way. Jrue was the last man standing in the Alvin Gentry system and his game was Superstar like all year, even before Cousins went down.

Grabbing Tobias Harris in Round 7 was vital. He turned into a 3PT shooting machine who really evolved in the Clippers system. Funny because Blake Griffin who the cover man of BEAST DOME was the player playing in that role this season, which led to a career HIGH in 3PT and Assists for BG.

Tim Hardaway J was a HUGE pick as well. When Porzingis went down, THJ Jr turned into a 3PT shooting machine and would score around 20 every single night. He can make it drain, and he did that this year.

Rondo was Jason Kidd on steroids this year. While he did not get that many 3×2, he single handily carried the squad in assists especially down the stretch of the season. 17 Assists last night heading to the Championship week is HUGE!

Even CBS gave love for this pick as one of the best picks of the draft. I was in love with Dunn all year and was planning him as a last round steal because of the injury that held him out to start the year.

Here was the team after the first week of the NBA Season. 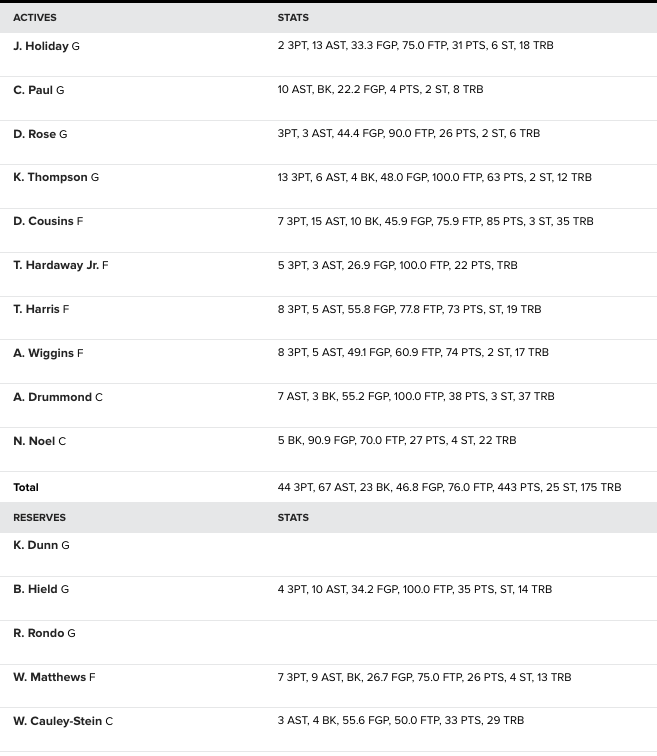 Season started strong. Great draft, DeMarcus Cousins was a BEAST and the 1st Round Pick.

Moves were made on the Wire, Lauri Markk being the best of all the moves, but Cousins carried us to 1st Place on his shoulders.

Then Achillies Injury to Cousins happened, which sparked us to do this trade. Losing our 1st Round Pick Cousins and 2nd Round Pick CP3 in the same week.

Trade worked out in our favor, but losing those 3PT shots from Cousins at the Center Position was HUGE. CP3 also gets you a lot more 3s than Elfrid Payton which had us fall to 3rd Place.

With two weeks left in the season, I grabbed Anthony Tolliver who knocked down 15 3PTM last week

This week to close it out, MarShon Brooks who is the perfect example of to never give up and keep Balling is THEE man for the Grizz right now and could make a great sleeper next season pending on what the Grizz do. The other big move is Kyle O’Quinn who may not be playing any defense, but he will get you blocks and assists. Do not forget the steals. 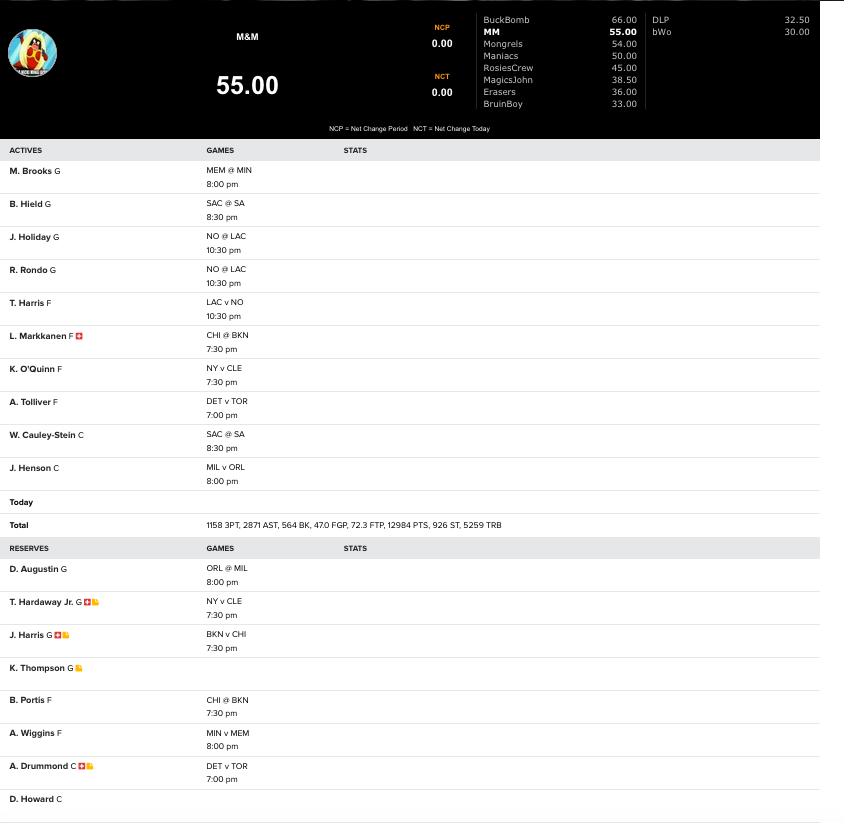 It is important to maximize games played in Basketball in a week as oppose to other sports. That is why Klay Thompson and Dwight Howard are on the bench to close out the year. I need the blocks and rely on a Waiver Wire add from before Monroe in John Henson to get it done.

It is funny because the cover athlete this year for BEAST DOME Fantasy Basketball was Blake Griffin, who ended up with a career year in Assists and 3PTM! He also knocked down nearly 80% of his FTs, something that he has struggled with his entire career. Injuries did limit his season again, but injuries are part of the game. When Blake is healthy, Blake was a BEAST!

When his season went down, Anthony Tolliver ended up being the BEAST that took over. It’s all about the journey and to continue to trust the Process.

Being in LA and one of the other owners a big Clippers Fan, and he knows about BEAST DOME. BG was selected before me in the 1st Round. CP3 was who we ended up with, and he turned into Dwight Howard who saved us and kept us floating in 1st Place in Rebounds.

Though a Championship is not going to happen like it did last year (LAST YEAR RESULTS FOR M&M) It was still a great Basketball Season and have grown to be a Better Fantasy Sports Expert than I ever have because of it.