All games are Free the First Week and you can win DFS Tokens multiple ways! Hit a HR win Tokens!

I will also be calling all the action LIVE at 4pm PST.

Ryu was one of my Waiver Claims from Week 2 when he was supposed to be a two-star starter. Because of scheduling conflicts, Ryu finally gets his two start week. Many pitchers this year have had great games against San Diego and after watching Ryu dominate Oakland with 6 INN/1 Hit/8 Ks. I am convinced Ryu will be nice against San Diego.

After that start Ryu faces Washington, if he can figure out how to limit Bryce Harper and the front of that Nationals lineup, Ryu can come out with a nice start. Nationals are never an easy team to slow down, but at least the game is in LA. Roll with Ryu.

Guerra needs to emerge as a pitcher the Brewers can rely on if they want to win the NL Central. In fact, all of their pitchers need to emerge. Guerra looked good enough in his first start on the road against the Cardinals, to roll him out with two home starts against non playoff teams.

First he plays the Reds, a team that has yet to really get going. Injuries and a slow start for Joey Votto in the power department is hurting this team early. Guerra can make something happen. After that he faces the Marlins, a team that is really filled with AAA players and Starlin Castro.

If Guerra does his thing, two easy wins can be there.

The Angels are naming their closer multiple times a month. From Cam with the early lead, to Parker who had a quick hook. Kenyan MIddleton is the new flavor. Will it last? Too early to say as he has been clutch so far with an ERA at 0.93. However his strikeout pitcher is not dominant and the Angels are not a patient team.

With that being said, Angels are winning games and you might as well ride Middleton if you need saves. 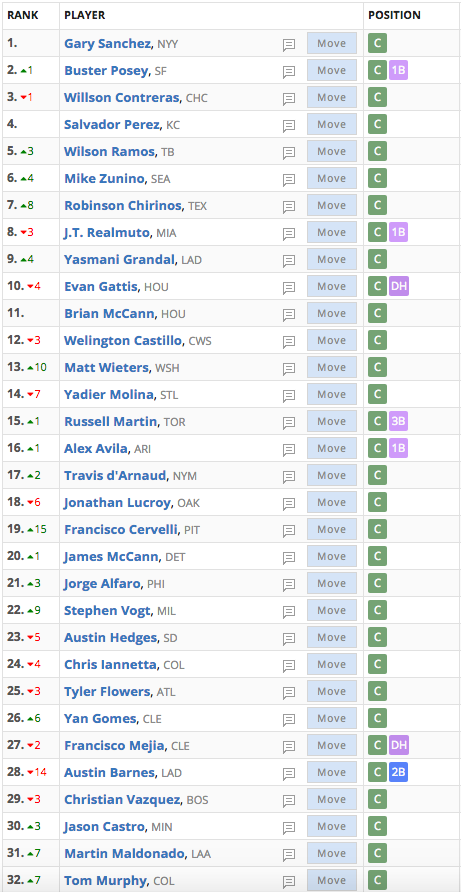 Injuries have already started to take their toll at the catcher position. Luckily there are two catchers who you can grab who I ranked above all the Experts by a mile.

One of them is Francisco Cervelli who is finding himself batting 6th with a stacked Pirates squad in front of him. He always has runners on base and is the co-leader in RBIs within the catcher community. He can easily hit 80 when it is all said and done.

Wieters went on the DL really early in the year, only to comeback with no soreness in his ribs and hit a HR within a few days. Wieters is a naturally born hitter, and the Nationals would love to see him healthy and hitting. Right now that is the case and Wieters has all the ability in the world to end up with 20 HRs.

The guy that has led the MLB in HRs twice in the last 5 years, is now owned in less than 50% of CBS leagues. Yes the guy is struggling early as his batting average is sitting near .150.  However keep in mind.

Chris Davis is a streaky hitter. When CD19 gets going, nobody can CRUSH the ball like this guy. Fastball down the middle, forget about it. The weather has been cold in a lot of their games, and the Orioles wasted his 1st week of the season batting him leadoff. A spot in the order that does them no good. Best situation for Davis is to get back to that #3 spot in the order. Once he starts hitting, it will happen.

Crush has two multi hit games since Thursday going into Sunday. He is starting to get going little by little.

Owned in less than 25% of CBS leagues, Mauer should be owned in a lot more. Hitting around .400 is historic! While the power is not there, it could surprise big time when the weather starts to heat up and the Twins are not playing in Snow weather.

Mauer is hitting #2 for the Twins all year surrounded by All-Stars in Dozier and Sano. Lots of opportunities from an up and coming Twins team.

Villar was my guy this preseason!

The guy hit his 1st HR of the season on Saturday, and he has been hitting around .300 all year. On top of that his speed was relevant to start with 2 early SBs. Despite all this, Villar is owned in less than 60% of leagues.

I guarantee that number will get to 100!

The fear for Villar was that he was going to lose PT to Sogard or Hernan Perez. Only PT he has lost this year so far was to lefties for Hernan Perez. While it does seem like not the best situation, it is not the end of the world since it is extremely hard to steal off of lefties. On top of that he always finds his way to a pinch hit situation later in the game and sometimes stays in.

Villar is finding his groove and could put up big numbers despite batting 6th or 7th.

Peraza is the real deal when it comes to speed. He has the potential to steal 40+, but his number is likely closer to 30. Most important of all for Peraza, he qualifies at 2B/SS.

Peraza is batting 2nd behind Billy the 6 year old kid Hamilton. While hitting 2nd is not ideal for speed, there are always opportunities to run. Whenever Hamilton is not on the basepaths which has been a lot this year, Peraza has the green light. Great guy to get for depth with good speed and is owned in less than 35% of CBS leagues.

Dodgers need an answer on offense and it really comes down to Matt Kemp finding his swing.

While Bellinger has yet to get going, and Justin Turner will return in May. The Dodgers will have a stacked lineup at some point, and when the team starts hitting, it will be contagious. The Dodgers are going to find their groove and Matt Kemp should easily glide to a 25+ HR season.

The Rays are likely not going anywhere once again. However they did find a nice guy in Carlos Gomez who can not only hit 20+ HRs, especially in those AL East Ball Parks. He can also steal bases. The Rays are hitting the ball well enough as a team where the #3 Hitter Gomez is finding himself with some nice Runs and the occasional RBIs.

The Rays will be hitting all year, Carlos Gomez will get his results.

Last week I said to add Pedro Alvarez as he is owned in 1% of CBS leagues as a guy who can hit 30+ HRs. The Orioles continue to play him when they face Right Handed Pitchers.

Mark Trumbo will return and play likely a lot of DH. Which means Alvarez will have to find places to play in the field.

We dove into the fact he is not a great defensive player last week, but we do know he played great OF in AAA last year with a Fielding percentage over 90%.

Regardless if Pedro continues to hit around .300, Orioles will continue to play Pedro. They even batted him #2 on Saturday.