So you decided not to do the MLB Draft Strategy. You decided that your knowledge was good enough to win your league and you did not need an outside Expert who dedicates his life to making sure you have the winning formula. Regardless of where you are in the Standings, this is where you could have been.

Not only is Didi the best SS in Fantasy Baseball right now, he ranks #1 overall for all hitters on CBS. Even beating out Mike Trout. Story is getting it going as well after a slow start, 5 SBs on the season already! 30+ HR/20+ SB seems to be in the cards for sure.

Nobody has Yasmani Ranked higher as well as Francisco Cervelli, the two best values at catcher this season. Chirinos (5 HR) and Zunino (4 HR) will make their way up on this list as their HR strokes are starting to come through lots of baseball.

The catcher strategy all along was to take Sanchez #1, despite the slow start he still had 2 multi HR games in April, and is top at HR/RBI/Runs.

While Chris Davis has yet to get it going, even though he is starting to heat up a bit both Joey Gallo and Hanley Ramirez has been crushing it! Eric Thames has been having a good year as well, too bad he is going down with thumb surgery. 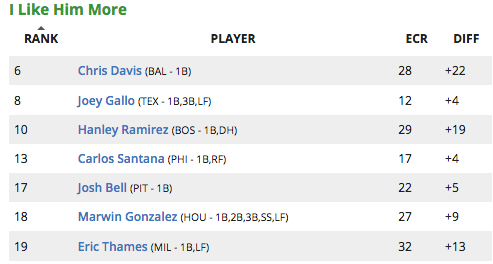 Jose currently ranks as the #11 2B option on CBS, Merrifield/Gennett/Nunez all having bust years as well.

Moustakas & Gallo are two of the top 5 3B options on CBS. Longoria has 5 Bombs putting him on pace for a potential 30. Miguel Sano will get the power stroke going, the strategy called for Gallo here.

Every single one of these players, minus Kipnis who doesnt qualify at OF is having a respectable start. Polanco + Marte were part of the BD Draft Strategy and even Leonys Martin at the bottom of the list is killing it. He is one of the first guys I wrote about this season. 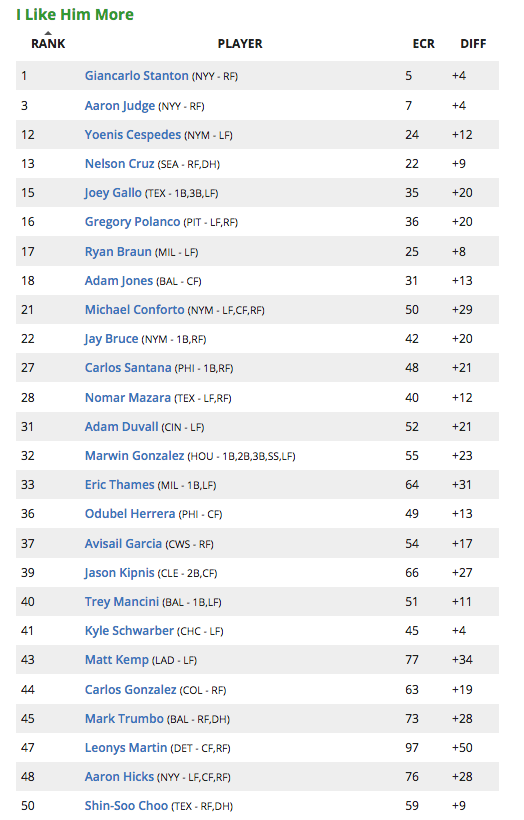 Cole has been a Top 5 pitcher through the first month of the season. He was someone I wrote about last Spring as a player who is going to be a stud, and he is now a STUD.

Familia ranks #3 in saves with 9. He does have 3 Blown Saves which would have left Familia with the most saves. Still his ERA remains under 2.00 making him a BEAST.