Fantasy Baseball is a journey to say the least.  A season that starts in April and ends in September.  You can be in first place for the first 4 months, only to see your team crumble in the end.  I am here to stop that and make sure you win it all.

I am so confident I offer a guarantee in my BEAST WARRIOR PLAYOFF PACKAGE. 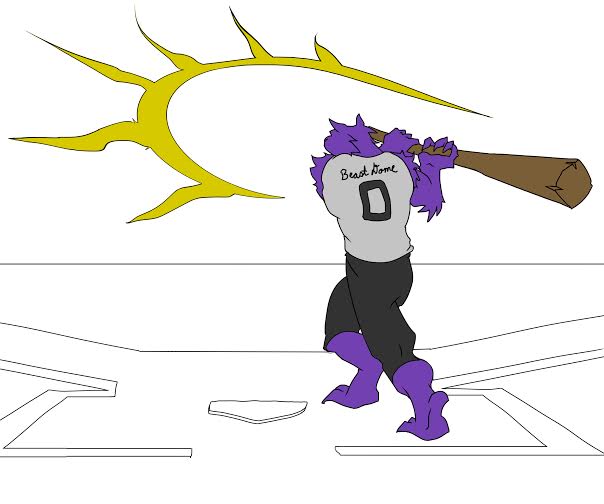 One of my Preseason Baseball BEAST VIPs reached out to me.  1st Place with a 12-2 Record.

Any BEAST DOME baseball VIP will know right away that this is a BEAST DOME preseason Fantasy Baseball Team.

*WANTED TEAM NAME AND LEAGUE NAME TO BE HIDDEN* 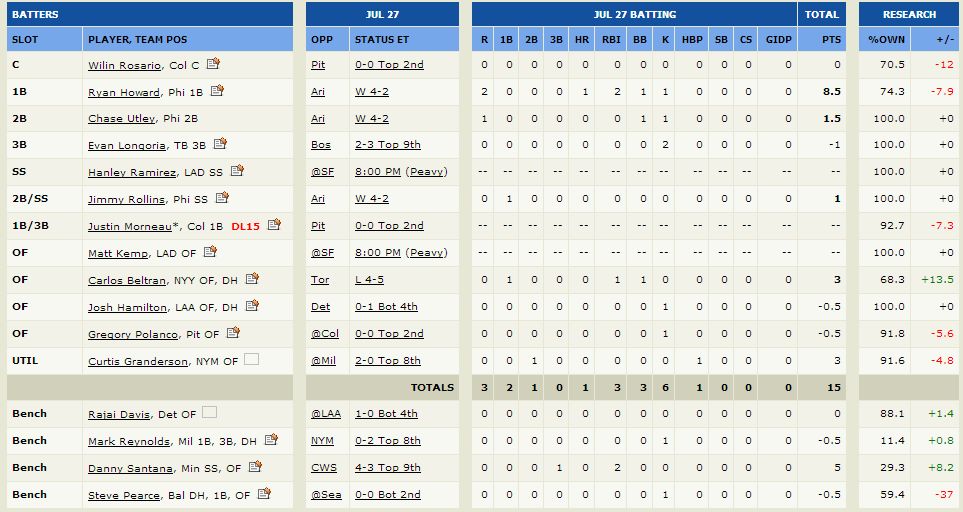 As soon as I saw this team I grinned.  This is exactly what the BEAST DOME preseason Baseball guide preached.

Despite the BUST seasons so far from Kemp/Hamilton/Beltran/Hanley/Howard/Utley, Ben was in 1st Pace.

His pitching staff of players from the Muntradamus All-Star Team saved him.  See link below.

Right away I knew it was gametime as this team was not championship worthy.  I made my moves on offense.

Told him add/start J.P. Arencibia for the popular Wilin Rosario.

Take out the Ice Cold Josh Hamilton for Mark Reynolds.

Put Morneau on the bench despite his Tuesday return for Juan Francisco. 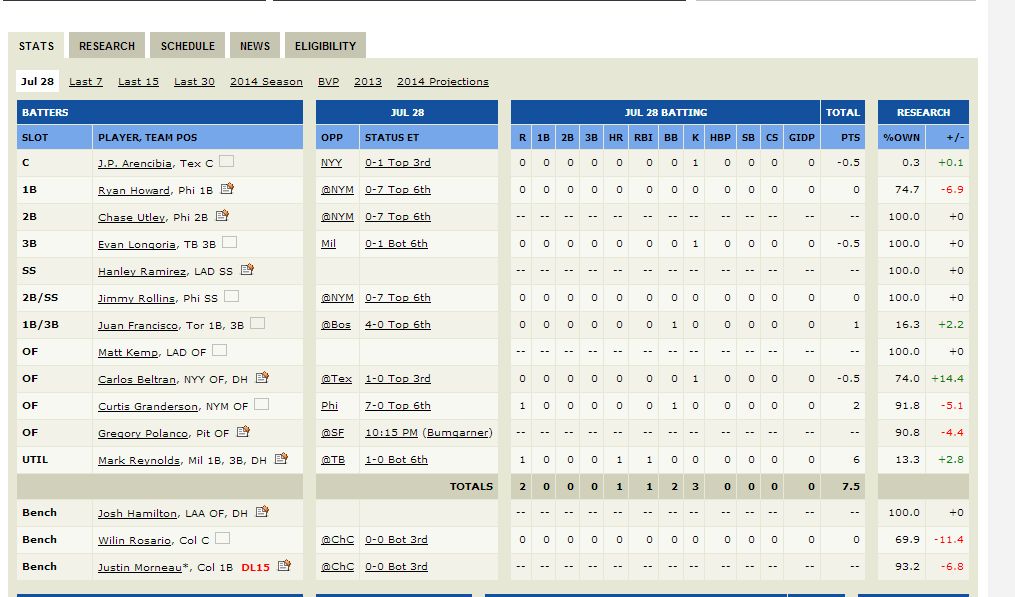 After 1 Day  these Three players were his MVPs as they combined for: 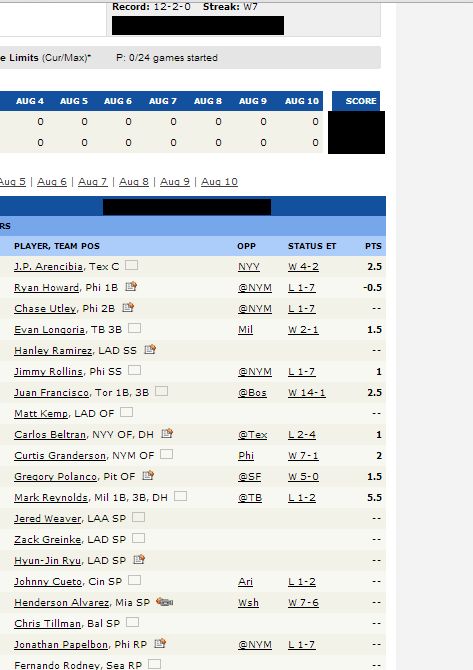 2012
About a year and a half ago I stumbled onto the Beastdome website while researching fantasy football. I read one of Munt’s mid-season trade articles, made the suggested trade*, and won my championship.  Simple as that.
*The article instructed ALL to acquire the then slumping Andre Johnson.  True to Munt’s prediction, Andre went OFF during the second half of the season in what was probably the best 6 game run of his hall of fame career.  Immediately, I knew that I had found a true expert.
2013
Last year was the first time I used Beastdome pre-draft.  I ended up coming in 2nd place, a mere 10 points away from winning back-2-back championships.  Munt’s research had me draft players like D-Jax (career year), Julius Thomas (ultimate breakout), Anquan Boldin (fountain of youth year) to name just a few.
2014
Success breeds success and the edge Beastdome provides inspired me to join a veteran fantasy baseball league this season. The guys in this league have been playing for 15+ years. Myself…just once about two years ago. Although I watch baseball, I certainly do not have the knowledge required to win a fantasy baseball league, especially when it comes to drafting.  So, I reached out to Munt and secured his preseason draft kit.  14 weeks later my team is 12-2 and earned a bye into the finals round.
I truly owe my 12-2 record to Munt’s countless hours of preparation and research. His preseason advice helped me nab Cueto, Greinke, Ryu, Morneau, and Utley to name just a few.
Now that I am in the finals round, I realize that it’s time to take it to the next level and WIN this league. Baseball is simply too streaky a sport to leave to chance. Once again, I reached out to Munt, and we quickly worked out a Playoff VIP package.  Within hours, Munt has suggested several interesting moves backed by insight and reason.  I am certain this edge will give me the best opportunity to lay claim to the TITLE. 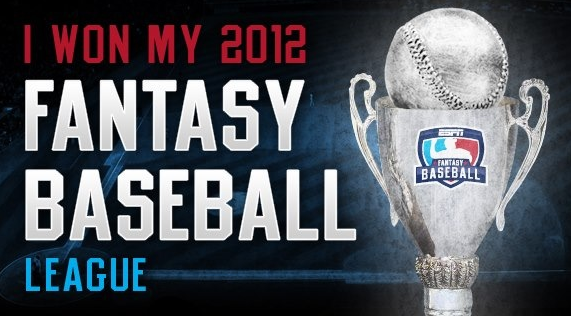 MUNTZ – I WANTED TO GIVE YOU AND YOUR VIP PROGRAM A HUGE SHOUT OUT. EVERYONE KNOWS HOW AMAZING YOU AND THE BEAST DOME WEBSITE ARE BUT YOUR VIP PROGRAM MAKES YOUR SITE STAND OUT OVER THE REST. OVER THE PAST FEW WEEKS, YOU HAVE TAKEN MY FANTASY FOOTBALL AND BASEBALL TEAMS TO THE NEXT LEVEL.

AS IT STANDS NOW, MY FOOTBALL TEAM IS 3 – 1 AND I AM TIED FOR FIRST IN MY DIVISION. NOT ONLY DID I FOLLOW YOUR DRAFT STRATEGY TO DRAFT A GREAT TEAM BUT YOUR WEEKLY VIP GUIDANCE IS TAKING MY TEAM TO THE NEXT LEVEL. THE FACT THAT YOUR VIP SERVICE INCLUDES REVIEWING MY TEAM AND GIVING THE TOP FREE AGENT RECOMMENDATIONS IS AMAZING. YOU CAN’T BEAT THAT! I CAN’T WAIT FOR THE REST OF THE YEAR.

AS YOU KNOW, I JUST WON THE CHAMPIONSHIP IN MY BASEBALL LEAGUE. I MADE SOME WRONG MOVES EARLY IN THE WEEK AND FOUND MYSELF 100 POINTS DOWN BY WEDNESDAY. I ASKED YOU FOR A LITTLE ADVICE AND YOU GAVE ME THE WORLD. I CAN’T BELIEVE YOU LOOKED AT MY TEAM/LEAGUE ON A DAILY BASIS AND RECOMMENDED THE HITTERS AND PITCHERS I SHOULD PICKUP/START. YOU COMPLETELY TURNED MY TEAM AROUND IN FIVE DAYS.  I DON’T BELIEVE IT MYSELF, WITHIN FIVE DAYS YOU HELPED ME GAIN 180 POINTS ON THE COMPETITION!!!

LASTLY, THANKS FOR THE BETTING ADVICE YOU RECENTLY GAVE ME WHILE IN LAS VEGAS. YOUR NFL PARLAY OPTION THAT YOU SENT ME EARNED ME A QUICK $100. I USUALLY DON’T BET ON SPORTS BUT YOU MADE IT SO EASY AND PROFITABLE. JUST SAYING….THIS MIGHT BE A GOOD SERVICE TO THE REST OF THE BEAST DOME NATION!

HANDS DOWN, YOUR VIP SERVICE STANDS OUT AMONGST THE COMPETITION. MOST FANTASY PAY SERVICES GET YOU ACCESS TO ONLINE TOOLS, CHARTS, GRAPHS, ETC… YOUR VIP SERVICE GET THE BEAST DOME MEMBERS ACCESS TO YOU! YOU CAN NOT FIND A BETTER DEAL ANYWHERE. THANKS SO MUCH FOR EVERYTHING. I CAN’T WAIT TO SEE HOW MANY CHAMPIONSHIPS I CAN WIN!!!