Week 1 we have a BEAST DOME home opener. Rob Gronkowski is on just about everyone BEAST MVP’s team. He is the cornerstone of the Draft Guide and was well worth the late 1st Round Pick that all sheep would just laugh at. No! DRAFT GURLEY says the clown.

Another cornerstone of the BEAST DOME DRAFT GUIDE this year is Tom Brady. Brady is on just about everyone’s team, if they do not have Brady they have another Superstar + Gronk. 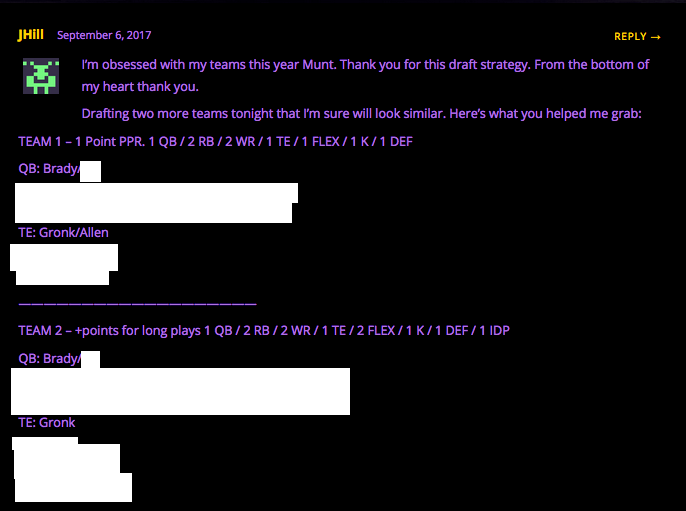 So while all the sheep say wait on your QB.. Gronk is NOT a MUST DRAFT.. joke is on you. All that will be on full display in about 24 Hours.

The New England Patriots is about to put up a Historic Season that is on tap to another level. We have seen Chip Kelly run his Oregon No Huddle in the offense to the ground. This New England No Huddle is faster than anything you have ever seen. In fact as long as you have been reading this article, the Patriots have already drove the length of the field for a Touchdown.

The Kansas City Chiefs..Like they have any chance at stopping the Patriots on ring night? Who are you kidding. This game is going to be comparable to pee-wee football vs The Super Bowl Champions.

The Chiefs have no offensive talent outside of Travis Kelce. The two biggest Sheep plays of the year, Tyreke Hill and Kareem Hunt are as basic as it gets. Both were as high as 3rd Round Picks in just about every fantasy league. Round 5 very latest for both, which is still way too early.

Tyreke Hill has speed, but Malcolm Butler and Stephon Gillmore will just push him into the ground the second he tries to release.

Kareem Hunt is the Allen Iverson of the NFL. Listed at 5’11/201. Kareem Hunt is more like 5’8/175 MAX. David Harris and Dont’a Hightower are going to drive him into the ground so hard you are going to be grateful you are not a NFL Player.

Travis Kelce will be nice in garbage time. In fact, Tyreke might just get decent numbers because of those quick screens when the game is over as well.

On the flip side.

Tom Brady has already scored 4 Touchdowns since you started reading this article.

That is the type of season this New England Offense is going to be. Their secondary is filled with Pro Bowl Talent.

For those who say, what about the KC Pass Rush. Ya see what happens when you leave one of those RBs in space with the quick pass. The aggressive pass rush will allow Brady to put up Monster numbers throwing the ball less than 5 yards and watching Dion Lewis/James White or whoever they have back there taking the ball another 35 yards after the catch. Or how about Gronk 1 on 1.

What makes Gronk so beautiful besides being a monstorous BEAST, is his ability to be unguardable 1 on 1. If he has the ball in space 1 on 1, he will break that tackle and be a Robo Gronk running down the field that is too big to take down.

Going to be a historic season for Gronk as the consistent #1 option for Brady, in a historic Patriots season.