SILENCE OF THE GRAHAM

So far TEAM BEAST DOME has been everything short of BEAST. Outside of Brandon Marshall, this team has been dealing with injuries and play that is below average for many stars. One start in paticuliar is Jimmy Graham.

While many say Jimmy Graham was a Horrible Pick and you should have used that pick on either a RB or WR in Round 2, let us take a look of all the Round 2/Round 3 Picks.

*NOTE 12th Pick gets 1st Pick in the 3rd Round of NFFC Primetime leagues. 3rd Round Reversal*

Obviously Jamaal Charles is a player who never goes in the 2nd round of Fantasy Football Drafts. He has been great so far this season and I will admit he is the one BUST pick I was wrong about so far in this young season. Looking at the other picks outside of Randall Cobb, the 2nd Round is filled with BUSTS. Jordan Matthews had a great Week 1 and saved Week 2 in garbage time. AJ Green has had one HUGE game, and a lot of average games to go along with it. CJ Anderson/DeMarco Murray/Jeremy Hill/Justin Forsett have not shown consistency. Andrew Luck is a shade of his vintage self and who knows how this shoulder injury will effect the rest of his season. Then you have two WRs in T.Y. Hilton and Brandin Cooks who have yet to have over 100 Yards in a game, or a TD.

Then we get to Jimmy Graham. There is no doubt Graham has been a BUST so far this season. He is the #10 TE in PPR leagues and for the 2nd time in 4 weeks, Graham killed all of his owners on a HUGE stage on MNF. Now that we have seen the good and the bad of Graham multiple times as he also has two different games with a TD, it is time to really ask ourselves, is Graham the problem?

The answer is no.

The problem is Russell Wilson at this point. There are plenty of times where Graham is wide open for a 4 yard pass. Yes it may only be a 6-8 yard gain when defenses collapse on him after the catch, but the short routes Jimmy Graham are running are open. However Russell Wilson wants a bigger play. Russell will try to juke away from a player in his grill as he stands in the pocket to buy more time to find a weapon down field. By the time he jukes away from that player, there is another player in his face.

IF Wilson jukes away from that 2nd player, he will look down field for the big play instead of taking the original 4-6 yard pass for Graham. IF Wilson does not juke away, he is sacked and that creates a 2nd or 3rd and long, which makes Jimmy Graham another distant option in the passing game as Wilson tries to make another big play down the field.

So far the Seahawks have been getting away with it winning two games in a row against two of the worst football teams by record in the Bears and Lions. Now Russell has a matchup against a real defense in the Bengals, on the road without Marshawn Lynch. If Russell Wilson decides not to take the first option in Jimmy Graham early and often, the Seahawks will be punting all Sunday. This should be the week we finally see Jimmy Graham get that 10 catch game. Even though the 2nd Round is filled with Busts, Graham at TE has a chance to shine at a shallow position while a couple WRs on that list are being outscored by Doug Baldwin in Points Per Game.

While the Seahawks offense has been the downfall to TEAM BEAST. There is still plenty of time for the Hawks to turn it around, and Marshawn Lynch watching the last game in the Press Box could help the rest of his season as he now has perspective on how the Offensive Line is blocking, and gets another Week to analyze the action.

With an 0-4 Record, total points is the name of the game as I make a comeback into the Top 3. The season is still young enough where there is plenty of time to recover. With Arian Foster back and Matt Stafford approaching his cupcake Dome Schedule, I really just need the Seattle Bros in Marshawn Lynch and Jimmy Graham to live up to their hype. I do want to note that this Draft happened a few days before the start of the season. Many VIP teams are crushing it this season in Total Points and many are very confident with their squad heading forward.

With Brandon Marshall on Bye and Marshawn Lynch injured. This is the only roster decision I have to make this week. While many could say Russell Wilson will need to carry his Seahawks on his shoulders this week, I do not say that guarantees a big fantasy day as the Hawks will just look to kill clock and keep this game close for their defense to win. Russell is facing a tough pass rush on the road, and he panics like a 12 year old girl who missed an episode of Hannah Montana in the Pocket.

Matt Stafford and the Lions were a yard away from winning game #1 last week. Look for them to make a lot of noise in what many would consider a tough matchup against the Arizona Cardinals, in Detroit. Despite being in a different Division, Stafford has faced the Cardinals 3 years straight, and this Sunday will make it four. The most Fantasy Points he has put up against them is 19 points back in 2013, and there is good reason we will see the best performance from Stafford yet this season.

2. Megatron is angry after last week. After blowing the game winning TD, you can guarantee Megatron and Stafford will make sure they hook up multiple times throughout the game. Megatron was finally getting some deep balls from Staff, but the timing appeared to be a little off as that was the first time they really launched the ball all season.

3. The Lions really need a big game. While that does not guarantee Fantasy Numbers, you can know going into this game that the Lions need this win and Stafford will be in the zone from snap 1 to bring that W to the Lions. Nick Foles was able to throw for 3 TDs last week against the Cardinals in Arizona, so to think that Stafford will not be able to take advantage of similar situations is not out of this world thinking. The Lions are in danger of falling to 0-5, and a win like this will carry them through their upcoming cupcake schedule. 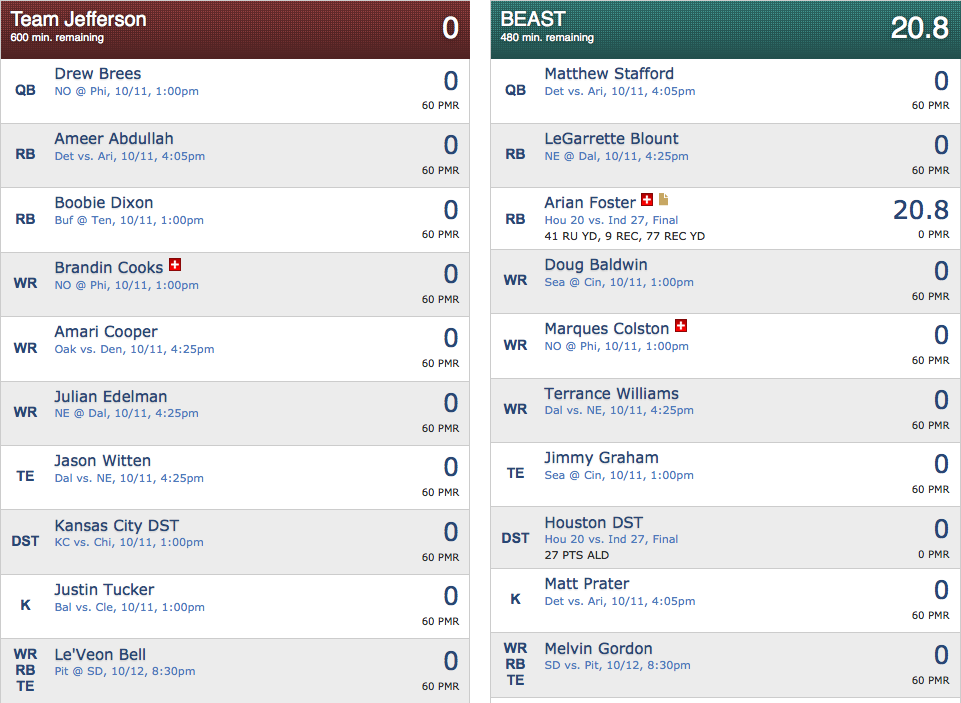 The Texans D/ST has put me in a minor hole early on. Losing a lot of faith in this team who failed to record a sack against the statue Matt Hasselbeck. While it may be time to throw the towel on them, I am forced to ride out the upcoming matchups of the Jaguars/Dolphins/Titans because those three matchups are the reason you draft a team like the Texans in the first place. Clowney and Watt did not get to the QB all night, and it is definitely a concerning moment in their season on the defensive side of the ball.

As far as Arian Foster goes, life looks very good with him moving forward, especially with Brian Hoyer at QB who should have been QB all along. While my WR corpse looks terrible with no Brandon Marshall in the lineup, no the WR corpse just does not look good and I am rolling with #3/#4 WRs as James Jones name being called on Draft Day along with Steve Smith Sr. continue to give me nightmares.

If Jimmy Graham can show off that 2nd round value this week, and Terrance Williams outscores Jason Witten along with Melvin Gordon and LeGarrette Blount remaining competitive with Le’Veon Bell and Julian Edelman. It may all come down to Brandin Cooks vs. Marques Colston. Then again, all I care about is Total Points, at this Point.