No better coaching strategy in the world than to tell your QB at halftime if he throws another Interception he will be benched. 3 pass attempts in the 2nd half, Stafford threw an INT and we all had to watch Dan Orlovsky throw the ball 37 times during garbage time. That was the perfect time for Stafford to gain some confidence and put up some numbers against a prevent defense. Stafford was looking nice before the benching throwing for over 100 Yards and a TD in the 1st Quarter alone. Things spiraled out of control in that game with a lot of turnovers, and like the Detroit Lions. TEAM BEAST DOME fall to 0-5. 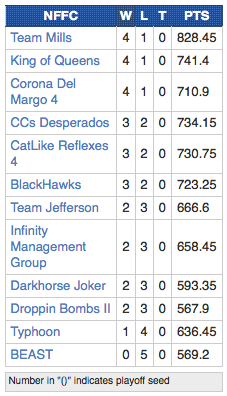 I have a long way to the top if I want to Rock-N-Roll. There is still plenty of time to close the gap from me and 3rd place in Total Points. It is not going to be easy, but for the first time my team is almost 100% Healthy, and I am ready for the comeback. 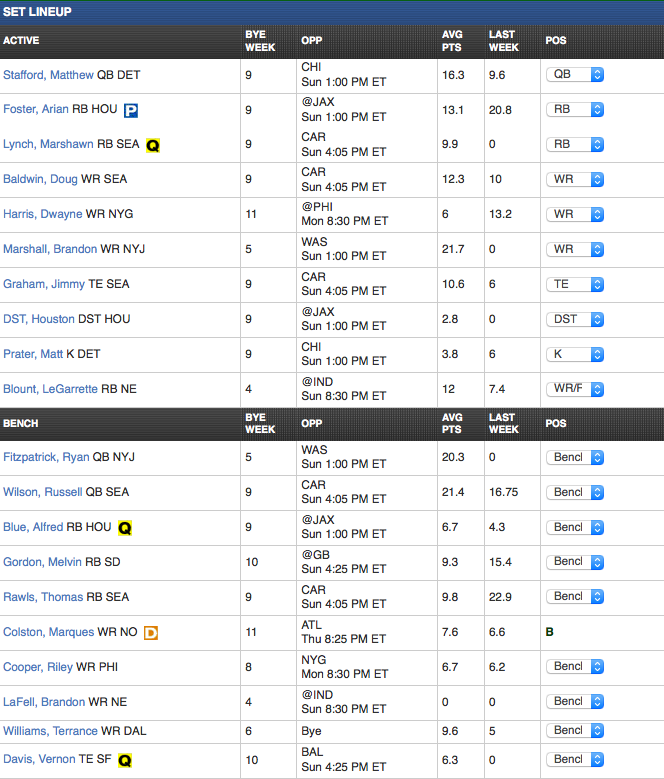 Made a few moves. Added Riley Cooper and Dwayne “The Rock” Harris to my squad. Harris should have an opportunity to put up nice numbers with Odell Beckham Jr. missing the MNF game, along with Rueben Randle playing with a bad hamstring. Also grabbed Vernon Davis who could start to do his thing now that Colin Kaepernick finally looked good after Sunday Night. He is nothing more than a bench player for “Silence of the Graham.” Which is a nightmare within itself, but you have to watch the movie until the end.

I gave up faith in the Bills defense. The schedule is not too pretty moving forward and this team flat out sucks. Their pass rush is not getting there, and their secondary is not doing a thing. Same could be said for the Houston Texans D/ST who I am giving one last chance before I start to go with Waiver Wire Defenses. The Matchup against the Jaguars is not as good as it sounded if this was Week 1, but this is the reason I drafted this unit for this matchup, last chance to show me what they are worth, without Clowney.

Brandon LaFell is a few weeks away from being an every week WR2, Roddy White and Torrey Smith were dropped, which means I will need to add both of them for that longshot pick. Brandon Marshall has been carrying my WRs this season, and while he has been great, he needs help on this team.

The bread and butter of this team. For the first time Marshawn Lynch/Arian Foster will be active at the same time. Arian Foster is looking promising in the up-tempo Texans offense. As long as Hoyer is at QB, the Texans offense will be doing nice things.

Marshawn Lynch gets a huge boost after the Offensive Line finally showed promise and gave Thomas Rawls some HUGE running lanes. Lynch was probably healthy enough to play last week, he is expected to get a full work load and return to the BEAST MODE we all drafted. 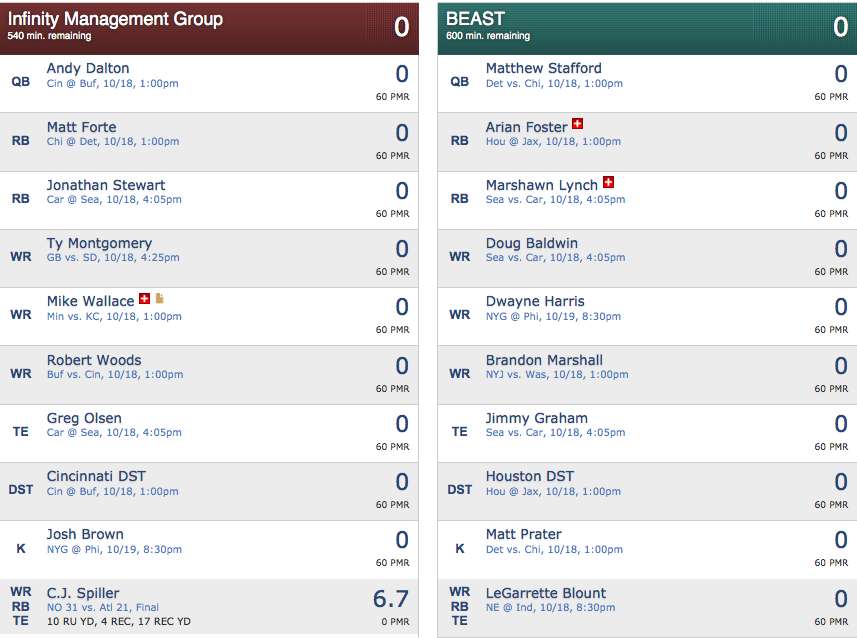 Every game is a big game from here for my team. I should be able to sneak out a win as I finally have a better WR group than my opponent. I also kill him at RB and I expect Stafford to outscore Andy Dalton who will be playing on the road in the rain. Forte could be dangerous with the Lions missing everyone on Defense, but if the Lions D steps up and pulls out the win, I too should get my first win of the season.

Don’t call it a comeback.