The RGIII Strikes Back (WEEK 16)

This is the last week for TEAM BEAST DOME. The story book season of RGIII leading my team, and all BEAST DOME teams to an early 0-2 record. Ryan Fitzmagic was the savior to battle from 0-2 all the way back to 8-5. Joe Flacco was in the mix, Josh McCown got a game in there, and now it all comes back to where we started. 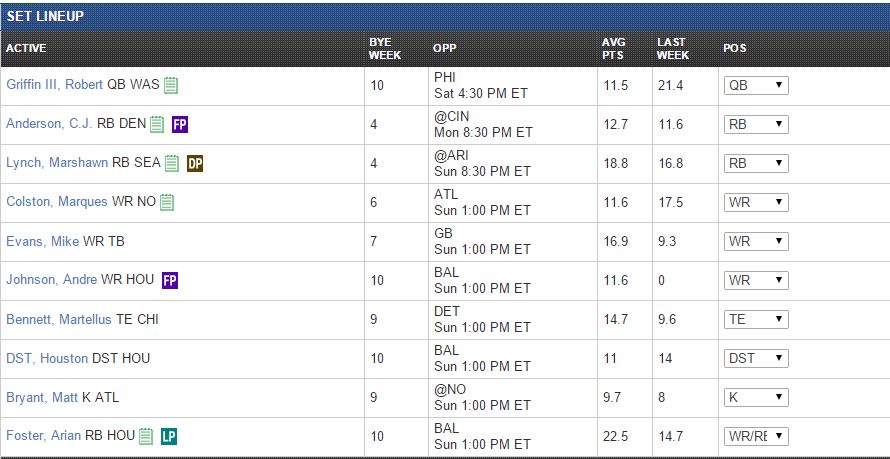 RGIII. How perfect is the situation for him to comeback and lead all of your fantasy teams to a Championship in the end. He has arguably the best matchup a QB can ask for, and is home on National Television for Saturday Night Football. All of his weapons are 100% healthy ready to rock, and this is the last opportunity for him to show what he can do.

Not only is this an audition game for RGIII, but this much larger than that. This is his audition game to be the QB for the Eagles in the Chip Kelly system in 2015. IF RGIII explodes on Saturday, you can guarantee that the Eagles will grab RGIII and re-birth his career.

What makes RGIII such a dynamic fanasy QB is how quickly he racks up points. 20 yard throw here, 8 yard rush here, 15 yard throw there. RGIII gets quick fantasy points, and this is his first opportunity to be the QB since his disaster performance on the road against San Francisco. This is arguably his easiest matchup as well in what should be a high scoring game.

With the matchup being right, let your story book season end the way it was supposed to. RGIII being your QB and leading your team to a Championship, the reason you come to BEAST DOME in the first place.

A lot of people are swaying away from starting Andre Johnson. Unless you have good WRs who have been BEASTING all season long, great go with that option. But if you are trying to get fancy and avoid using Andre Johnson because he is going against the fierce Ravens D with Case Keenum at QB. You first have to look at how Andre Johnson did with Case last season.

There is enough upside in those breakout performance and consistent 10+ targets where you have to take the chance and roll with Andre. Ravens Secondary is not the greatest, Case loves Andre Johnson. I am going with Andre Johnson. Plus it won’t bother me when Arian does not get the carry, hopefully Keenum connects with my guy. 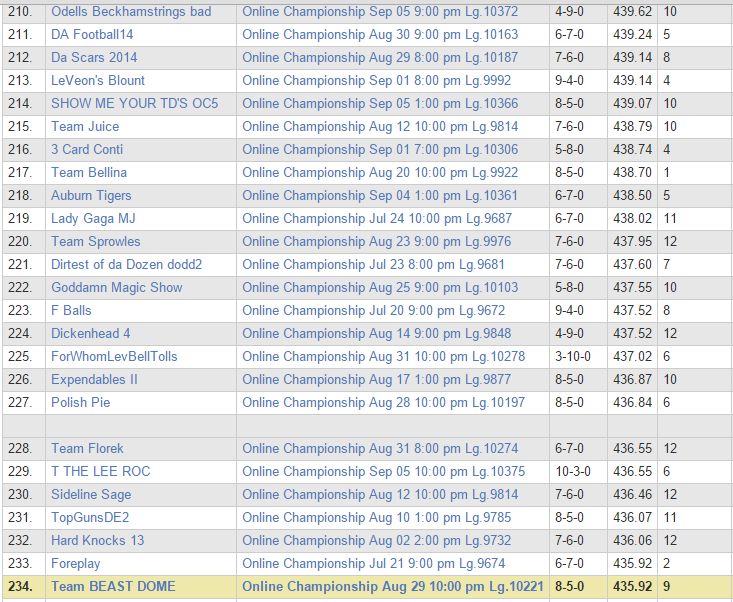 100 Points behind 1st Place. Never say never, but it is going to take a RGIII historic game.