Team BEAST DOME NBA is dominating. If you are not surprised. I have been in 1st Place from nearly day 1, up until last night with the team jumping the standings had a huge breakout night from a lot of players.

Most impressive of all, is my positioning on the Overall Leaderboard for the NFBKC Grand Prize. 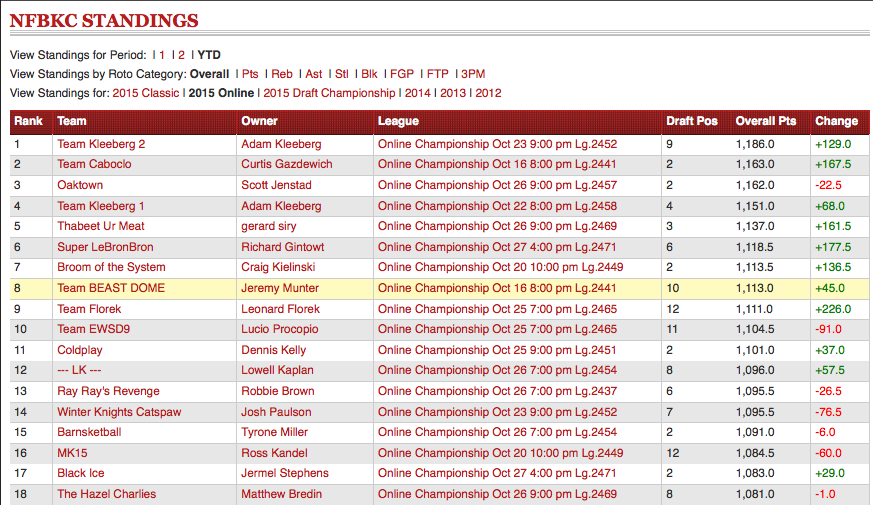 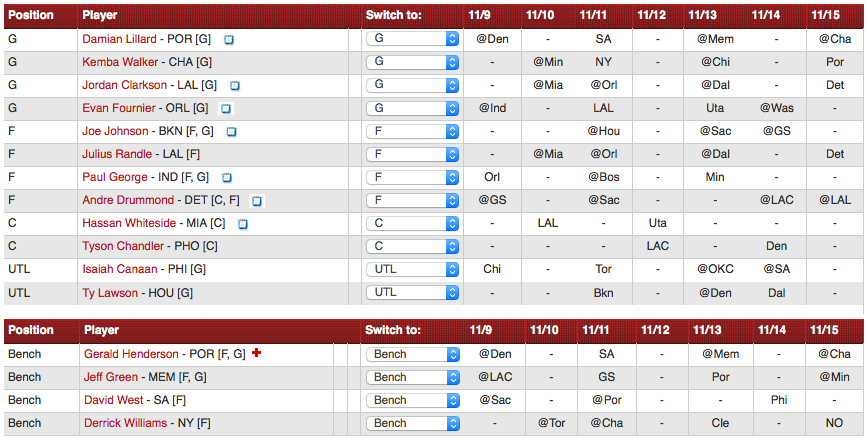 Early Cinderella play from Evan Fournier has helped boost this team early. I hope he can continue his pace, but I did not even expect this. Evan was dropping 20+ with ease a night, up until his last game. There is no doubt he is a “For-Real” shooter. I do expect a drop off.

Isaiah Canaan has lost his starting spot to T.J. McConnell. T.J. is definitely someone to target in all leagues, along with his 3PT stroker Nick Stauskas. Between the two, these guards will offer upside where the Waiver Wire is ultra thin.

Disappointed with the performances of Jeff Green and Derrick Williams. Green lost his starting gig to Tony Allen as Green is not meshing well with the starters. Like I said when I drafted him, he will have a ton of value once Zach Randolph and that knee start to slow down and miss some games. Derrick Williams broke out with 20+ on opening night, now Derek Fisher plays him less than 15 minutes a game. He has to be waived for now. Gerald Henderson is losing value by the second as Al-Farouq Aminu and C.J. McCollum, even Mo Harkless have all carved out nice roles for eachother. Henderson is looking at a nice 6th man role, but I will waive him for the right player. 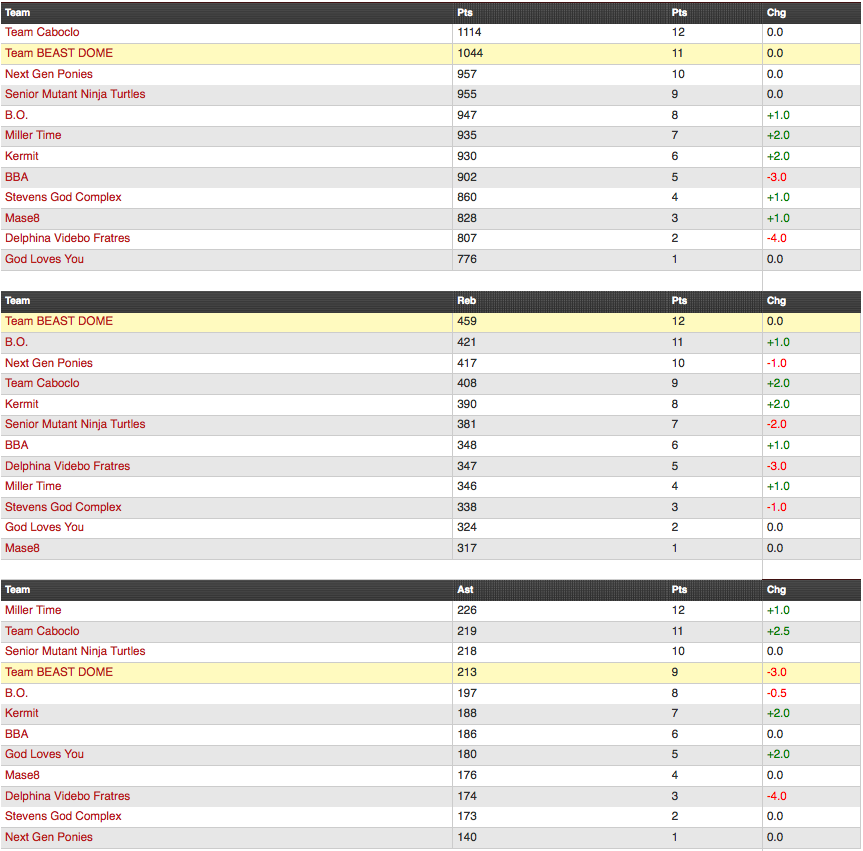 The Main 3. Points/Rebounds/Assists. I was in 1st Place in Assists early in the Week, and 1st Place in Points last night. Still I remain in the Top Tier of all categories. Paul George is really heating up for my Points department, while Damian Lillard has been holding down the Assists and Points. Andre Drummond is a Monster within himself and has dominated Points/Rebounds as well. 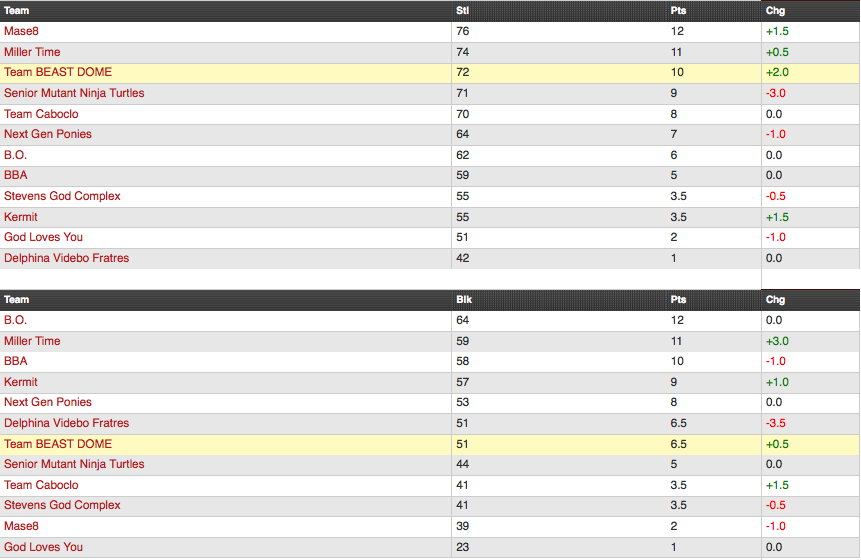 The How You Win Categories. I am surprised I am not more dominant in Block Shots with Drummond/Whiteside/Tyson Chandler. If anything that should make the other teams more scared as I look to gain a lot of Roto Points from that category. 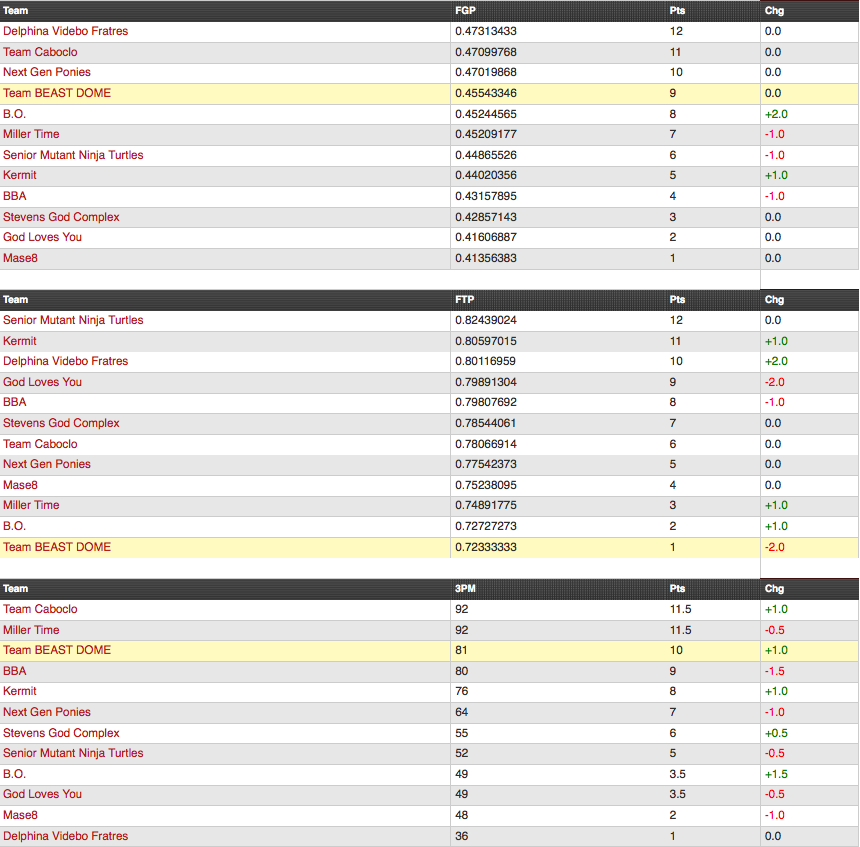 The Shooting Categories. FGP% is only going to go up. Having Andre Drummond and Hassan Whiteside give me two of the best big men in the league for easy dunks. As long as they keep doing their thing and none of my palyers go Ice Cold. I will remain in the Top Tier of that position.

FT% taking a huge hit, the downfall of Drummond and Whiteside. Still I am dominating the league and to be in Last Place in one category but nearly 1st Place everywhere else. I will take it.

3PTM is going to go up after this Waiver Wire Deadline.

Season is going strong. We will do these updates every week. NBA Packages being re-released this week.