These two players were supposed to be the staple of TEAM BEAST DOME and all VIPs. So far both of these players have been nothing short of Bust Picks through the first half of the season. While they have both been Bust Picks, they still have time to turn their season around.

Say what you want about BEAST MODE. He looks 100% healthy and in a season where Jamaal Charles/Le’Veon Bell are both out for the season, while other 1st round RB picks in CJ Anderson and Eddie Lacy are locked in a timeshare, BEAST MODE and Adrian Peterson are the only two clear cut 1st Round BEAST RB’s left. Marshawn is ready to rumble he has picked up a lot of momentum since his early season struggles. Time for him to finish and come out strong at home on Sunday Night Football.

Silence of the Graham, the horror movie, whatever you want to call him, he has been hard to own. Weeks where Seattle throw him the ball, he puts up BEAST numbers, weeks they do not, you wish you drafted and started Benjamin Watson. Coming out of the bye week, the Seahawks better have figured out that if they want to win games, it all starts with throwing the ball to Jimmy Graham and moving the chains.

Another week, another loss. Never did I imagine I would be writing those words heading into Week 10 of the Fantasy Football Season. Despite sitting in the back of the Standings, I do now have two Top 10 every week RBs in LeGarrette Blount and Marshawn Lynch. I have two WRs who I would consider Must-Start in Brandon LaFell and Brandon Marshall, as well as potentially a Top 3 TE every week in Jimmy Graham. Is there enough time to make up the season?

Maybe, maybe not, to answer my question. I can certainly finish in the middle of the Standings, but I am already looking forward to the Playoffs for the Non-Qualifiers (1st-3rd Place) as I will look to cash in what I can from this league. 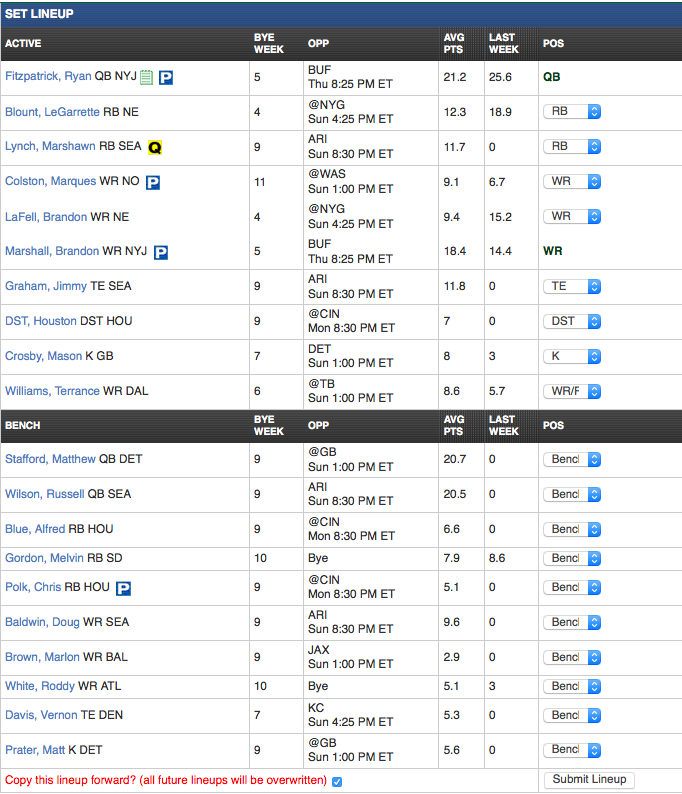 Welcome Arian Foster Jr. I wish.. Polk may or may not play on my team all season, but I will glady grab him for depth just in case the worst case scenario happens and I am desperate for a RB. More likely than not Alfred Blue will get all the carries, but in a blowout matchup coming up this week, would not be too surprising to see Polk reach double digits in PPR. Still, I will stick with Terrance Williams and Marques Colston, who have both been hit or miss.

If you can’t beat them, join them. I was happy to see Crosby was on the Waiver Wire. Even though I am ready to commit to Stafford/Prater for the stretch run of the season, I first want to see what it will be like to have the QB/K of Aaron Rodgers, especially this week, and without the QB. 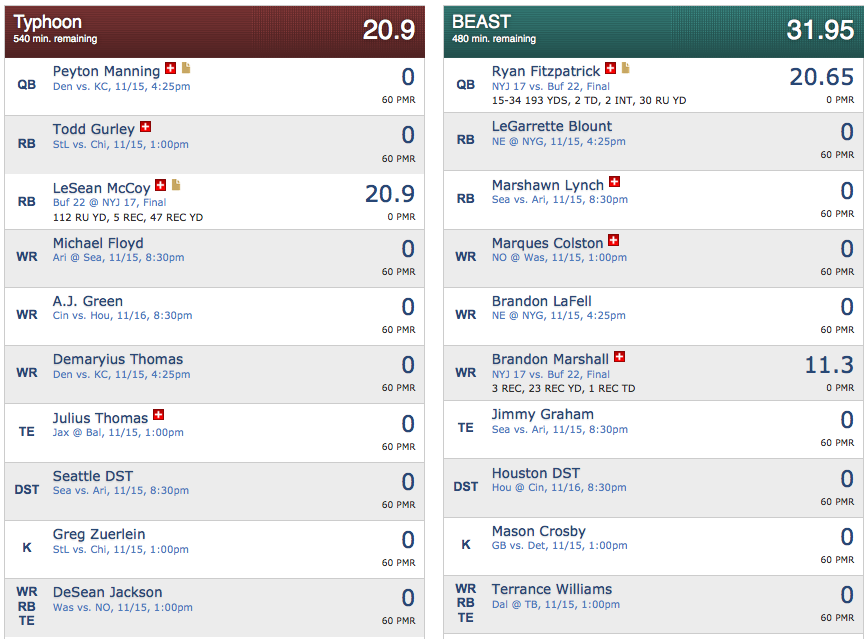 While I have an early lead, I also have a lot to worry about on Sunday if I want to keep it that way. First thing is Demaryius and Peyton, usually this combo kills teams with their eyes closed, this season it has been different. Going up against me, they will probably get it going with Sanders at less than 100%. I need A.J. Green to slow his roll on Monday Night Football and donate his Touchdowns like he did last week. Last but not least, Todd Gurley. This is a matchup where even I rank Gurley as the #2 RB this week.

We will see if my Seahawks can carry my squad on Sunday Night Football.