Raise your hand if your season started 0-2 or worst.

Raise your hand if you thought all hope was lost at that moment.

Raise your hand if your team made a comeback and is now in playoff contention.

Raise your hand if you still believe.

If your team is anything like TEAM BEAST DOME, which most of them are. Your team is going through a very nice upswing that has put your team right back on the map. Whether it was the 4 TD game from Marshawn Lynch last Sunday, maybe it was the Mike Evans breakout party the last two weeks. Regardless of your situation, your season is never over until you are eliminated from the playoffs. 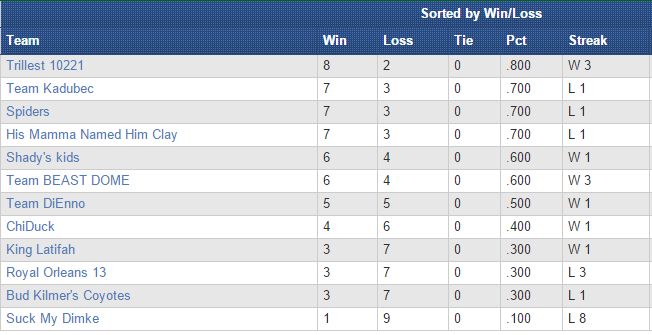 Fitzmagic helped rebound my squad from 0-2 to 6-4. Even though he did not play three of those games, his veteran leadership as well as nice breakout 49 yard rushing game in Week 9 has propelled my team to playoff contention, and now RGIII returns. I now stand two games out of the playoffs, my opponent this week is Kadubec (7-3) followed by Trillest (8-2). When I win both of those games, I should be right in the hunt with a big last regular season game on Week 13 for a playoff spot.

Since it is now or never for this team, and my opponent going through a lot of Bye Week Blues. I decided to snatch up the Waiver Wire even if it meant crossing my budget.

I know Montee is going to be the RB soon for Denver, but like I said. It is now or never for my team, and it is important I snatch up all of the weapons off the Waiver Wire so my opponent has to be dry. Because of my moves to grab Miles and Woods as well as overspend for C.J. Anderson. My opponent now stands like this.

With DeMarco Murray on a Bye. The only move left for him is to start Tre Mason at RB, which leaves him on an all or nothing with Andrew Luck and the Colts offense. Going up against my BEAST SQUAD. 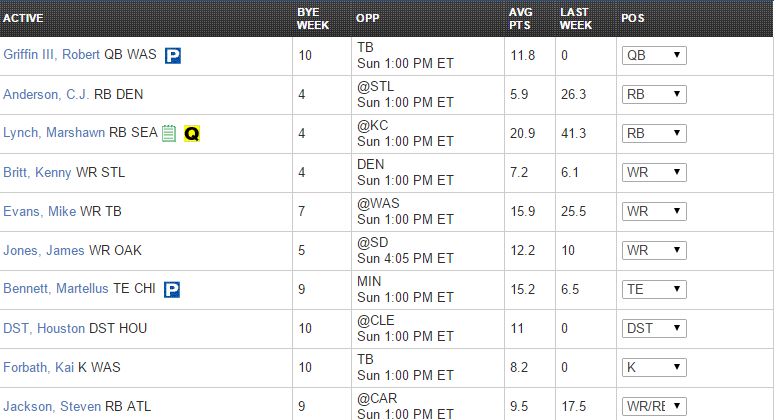 Giving the keys to my team back to RGIII. First time since Week 2 which seems so long ago. RGIII and ‘Ride or Kai’ Forbath are the key to my team moving forward. As long as they combine for 30+ Points my team is money.

I have to bench Arian Foster, which allows the C.J. Anderson move to be that much more important. My WR’s this week are a little risky. Mike Evans has been nothing but a PURE BEAST. No expert ranked him higher this preseason outside of myself. 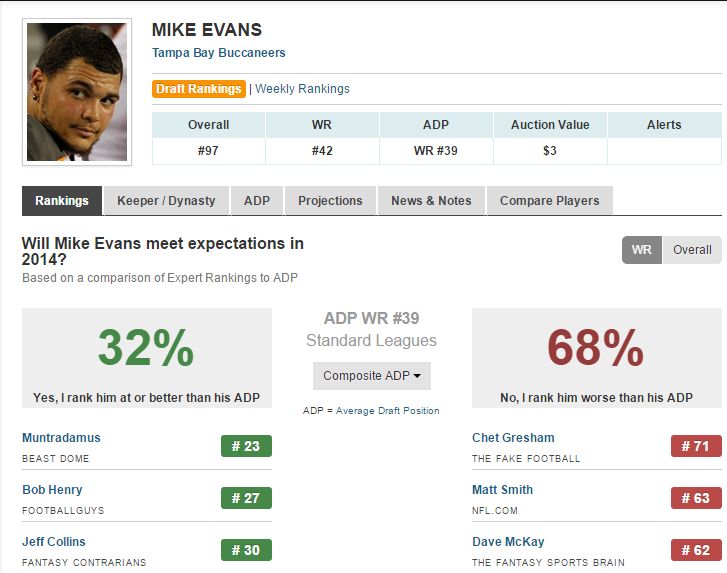 Most interesting thing about my team this week is my benching of a star. 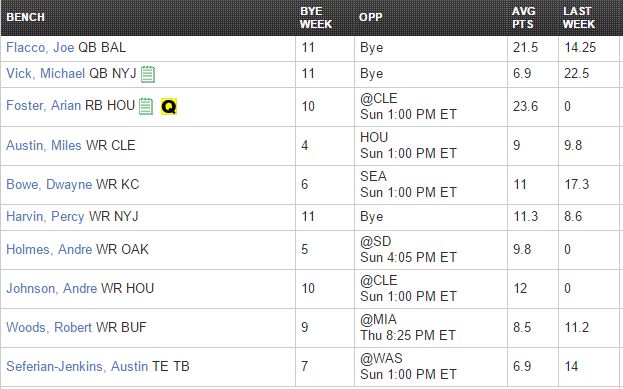 I have to bench Andre Johnson this week against Cleveland. Joe Haden is too good of a DB where the risk is not worth the chew. To make things worst, Ryan Mallett and his first start leaves a lot of uncertainty. The fact Arian Foster is OUT could lead me to be more inclined to start Andre because of the potential, only throw the football mentaility. It is still not worth the risk. I would rather get the safe 6 Receptions and 60 Yards from James Jones than the potential BUST OF THE WEEK performance in Andre Johnson. Joe Haden + Ryan Mallett first start, in a must win game. I will take my chances with James.

My matchup looks good, and as long as my QB/K with some rushing TDs and the occasional WR TD, my team will BEAST another week.

*NOTE. Murray will be subbed out for Tre Mason.*