There I was. 84.5 Points after Thursday Night Football from my Texans that included Arian Foster/Andre Johnson/Texans Defense/Ryan Fitzpatrick and the QB/K with Randy Bullock.

With Percy Harvin/Marshawn Lynch still to go, I figuered I was a virtual lock to increase my 3 game winning streak to 4 games. Then the impossible happpened and the Seahawks forgot that Marshawn Lynch is on the field and ran a completely different offense that involved Russell Wilson trying to be Peyton Manning. The results, 14/28 126 Yards/1 INT/0 TDs, while Marshawn Lynch only saw 2 carries in the 1st half.

This is not the first time Pete Carroll has forgot to run the football with Marshawn Lynch, the other time was Week 2 against the Chargers where Marshawn only saw 6 carries all game. The result, the Seahawks lost to the Chargers. So either Seattle has to wake the fuck up and realize Russell Wilson is only good when the running game is on BEAST MODE, or fall lower in the Standings behind the 49ers. I will choose the first option. 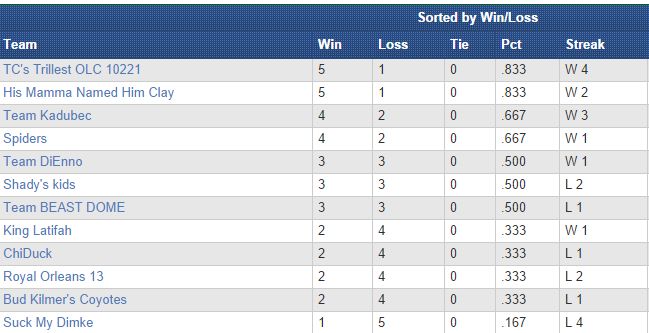 Steven Jackson helped ruin my week as well. First carry of the game S-Jax was a BEAST and ran for 13 Yards. He finished the first drive with 3 Carries for 20 Yards as the Falcons took the early 3-0 lead. Then coach Mike Smith decided that Matty Ice is all they need to win this football game, and S-Jax only saw three more carries the rest of the game. The result, Falcons were dominated by the Bears. Worst part of everything, Antone Smith scored another TD running a little dump pass that works every single time. Why they don’t ever run this play with S-Jax makes no sense as he was the protégé to Marshall Faulk in St.Louis and still posses some of the best hands at the RB position, keyword is some.

Will S-Jax rebound? The answer is yes, that game was obviously a season low and the good news is the Falcons got blownout in the process. Antone Smith role was still the same after the TD as he was seeing limited touches and S-Jax was blocking for nearly the entire 2nd half as the Falcons were in comeback mode. Will the rebound come this week? Maybe, maybe not but I will have to start him to find out as James Jones against Arizona or Kenny Britt against Seattle is not an option. Miles Austin is still on my team, but he is turning more waiver wire worthy as time goes by now that Jordan Cameron is finding his game again.

The past is the past, and now it is time to focus on Week 7.

My opponent is rolling with Aaron Rodgers, and Randy Bullock missed a FG and now goes to Heinz field. Time to sink his battleship as Mason Crosby is probably the most underrated kicker in Fantasy Football today. Only three seasons ago, Mason Crosby was the #1 Kicker selected in Fantasy Football, and last season I ranked Crosby higher than every expert. There is a reason why I was selected best Fantasy Expert of the Kicker Position of the last two preseasons, and following the QB/K is always a factor.

Next order of business is my QB position. While the Ryan Fitzpatrick train helped me win two straight, and could of easily been a 3rd had the following BUST performances above never happened. I have to put Joe Flacco in my lineup against the Falcons. Flacco looked like Peyton Manning himself with 4 first quarter TDs as he was tearing up a Bucs defense that held its ground against the Steelers and Saints (sort of). Regardless, Flacco is going in my lineup as his potential to outshine Ryan Fitzpatrick should not be a hard feat. Especially when you look at what Teddy Bridgewater/Eli Manning/Jay Cutler were able to cut up the Falcons the last three weeks. Captain Flacco, your time is now. 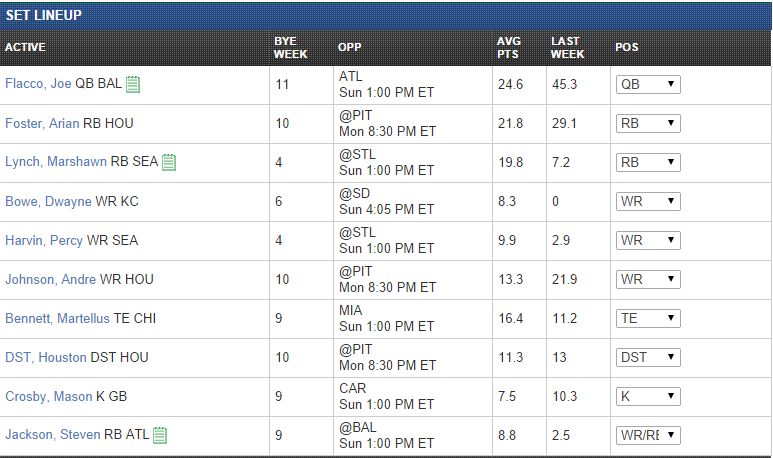 I would have been 6-0 if I would of drafted Steve Smith Sr. who I thought was going to slip through the cracks like he has in 100% of the other Fantasy Football drafts around the world. Would of/Should of/Could of, Dwayne Bowe will have to pick up the Steve Smith slack this week as Mike Evans is on Bye.

If Ray Rice doesn’t hit his girl, if I draft Steve Smith Sr, if RGIII does not hurt his ankle on an invisble defender, this team has championship written all over it, and it is not even close to the original BEAST DOME TEAMS that you can see by clicking the link below and scrolling to the comment section.