TO RGIII OR NOT RGIII? THAT IS THE QUESTION

In order to move forward, you have to step back. Like a Buick commercial my product continues to improve and rack up the wins. Ryan Fitzmagic led TEAM BEAST DOME against the 1st Place team in the league with the victory. It was more of Arian Foster than anything (9 TD leads the NFL), but I always love to give Fitzmagic extra credit. The key to winning my last matchup was the QB/K Combo. If you have not heard of it and this is your first time on BEAST DOME, click the link you will learn something. 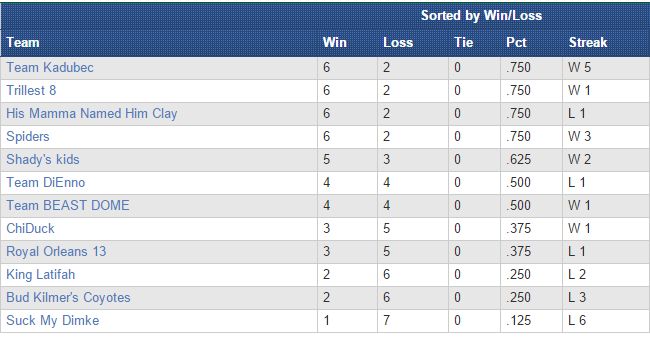 I am still in a position where I have to win every week in order to play for the $100K. Only the top two teams qualify, and the regular season ends Week 13. The good news is I play Kadubec and Trillest before the season ends. Regardless, I have to finish the season with a perfect record. Now it is time to hit the Waiver Wire.

Grabbing Austin Seferian-Jenkins was a MUST. With Martellus Bennett on his bye week, I cannot trust Garrett Graham who has yet to score or a TD or make 5 receptions in a game. It was finally his time to show this week, but I am pulling the plug before he gets a chance to enter my lineup.

I had to add Michael Vick as a Free Agent even though he will never see my starting roster. I do not want anyone in my league to enjoy his upside, and you never know with RGIII anymore and his health. Regardless of how amazing he finishes the season, I will never advise Fantasy Owners to draft RGIII in 2015. He is too much of an injury risk no matter the upside.

Last move was to add Dallas Cowboys D/ST, you can learn more about the unit in the SKYLLZONE BUST OF THE WEEK. The reason I am adding them is for their juicy Week 10 matchup against the Jacksonville Jaguars while Houston D/ST has the Bye Week.

When I learned RGIII was going to return this week against the Vikings I was tempted to play with fire and emotions and jump right in the RGIII bandwagon once again. As good as I expect him to be this Sunday, I have to stick with my veteran Fitzmagic one more week against the Eagles. There is no doubt the Texans will score on Philly, and I want Ryan Fitzpatrick to give my team one last performance before he hands over the keys to TEAM BEAST DOME for what will likely be the rest of the season. If it was any other matchup besides the Eagles, I would jump all over RGIII. But I cannot do it and I am going to stay loyal, similar to Jay Gruden giving Colt McCoy one more start after he beat the Titans in Week 7 off the bench. Like I said a few weeks ago, you can win your championship As Easy as R.G.3.

It may not be popular, but Ryan Fitzmagic is getting one last game. Just make sure you QB/K Combo the move. If you cannot QB/K because Randy Bullock is becoming a popular fantasy option. Then go with RGIII and Ride or Kai Forbath. 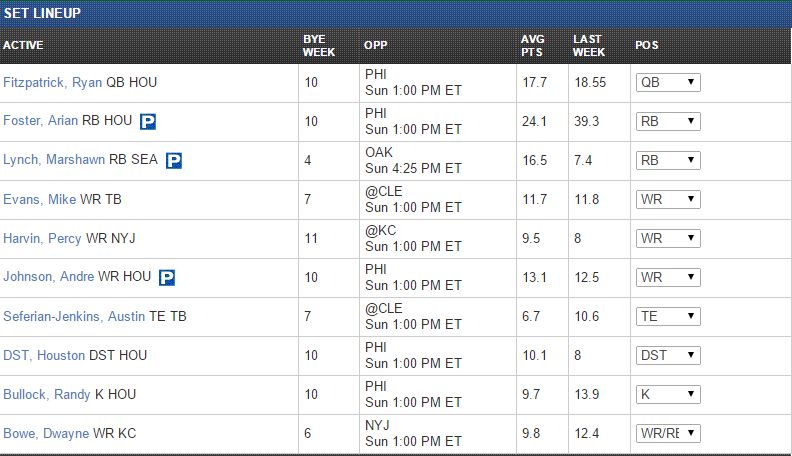 Percy Harvin is ready to jump in your lineups now that Michael Vick is the QB for the Jets. All Jets get a huge UPGRADE with the news including the RB’s of Chris Ivory and CJ2K as the Jets offense has a lot of weapons. It is too late for them to make a move this season, but they will finish the season strong. 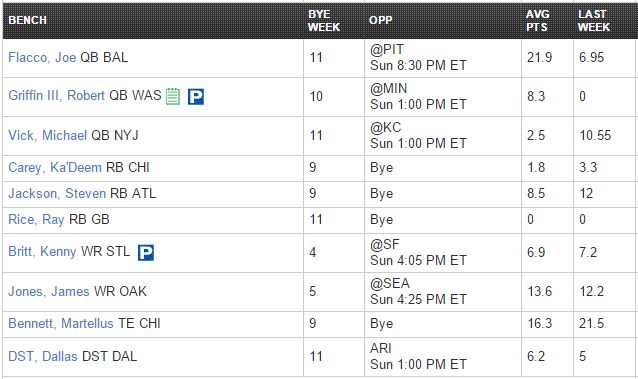 Bench is looking very strong. Martellus is my starting TE. Steven Jackson/Kenny Britt/James Jones are all ready for their number to be called when the time comes. Ray Rice is on my team for show, and Ka’Deem Carey is the future. While you may think this bench is weak, for a NFFC league it is above average.

The matchup is going to come down to two huge factors.

If I win both of those matchups, then I will BEAST another week.

Check BEASTHEDGE.com to track my Daily Fantasy Football on Sunday

Packages are available if you want to be part of the Hedge.