MUNTRADAMUS PICK OF THE DAY:

WITH THAT I GIVE YOU THE PICK OF THE DAY

First game of the season, it is important to start safe. When I say safe, I mean really safe. Clayton Kershaw is going up against the Giants, and if you were sleeping under a Bridge. Kershaw was unhittable all Spring sporting a 0.00 ERA through 21 Innings.

The Giants traveling to Dodger Stadium is never easy. While the new look Giants with Longoria and McCutchen do look good on paper, they will simply not score enough runs in this game to win. The reason they will not score enough runs, is because Ty Blach is in T-R-O-U-B-L-E. Ty Blach does not stand a chance against a HANGRY Dodgers Crowd that wants to get back to the World Series and it all starts with a blowout against their rival.

Even if McCutchen, Posey, Pence, and Longoria are able to generate a couple of runs. (Which is never easy against Kershaw, especially when he is pitching lights out amazing). It will still not be enough as the entire Dodgers lineup can bat through Blach, including the Opening Day BEAST of the Day.

PICK OF THE DAY 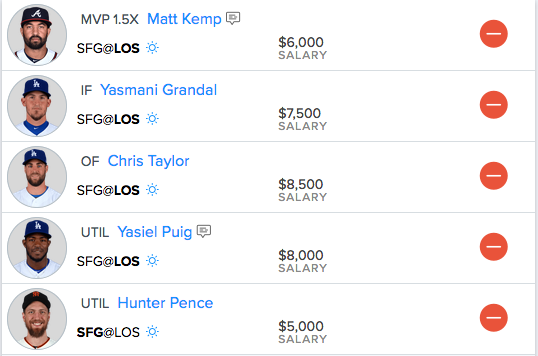