No Fantasy Expert this season went with the strategy of drafting Rob Gronkowski + Tom Brady, outside myself. This is just a sample of what we saw on twitter. 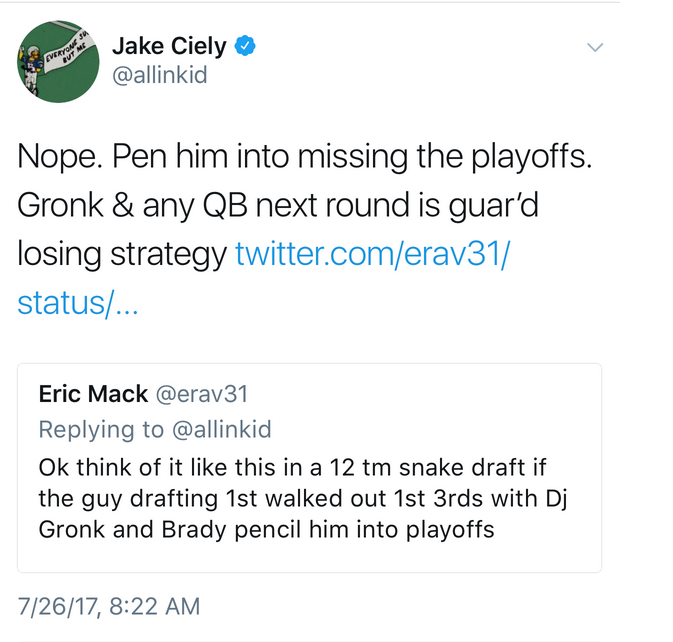 The AFC Championship game is among us. The game that many of the BEAST DOME NATION will refer to as the  AFC BEAST DOME game of the year with Jacksonville’s Defense, I being the only Expert who pushed for them to be a major part of the Draft Strategy, as well as the Patriots led by Tom Brady & Rob Gronkowski was an essential part of the BEAST DOME Strategy as both players are featured in pictures throughout website and nearly all MVPs won their Fantasy Titles.

As we head into this game, we have to analyze both teams and the realistic chance of the Jaguars winning this game.

Tom Brady has a difficult task. Not only does have to deal with the Superior Jaguars Pass Rush, he has to deal with the Jaguars lightning quick Lineback core. On top of that, the All-Pro Secondary that is ready for any and every mistake Brady will make.

The question is, what is the strategy to beat the Jaguars. The best strategy I have seen this year is to try and spread them out deep down the field. They are too quick for a short game and can cover everything within 10 yards in seconds. The deeper you go, the more vulnerable they become as there is more field to cover. With that in mind, the pass rush from the Jags is always a threat to make big plays, which means Brady has to be shaper than ever taking what he can over the middle of the field. Gronkowski should see a lot of Gipson who is one of the best cover safties in the NFL. Still the Jags defense will likely have to double as Gronk is too big for anyone in single coverage.

As the double cover on Gronk comes, Dion Lewis/James White and maybe the return of Rex Burkhead will be wide open. If Defenses decide to watch the RBs, that will leave Danny Amendola and Chris Hogan open over the middle. With all of this confusion within the first 10 yards, one player stands out as the big-time threat.

If the Jags want to win this game, running the ball with Leonard Fournette is not only Option #1, he is Option #2, Option #3, Option #4. Bortles is not a great QB and on the road we could see him make some bad decisions. While his weapons are better than average, the Patriots Secondary is strong enough to cover his weapons. The best option would be to find Marqise Lee over the middle, only if running the ball is not working.

The Patriots Run Defense is their weakspot. The Titans gave up running the ball too early last week. Even in a game where they held the advantage 7-0, they never ran the ball enough to control the clock and prepared themselves into a shootout as opposed to winning a game with their defense and running the ball. If Bortles makes one mistake that sets up the Patriots for an easy TD, the Jags will find themselves in a huge mental hole. Not only on the scoreboard, but in the confidence of Bortles brining the Jaguars back.

When the Jagaurs fall behind, Bortles does not have enough in the tank to bring them back. The only way they can win this game is Leonard Fournette dominating from start to finish, and even that may not be enough with how dangerous Tom Brady can be.