FANTASY NBA BEAST OF THE NIGHT:

RETURN OF THE WHITESIDE (HASSAN WHITESIDE)

Once upon a time I played Hassan Whiteside over 10.5 rebounds over Al Jefferson and the Hornets. Hassan had trouble guarding Big Al which led to a quick spot on the bench. Since that game Whiteside has been dominating teams left and right putting up 14+ Rebounds no matter the matchup. Even with Foul Trouble last night, Whiteside had 9 rebounds.

Tonight the Heat travel to Indiana and take on a Pacers team that does not believe in size. Whiteside will tower over Lavoy Allen and Jordan Hill. Both Pacer big men also play a mid-range game which will lead to easy rebounds and more jump shots.

Whiteside will be the biggest most dominant player on the court, coming off of a back-2-back look for Whiteside to be on the court often as Chris Bosh and his veteran legs take some minutes off tonight. Hassan Whiteside is the real deal and the Books are not giving him his respect.

11/5 MUNTRADAMUS PLAY OF THE DAY 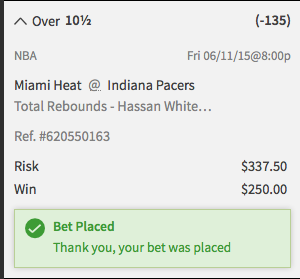 BUST OF THE WEEK (9) COMING TONIGHT