Perfect record on Monkey Knife Fight last week, and projected the correct winner in Justin Thomas of the CJ Championship. ARE YOU NOT ENTERTAINED?!? 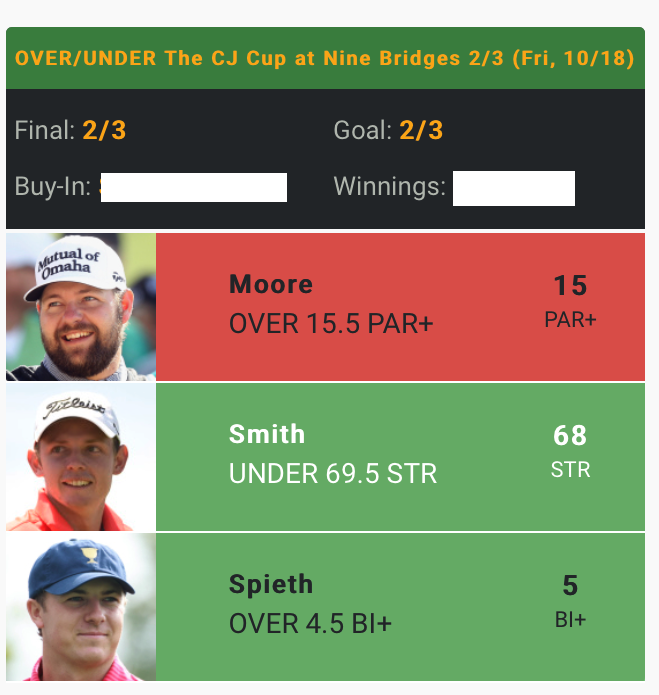 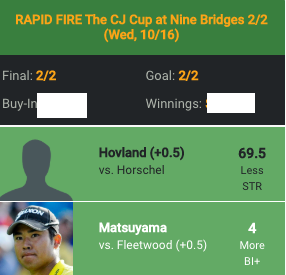 Well, it’s a tricky pick for everyone this week – since we have a brand new venue and no previous records at this golf course to go by. The good news: we have a lot of information to help us see what kind of a tournament this will be, including the Exhibition won by Jason Day on Monday. First, let’s look at the course.

We’re on the south-East Japanese coast this week at Narashino Country Club is one of the few Par 70 courses on the PGA Tour schedule. We don’t see them often. This looks like a much different course than last week. Typically, a par 70 is a tough test (US Open’s are almost always a par 70). However, this course is expected to play at just over 7,000 yards. That’s below average length – even after converting two par fives to par fours. There are 5 par 3’s and 3 par fives. From the look of it, the par fives won’t be scoring holes to the extent they were last week. The 6th looks like a possible opportunity – while the 14th and 18th holes are a bit less vulnerable. 14 looks like a tough bargain and 18 is a sharp dogleg with trouble off the tee. This is another island layout with some wind elements. So, in total, the lack of length doesn’t do justice to the difficulty of scoring opportunities. The par threes will be very important. That’s odd!
The skins game showed us that this course has some incredibly long par fours. Even Tiger and Day were hitting woods into one hole – and there were plenty of mid range par fours that made driving accuracy imperative as well.
There also appears to be multiple / alternate greens on many holes here – which is something you NEVER see on the PGA TOUR. It’s very odd, but could make things interesting! Some courses have layouts like that, but it’ll certainly make for a unique visual test.
So what’s the consensus on this place? It’s a narrow course with a high emphasis on driving accuracy. The greens look smaller than last week, with pronounced tiers and high rough around the greens. The greens actually seem fairly tricky – and the Skins game showed us how severe they can get. I wouldn’t be surprised if the winning score is around -14.
It’s a more accomplished field than last week, to be SURE. We’re also expecting potential rainy conditions. That will be a challenge that could make this an extremely tough test, out of nowhere. Let’s see what happens. After seeing the course on TV, I think it lives up to the challenge it was on paper.
The field, which includes last week’s winner Justin Thomas, is also a 78-man field with no cut.

Last year, Rory was unpredictable. He had some incredible wins and yet he struggled at times. Much was made about his wedge play and his steep action. I think the Skins game was a good indicator that Rory will be tough off the tee here. There won’t be a ton of wedge shots – and it’ll all be about his long game. I think that bodes well for him.

It’s funny, but I think Hadwin has to be a fantasy favorite to win big this week. The only question mark here: how will Hadwin travel? He’s coming off a T4 in Vegas and a runner-up finish at the Safeway. Last year, he finished T10 at the CJ Cup, with a final round 64. He has won on par 70 courses – and he’s a smart, strategic player. Here’s the kicker: Hadwin led the PGA Tour in par 3 scoring so far through 2 events in 2020. Last year, he was average in that stat. The #1 par 3 scorer in 2019? Rory Mcilroy.

With such a strong long game, it’s going to be hard to look at Finau’s game and see him NOT playing well at a course like this. My only question mark is those dogleg left par fours. I think there are some angles out there off the tee that will mess him up a little. That being said, I think Tony is the type of player that will play well after getting some rest – and seeing his friends play in the Skins Game surely gave him some FOMO.

T8 last week. Have to see him as a contender. The Thailand native has strong results all over Asia throughout his career and I don’t see why this week won’t be a great finish. He is a long hitter – and is coming off a decent year, really. He actually played his best golf at international events: T3 in Mexico, T4 at HSBC in Asia – and his best results came at difficult venues. Like Hadwin, he should be riding momentum and feeling like he has learned a ton from the past season (and coming off a top ten).

I’m really sticking my neck out on this one, but I think there is plenty of just cause. His last top 10 (albeit from the summer) was on a par 70 course, at the FedEx St. Jude Classic. I would argue that course has some similarities to this one. Also, I think the number of unique dogleg left holes will favor a left handed player out there. Bubba is the BEST at shaping the ball and that will definitely be a big requirement here. I’m counting on the conditions being tough. I think this course reminds me of Riviera as well, where Bubba has won multiple times. Also, Bubba’s last two finishes, although not spectacular, were steady. That means he might be ready for a more difficult challenge.

he’s coming off a good week where he really didn’t get the most out of his ball striking. I think his consistency and proven history in Asia makes him a good pick. He’ll be consistent with his irons – and I think he’s striking the ball quite nicely. Given his history in the Pacific Northwest and his strong past play in Asia, I think he’ll be comfortable on the zoysia grass and the challenging greens.

This is going to be a very interesting event. I don’t like guys that hit fades because of those sharp dogleg lefts.
Tiger Woods is in the field – and he won a few skins yesterday. He’s got a book coming out, his ex wife just had a baby. I just don’t know. There’s too much circling around him right now. He looked very rusty in the Skins game. I would pick him if there were two more par fives here. He got it going on the back nine in the Skins and I don’t see why he can’t pull out a top ten. Not seeing a win, -6 to -8 would be a good finish.
Tommy Fleetwood is a really good sleeper pick. I knew last week would be a bit of a warm up. Even better? Kevin Streelman. He was last entry into the field. He’s 28th in driving accuracy in 2019 and must be feeling appreciative that he got into the field thanks to a last minute WD from J.B. Holmes.
Adam Scott had a T5 on the Japan Tour last week. I find that very interesting. It tells me he wanted to warm up for this event in Japan – and it must have been a tough test. He finished 5 over par and the field wasn’t very strong – but nobody in the field finished at par or better. It might have been good planning, but I don’t like Adam’s putting at a course like this. He can, however, be a great sleeper pick. The bad conditions at that event might help him prepare for this week.
There’s plenty of Asian players in the field that have potentially played this course before. There aren’t enough translators on stand by to know more for the American audience to hear who really knows the course or not – as there are many unheralded players with local exemptions in the field. That makes this event, and the combination of the first-time venue, a real shot in the dark. Again, we know enough about the venue to make some generalizations – and we know whose hot.
It’s a lush, green, incredible looking layout with fairly flat greens and tall trees. That makes the layout different aesthetically from last week – and also gives players something more Canadian to look at. Thus, my faith in Hadwin. Thus, my trust in the good drivers of the ball and consistent strategists.

-We got a break last week, as they added Cameron Smith to the Ryan Moore/Spieth challenge and that was a lock. Smith played great over the weekend.
This week – I like these matchups for Rapid-fire: 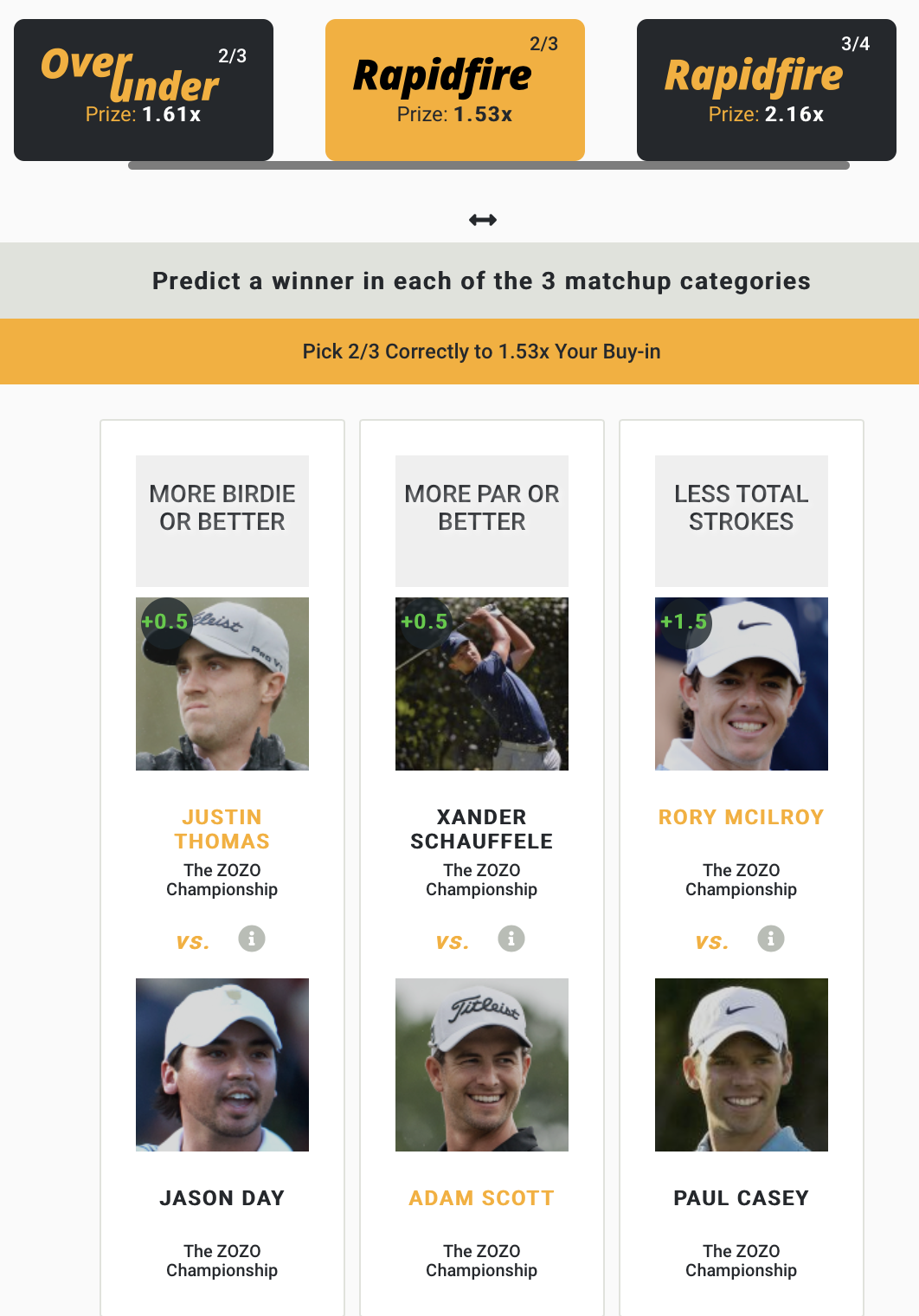 MORE BIRDIE OR BETTER: Justin Thomas (+0.5) v. Jason Day
I think most guys would be drooling over the fact that Day won the skins game, but skins typically are not a good indicator of overall score. Tiger’s past history in skins is horrific. I don’t think Day played that great yesterday – and even though his putter is hot, I’d expect Justin Thomas to come out firing in round one. I think he left a few out there at the CJ Cup and he wants to dig out a low one. This doesn’t seem like a course that Thomas will win on, but I think he’ll come out firing in round one. Have to love the half stroke, too. I think Jason’s poor play last week in rounds 2-4 were a sign of something to stay away from.
MORE PAR OR BETTER: Xander Schauffelle (+0.5) vs. Adam Scott
I think Xander is rusty, and even though this might be a good venue for him, Adam Scott just seems like a guy whose ready for round one. After playing in such a crazy event in Japan last week, he’s already acclimated and his game is obviously seasoned. Scott’s only problem is his short putting – so I’m hoping in round one, the pins aren’t too tough. Usually round one is a little more forgiving. We’ll see what happens, but I like Scott’s experience and recent performance. This one could be a complete topsy turvy, but I’ll take my chances on Scott. Right now is prime time for Australians, as their summer approaches.
LESS TOTAL STROKES: Rory McIlroy (+1.5) over Paul Casey
I like Paul Casey on courses like this but Rory getting a shot and a half should be an absolute lock. It’s hard to tell when Casey is going to do well. He’s coming off a missed cut, but that shouldn’t be the reason he’s off the lineup. I think this course suit’s the eye of Rory off the tee. I think he’ll be in good form. I also like to stick to my guns – and Rory’s my pick to win.