Year after Year, Philip Rivers leads the Chargers either just short of the Playoffs, or an early exit. Year after year, their defense lets them down while Rivers has to be the Tom Brady of San Diego.

Tom Brady of San Diego or not, Rivers has more weapons than most Quarter Backs in the league today. He has the speedy Travis Benjamin. The up and coming Tyrell Williams. The big slot in Dontrelle Inman. The next Dallas Clark in Hunter Henry. Most important of all. Antonio Gates.

The Chargers Offense is the type of offense that can secretly turn into one of the best in the AFC. While Rivers will never be Tom Brady and get those rings, his passing numbers are on the verge of becoming something special.

However if the Chargers are going to beat the Broncos tonight, it is has to be through the ground game and pounding Melvin Gordon. The longer the Chargers can keep that Defense off the field, the better chances the Chargers can win this game. The Broncos run D is solid, but it is nowhere as dominant as that secondary. All bets are off for all WR options in that game, however Antonio Gates turns into Gronkowski when he goes up against the Broncos and will likely lead the way with ease.

While Rivers has his own world to live up to, Trevor Siemian is starting one of his own. There is not a more impressive QB I never expected I would be a fan of heading into the Preseason of 2016. The touch on his throw makes Tom Brady look average. They did have the same QB training coach in the off season, which could be why Siemian looks like the second coming of Rich Gannon.

The Chargers Defense is a joke. Siemian will pick and choose what he wants to do. Chargers should get a lot of garbage time Fantasy Points, best/worst kind in the game. Depending on what side you are on that equation. 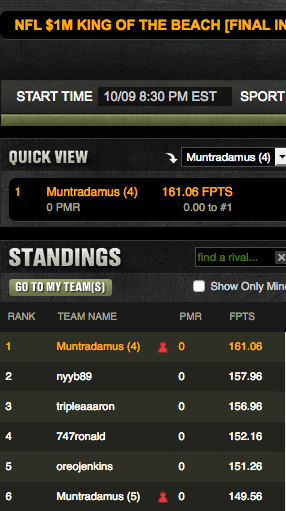