Last season many Fantasy Sites, maybe all, told you to go all out on grabbing Elijah Mitchell. Every site besides BEASTDOME.com.

The Cardinals offense is set to be scoring a ton of points this season. Kyler Murray has taken the next step in his game, which is expected now that he has had a full season of chemistry with DeAndre Hopkins. When you add in the veteran AJ Green who was the 13th Round selection of the BEAST DOME Draft Guide…as well as Rondale Moore, and Christian Kirk. There is very little reason to be surprised to see Kyler taking off the way he is.

However the question remains, is Rondale Moore a BEAST or a BUST coming off of a 114 Yard/7 Catch/1 TD performance?

To be a BEAST, you have to be a WR2 or RB2 status at the very least. Anything better than that off the Waiver Wire you have yourself a legend. Example from 2020 was Mike Davis.

Week-to-Week, Kyler Murray is going to be hovering around that 300 Yard mark all season if not start going higher like he did last with an amazing 400 Yards! While Kyler is definitely amazing, all of his weapons are not the same.

DeAndre Hopkins is of course his hyper-BEAST as mentioned above. Then the Cardinals have a ton of weapons in general. AJ Green from above as well as Chase Edmonds, Christian Kirk, James Conner, and the breakout star of Week 2 in Rondale Moore.

Rondale Moore reminds me of Cuba Gooding Jr in the famous movie, “Jerry McGuire.” Great sports film must watch for everyone who has not seen it. Rondale Moore is tiny and quick and can make a lot of explosive plays. The only problem is Rondale’s lack of field time. He plays like a faster Golden Tate, but being 4th on the depth chart cannot guarantee you good weeks. Not only can it not guarantee you good weeks, but you have to be happy with even 70+ Yards.

Sure there is good upside in Rondale’s game for future seasons to come, but this season in 2021 with the Cardinals WR core stacked with a ton of talent, and a ton of other options that need the ball. Rondale will be nothing more than a WR4/WR3 in Fantasy Football at the very best. If something happens to Kirk/Green or Hopkins, Moore can slide into that BEAST category. Until then, you have yourself a very inconsistent option who will not be fun to own.

WANT TO GET YOUR TEAM ANALYZED BY MUNTRADAMUS FOR $5! 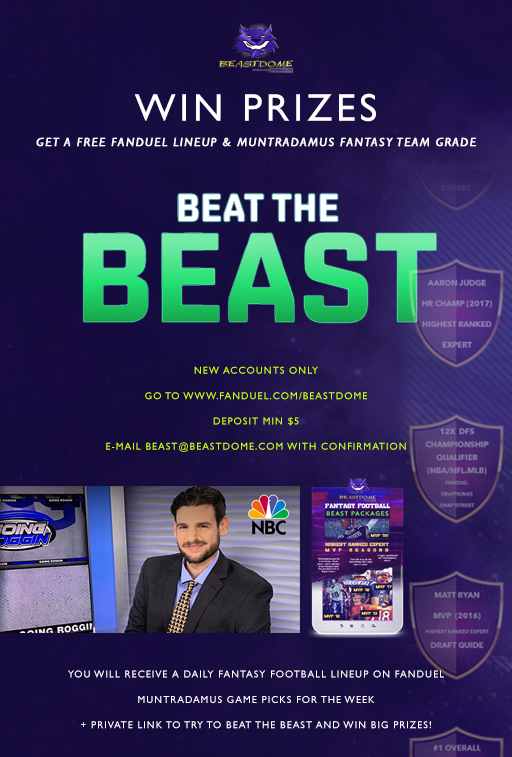 Get 4 new accounts on FanDuel with my promo code